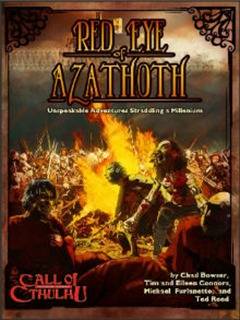 Just in time for Halloween, I received a PDF copy of Open Design’s Red Eye of Azathoth. One of the underlying concepts of the Cthulhu mythos is that the horrors against which the heroes struggle are inhumanly intelligent and incredibly long-lived or possibly immortal. Thus investigators rarely get to see the long term implications of the villain’s plots. Instead, there is the assumption that there’s more history to them than is visible and that if not stopped, there will be further depravities as a result of the heroes failure. Sometimes investigators kick in the door at the very end, just as the great old one is being summoned. Other times they stop some horror or another from gaining a foothold in our reality to commit further mischief. Probably now and again they racially profile some poor outre horror who’s just here to enjoy some opium and loose women on his vacation and end up lopping the poor bastard’s head off. You never can be sure. Given this dynamic, it’s almost certain that from time to time some Call of Cthulhu player says “So what does one of these plots look like from start to finish?” and given Open Design’s patronage model, it’s almost as certain that question was the inception of Red Eye of Azathoth.

Red Eye follows three intertwined long term plots: The denizens of Leng have found themselves a patsy to research a spell necessary to their schemes, who has no intention of being a pawn for his masters, themselves unwittingly manipulated by the servitors of Azathoth. The PCs take the roll of souls forced into endless reincarnation as a byproduct of these schemes and try to put a stop to them before time runs out. A truly epic five-adventure campaign arc, Red Eye takes players through five different incarnations: medieval England, feudal Japan, the Spanish Inquisition, the American colonies, and the wild west. Each adventure works for a stand alone or one-shot. They could theoretically be run in any order, though chronological order is suggested and makes the most sense, since each scenario includes flashbacks to earlier ones that a keeper would have to wing without running them first. Though this multi-era setup has been done before, it’s far from common and this novelty along with Red Eye’s superb execution make it well worth a look.

Eye has plenty of content for the price ($9.99), and the production values are excellent with appealing era-appropriate artwork for each scenario and a clear, mood enhancing layout. However, despite the clear quality, there were also a few small problems with layout and editing that I found frustrating. A good deal of the scenarios revolve around the PCs having flashbacks of their previous incarnations. When one was mentioned in the text it was referred to only by name and number. The actual descriptions of the flashbacks were in appendices at the end of each scenario. While it was a minor annoyance to flip to the appendix and back or print out and keep handy the vision list, I would have preferred them in a boxed sidebar as necessary as well as in appendices. Aside from that, problems were minor. Some maps required a re-read of text to become clear, and there were a handful of typos, half of which could have been caught with a simple automated spellcheck (so I hope what I got was an advance copy). These issues weren’t crippling however. The overall quality was still very good.

The scenarios are well thought out and offer plenty of options for investigation and different play styles. As a product, it’s as much of an enjoyable read as it is a game. Included is the new Incarnum mechanic, which adds an interesting new layer to play by allowing PCs to “remember” skills from past incarnations as well as new monsters, new spells, and new items that can be shamelessly filched for your regular game, such as zombies stitched together into macabre spider monsters, a spell that allows beings to steal another’s visage, and a pistol that’s magic while you chant.

Of particular note are the pregenerated PCs provided for the scenarios. Meaty, with plenty of hooks and potential interactions, I wish there were several more provided with each section, as creating additional PCs with as much potential and weaving them into the scenario as well as the existing ones are is a daunting task, and with only four per scenario, it’s likely a fair number of groups will need more. Most of the pregenereated PCs have hooks for interactions, intra-party conflicts and side goals. Unfortunately, relatively few of these are specifically called out in the scenario as written, leaving interweaving them into the story up to the keeper and players.

Red Eye of Azathoth is a well executed beautiful work with plenty of material to steal for your regular game and a rarely attempted but expertly handled setup. If you’re a regular CoC keeper, this is a product you’ll want to get your hands on. By basic math alone, this is a collection of five professional quality linked one-shot scenarios at $2 each. How can you afford NOT to buy a copy?

3 Responses to Red Eye of Azathoth