Have you ever had your knowledge of reality interfere with your acceptance of genre conventions?

Gamers are usually pretty nerdy, and tend to know quite a bit about gamer-ish topics, sometimes down to a very granular level. RPGs usually emulate genres better than they emulate reality. A GM’s detailed knowledge of reality can conflict with a game that is based on a genre that may only barely resemble reality.

In reality, the katana was the best sword that could be made on an isolated and very iron-poor island nation. Its manufacture used many labor-intensive techniques to create a weapon that was both flexible and sharp, and that worked well against the reinforced lacquered leather armor of the day. It was nothing extraordinary, being roughly comparable to many of the swords of its time period, and performs rather poorly against metal armors. 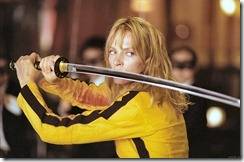 In fiction, however, the katana takes on nearly supernatural powers. It can cut through chainmail like butter, plate mail like paper, and grant a +2 Charisma bonus to its wielder. Reliable sources say that it can cut through a tank. The biggest testament to its awesomeness is the fact that the katana is the preferred melee weapon of most 1980s action stars.

What are your genre conventions?

So, is a katana just another bastard sword, or is it the melee version of a tactical nuke? It depends on the genre and conventions that your game is based on.

This is all good fun, but the point is that you should define the genre and conventions for your game. Do chandeliers support characters? Does body armor take minutes or seconds to don/doff? Make sure everyone at the table knows what the genre implies, and that the rules encourage gameplay that emulates the genre.

When a situation or question arises, resist the urge to answer based on reality. Try to go to the source material first. Picture the scene in a movie or book of the appropriate genre, and imagine how it would play out. I used the katana, but other examples include how injuries and healing work, the effects of combat on the human psyche, computer hacking, etc.

Have you stumbled over the conflict between reality and genre? Got any advice or stories about it? Sound off in the comments and let us know!

24 Responses to Reality vs. Genre