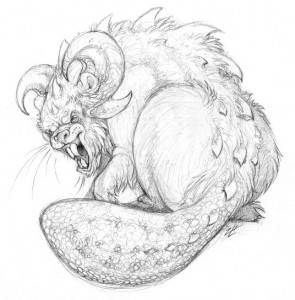 I once ran an adventure that resulted in a TPK. Darn Hodags. Everyone rolled up new characters and wanted to take it on again. It was a playtest, so that wasn’t a big issue. However, I wasn’t quite happy doing an exact reset and sending the players through again. I didn’t think they would be able to resist knowing where the secret doors were or having their characters come up with surprisingly relevant guesses.

Solution? I advanced the timeline of the world and set the party up as a reserve team sent in to find out what happened to their predecessors. I kept things as they were at the time of the adventure end and added in a few more challenges. I essentially re-molded the adventure as a subsequent encounter. The group had fun “discovering” what occurred to the previous party and making snide comments about the people who obviously weren’t good enough to get past this trap, or just barely escaped from the cave-in that occurred.

Doing this started me thinking about ways to re-mold already written adventures in order to use them again. Here are some of my thoughts.

Like the example mentioned above, setting the group in the same location after some time has passed can lead to some interesting twists. Evidence of past battles and encounters will probably show up the second time around, giving the players the chance to relive old glories or comment on past failures. New adversaries might occupy the space now. Maybe a ragtag militia has moved into the fort after hearing the characters had cleared it out. Maybe opening the secret passage into the under-tombs gave creatures unknown an entrance into the above-world. Many elements about a location could change based on the passage of time. Re-molding an adventure in this way makes the world feel alive and full of changes. It can also make the players feel like their actions have an impact and effect. On the downside, it also requires the Game Master to remember many of the details of the past adventure.

Sometimes you just don’t have time to whip anything new together. You might have an adventure that you previously created, or be using one out of a magazine or supplement but it doesn’t quite fit with what is going on in the story. Use it anyways and change any necessary thematic elements in order to make it feel different. An army of Goblins rushing out from a hole in the ground isn’t necessarily that different from a bandit group that hasn’t eaten for a few weeks rushing out of the woods. A trap that shoots magical fire from the mouth of a statue isn’t can do the same damage as an exploding mine or a stream of napalm set on fire.

If it has stats that work, you can apply any skin you want to an adventure. The key to re-skinning an adventure is locating the elements that need changed and making them fit. If some enemy or encounter has a special power that won’t work with the new skin then remove it or switch it out. If the layout of the dungeon seems too familiar, turn it upside down or change the locations of some doors. Don’t be afraid to make major changes in order to match the new theme of the adventure.

Islands Out Of Time

I’ve brought this concept up before in a previous article, Island Design Theory, and it applies here in a big way. If you arrange all your game elements as little islands that can be moved around to suit the ever-changing story, it makes it easy to incorporate old elements. If you stat out a location and keep it as separate piece of info that isn’t inherently tied to any one thing, then you can move it into and out of the game as required.

Does it make more sense, based on the character’s failure to stop an invading army, to have a village be ravaged and destroyed instead of whole and intact as written? Cross out the names of 1/2 the NPCs and use it with a different description. While the original plan might have called for the PCs to rest at the village after having derailed the invading army, it doesn’t make sense given the story changes. The element needs remolded. If you’ve designed it as a standalone element, which can be moved and changed, then it is easy to make the necessary adjustments.

One adventure I ran needed an interesting end-point. The PCs had been all over the world of Eberron and changed the political landscape so much that it didn’t fit for the final adventure to take place as it was written. It also didn’t fit for the PCs to give the final blow to a crumbling empire. They had set plans in motion that caused massive financial and political failures. Why would they just waltz in, take the blame and reveal their hands now, as their end-games played out? The solution was to have them write up some new characters that just happened to get involved. It gave the players the chance to play with some nifty powers not available to their current characters, and it allowed them to see the story through some-one else’s eyes.

This can also be a good way to add some replay value for players who have gotten too powerful to game within the sweet spot. Often players enjoy getting to insane power levels, but find that the play at that level doesn’t feel as fun. Using different characters for a session or two can provide some of the previous play experience while not revoking the player’s hard earned rewards.

So these are a few of my ideas on how to remold adventures and game elements for re-use. What do you think? Have you used any of these methods before? Have you re-used an adventure? How did it work? What other methods can you think of for re-molding game elements?

5 Responses to Re-molding an Adventure