Have you ever kind of just been waiting in line to get into the rad nerdy board gaming bar with your friends after playing D&D and the wait-list is like 1-hour long (but you’ve already been waiting for a half-hour so you might as well stick it through) and you think “hey, maybe I should just run something but I have nothing prepped whatsoever so what will I do” and you decide “y’know what, fine, I’ll totally do it” and you want to run some random one-shot about high-schoolers fighting zombies but you don’t know what to do? Are you also a fan of run-on sentences? 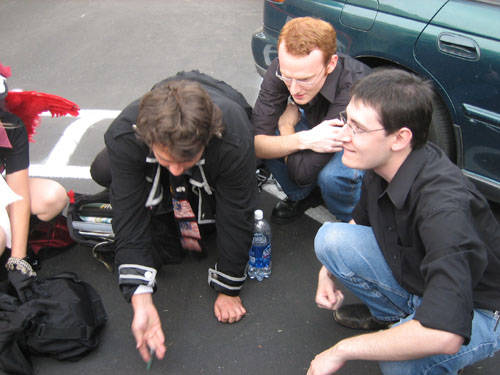 pictured: people I don’t know from the internet

Welcome to some Quick & Dirty GMing, where the stakes are low but you still wanna run something fun while everyone is waiting.

What are you going to need?

Why do we need dice?

If you wanted to do a storytelling thing, that’s fine, but I find the most compelling part of tabletop rpgs to be the fact we roll dice and let it decide our fate. As much as folks like to imagine they’ll decide whether or not they’ll fail at something on their own, it’s a storytelling skill that needs to be developed. Plus, it gets rid of the situation where people might argue over where the story should go.

Did you ever have to deal with that kid in the playground that changed the rules as they went along? “No uh, actually you’re on fire now and all damage I took reflected on you.” Now imagine that kid as a full-grown adult and capable of presenting an articulate argument.

Why do we need a system?

If we’re rolling dice without a system we might as well flip a coin to decide success/failure. While that’s totally a fair way to handle that, I don’t really believe it’s all that interesting. Players like feeling smart and that they’re doing something right or unique. If everyone is equally good at everything, then no one gets to feel like they specialize–no one gets to feel like they have a role in the whole ordeal.

Let players feel clever! Let players specialize! A system, even a super basic one, does exactly that.

When running a Quick & Dirty game you want something you and your players can glean over in a snap. When it comes to that, there’s nowhere better to look than a one-page trpg that you can just save as an image on your phone. Text it to the group chat and bam, they know how to play. There’s a ton of one-page trpgs out there but my favorite line tends to be under one of three:

Lasers & Feelings is the sort of magical game that, while alone is pretty amazing, ended up inspiring dozens of ‘hacks’ using the mechanics with new and interesting settings. Seriously, google “lasers and feelings hacks” and you’ll constantly find something new. Here are two repositories for such. It was also based on this song by The Doubleclicks. Warning: it’s adorable.

Honey Heist kinda came out of nowhere around 2017 and, like the honey being heisted, kinda stuck? It’s about criminal bears Ocean’s 11’ing a honey convention. What more do you need? Perhaps the fact that Critical Role ran it as well?

OKAY SO LIKE Risus isn’t exactly a one-page trpg, as it exists as a six-page pdf. However, it’s super clean and easy to explain to players and even easier to run. It’s been free forever and has actually developed a pretty devoted fanbase for its clean and flexible gameplay. It’s honestly super easy to convert anything ran in Risus into a campaign with the same system.

And the best part is that they’re all free!

With a system, even a simple one, comes complexity. That means you need to track character sheets; what better way to do that than an index card? I typically keep a stack of index cards on me at any time to run games. I’ve honestly done impromptu games at a bus stop if I have a long enough wait time. With index cards, dice, and a handful of pens you can literally turn any awkward amount of time into a roleplaying opportunity.

Quick note: I only advocate for the use of pens. Pencils are dumb and smudge up everything. The only time I touch one is when I absolutely have to.

When it comes to the Quick & Dirty game, you won’t really have any time to prep anything. That means you’ll hit the ground running, improv-ing only steps ahead of a collapsing ground behind you. Remember that this is all for fun and literally throw in every silly trope you can think of from every piece of media you’ve absorbed. The characters are running from zombies in the mall? The local nerds have set up a safe-zone in the anime store armed with metal cosplay weapons.

Be [Yes++] and maybe your improv-ing can be improving as well.

I like tabletop rpgs; I think a lot of people do. The main concern I always hear is “there’s never enough time” and “it’s hard to schedule” and they’re right. But it doesn’t have to be. Not everyone in your gaming group has to be present to have a good time. Not every game has to be emotional or super narrative-heavy. Sometimes people just want to laugh with their friends, eat snacks, and throw some dice around and I don’t think we should put any less value behind those kinds of nights.

I also don’t believe we need to place our ‘real and serious(TM)’ game nights on a pedestal either.

Throw dice, do something stupid, and have fun. Be a Quick & Dirty GM and be proud of it. Your players, whoeverÂ they are, will appreciate it.