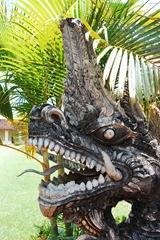 If you’re like me you’ve found yourself thinking the following: “I need to make an encounter table for this area. It’s a swamp, so I’ll just go though all my monster books and make a list of all the monsters that can live in swamps…” and then three pages of paper and way too much time later you succumb to information overload, shelf it and go do something else. A simple template can help reduce option paralysis and provides structure for an encounter list. Guidelines can also ensure enough diversity without over-planning too many encounters.

Life Level:
How alive is the area? How much diversity of plant and animal life is there? How much is there overall? Verdant forests, fertile grasslands, and vegetation-choked swamps all have high life levels while scorching deserts, rocky badlands and frigid tundras all have low life levels. The higher an areas life levels, the more slots should be in your final encounter table, and the more entries of each type.

Hazard Level:
How dangerous is it to live in this area? Do things live brutal short lives? Do you want lots of dangerous creatures? Is the area itself deadly? Different from life level which measures how many things and types of things live in an area, hazard level measures how often the things that do live there die.  Deadly mires, inhospitable crags, and plague pits all have high hazard levels.  Elven glades and  carefully tended farmlands have low hazard levels.

Difficult Terrain Density:
How easy is it to move around the area? How maneuverable do you have to be to chase or evade prey? Can you take an afternoon jog without breaking your ankle or falling to your death? Jagged rockpiles, sinking bogs and dense forests all have high difficult terrain densities, while rolling grasslands, ancient roadways and sunbaked dirt flats all have low terrain densities.

With these characteristics in mind there are six ecological niches in which encounters can fall. In general one to four encounters from each niche will create a complete list though this can be tweaked to work with particular games, campaigns, and areas.  In general the higher an area’s life level and the lower it’s difficult terrain level, the larger the group it’s inhabitants should form.

Herbivores:
In this context, we’re defining herbivores as “Creatures that eat the environment” so while traditional herbivores fall in this category, wildly different environments like mine shafts, abandoned building, alternate planes and the like will have different sets of “Herbivores”. For the most part, we’re only interested in big nasty herbivores that regardless of whether they want to eat you or not will kick your ass for looking at them funny,large groups of herbivores that will trample you when spooked, or otherwise dangerous creatures. Rabbits are simply not an encounter unless they’re vorpal (and they’re still not herbivores).

Predators:
Usually predators are the most dangerous creatures in an area because they have to be able to kill and eat the rest of the population to survive. Again, depending on the mix of other creatures, what qualifies as a predator can be unusual. In a primal forest populated by plant creatures, that moose may well be your alpha predator.

Scavenger:
Creatures that eat other  dead creatures but aren’t above an occasional fresh meal, there are a huge variety of scavengers but they’re usually underrepresented in gaming resources especially for odd environments.  In a pinch lower level predators can fill the role of scavengers. The higher an area’s hazard levels the more scavengers can be found there.

Hazards:
Hidden deadly creatures such as vipers are hazards. Adapted to live is a high competition environment by being super lethal, but not super durable, they can often be handled as traps or skill checks. Unlike other encounter types, these are usually found singly and are most often found in areas with high hazard levels. Though most items on the list are creatures, hazards can be inanimate objects such as quicksand, pits etc…

Humanoids:
Able to live anywhere, there’s usually at least one group of humanoids living in or near any given area. Places will be hotly contested, and thus be home to more humanoids if they have high resource levels.

Elementals:
Some creatures have no ecological niche but live in areas simply because they are part of them.While this includes elementals, it might also include golems, fey, robots, or other weird creatures that are tied to a certain area and fall in no other category.

Now you should have a list of creatures appropriate to your area that fill a variety of roles.  All that’s left is to put them on a table. Chances are there are one or two too few or too many to fit a convenient number, so just ditch a few or grab a couple of your second string choices, toss them on a table and you’re good to go.

A brief note on die choice: With a single die, all outcomes are equally likely. The more dice you use, the greater central tendency of your roll, and the rarer the high and low values. Using dice of unequal size on the same roll will create a small “plateau” of probabilities in the center. It’s in no way essential to sit and crunch numbers, but keep in mind that if you use 5d6 for your table, the probability of rolling a 5 or a 30 is .01% so don’t expect to ever see it. 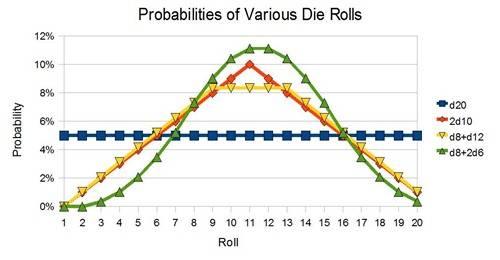 Here is an example using Fenwood from my Location Template Article: