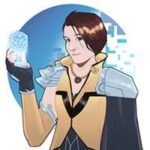 As the weather promises to warm up here in Chicago, I dream of venturing forth – gaming with Northside friends, demoing at game stores, and playing in parks. I enjoy running roleplaying game sessions that bend the traditions of my usual 4-hour game nights. This can be by doin’ it in weird places, for varied lengths of time, or with different sorts of people. I love this hobby and I want it to grow – these odd little “pop-up” roleplaying experiences I’ve run help me get the word out and introduce new people to my favorite games and to gaming in general.

I simply use the term “pop-up” here to represent game experiences that are ephemeral and often on display. I’ll talk about a few kinds of pop-up games I’ve run to give you inspiration for trying it out yourself, but please comment with some other interesting ways to shake up your play! 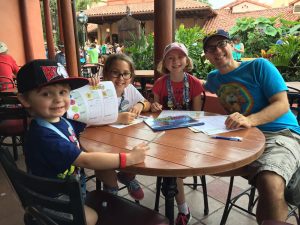 Take your game night and place it in a new context: a Denny’s, a hotel lobby, a bar, or a park (bring paperweights!). It’s a fun experience for the group and it’s a simple way to showcase the hobby to new folks. James August Walls (at rightÂ with his players/children) introduced the initiative of #GetOutAndGame in this YouTube video, and has since run games in places like restaurants, parks, Renaissance Fairs, and Disney World.

At Grand Rapids Intrusion, a semi-formal Cypher System convention, we played a bonkers 9-person game of Fate Totally-Not-Star-Trek late into the night in the hotel lobby. A few other hotel guests asked what on earth it was we were doing, and we got to have a minute to laugh and explain what RPGs are, our ridiculous story, and the fact that we’re all friends gathering to play RPGs for a weekend.

I imagine that various forms of LARPs might take place in public spaces and also be able to get the word out about our hobby, but sadly I haven’t been able to have a LARP experience yet. Please chime in with comments if you have some thoughts! 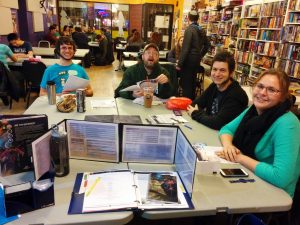 Another form of pop-up roleplaying is to go to a public place and open up your table to total strangers, where you aren’t sure there will be demand. This is probably familiar to you if you’ve ever run or played in demos of a game at a comic book store or hobby shop. I’m a member of the Monte Cook Games demo team called the Asset Team, so I semi-regularly run demos of this nature. This is a great way to introduce gamers to your favorite system or setting and meet new potential players and friends. It’s easiest if there’s a pre-existing game night you can slide into, but I’ve also had success with just asking a store owner to keep track of folks who have signed up for me. Be sure to encourage players to buy product from the store you’re in if they can!

My nanite-sense tingles when I hear that someone might be willing to try out my favorite game, the far-future, science-fantasy, delightfully-weird Cypher System game Numenera, so I’ve also run severalÂ unplanned pop-up demos in person. At Gen Con last year, there were a few attendees who came to several of my scheduled Numenera games with generic tickets hoping to get to play, and unfortunately weren’t able to get in at any time. Unwilling to let potential converts go unproselytized, I invited them to my AirBnB for lunch and rounded up some of my roommates to fill out the party. I ran a 1-hour version of my con adventure while cooking quesadillas for five players and myself. Not having to roll dice as a GM was a huge benefit! 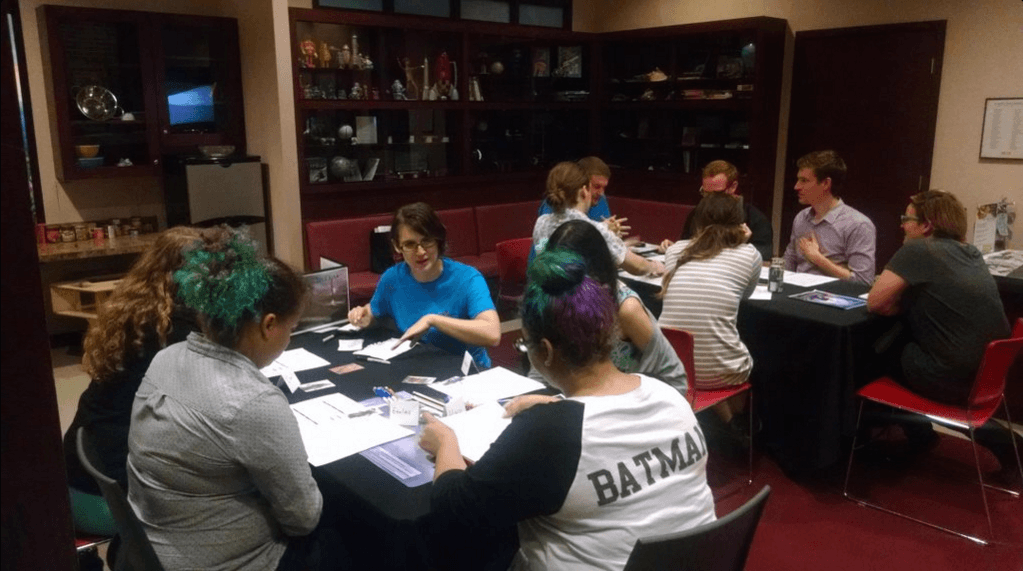 Let’s play with that time limit! One of my favorite pop-up experiences was running a lightning-fast series of 30-45 minute demos of Numenera at the Adler Planetarium for an adults-only nerd night “Adler After Dark.” The theme was gaming related and we ran some Numenera in Spaaaaaace for the attendees. We were the only room running roleplaying games and, though we were not expecting it, there was a huge demand for it. Partly because the commitment was only half an hour, almost everyone we asked was eager to try it. With two GMs running a table at a time, we churned through what must have been 40-some players in a few short hours, and that was only a fraction of the people who wanted to play.

With such an intensely short session, the energy levels had to be high and, as another GM John Harness put it, we had to skip rocks: go fast and not deep, just touch the rules where we needed to. We didn’t explicitly leave out any rules, but we only explained the core mechanic and what the different pregens were like before we bolted out of the gate.

One major joy of this experience was seeing tons of totally new gamers just rock it: they took bold and exciting actions, got into character, and had really fun moments of drama arise between their characters. Lightning-demos are a fun test of your flexibility as a GM – whatever the adventure is, you want to cater to this particular group of strangers that you just met. It’s a really fun experience as a GM and I highly recommend it.

Go Forth and Game

There’s lots to be said about how to prep adequately for some of these interestingly-constrained games, and lots of people have said it. I wrote a bit about my one-shot prep on the Monte Cook Games blog, Chris Chin has outlined some advice for running 90-minute D&D, and Scott Martin wrote some advice on prepping for Introductory Games for New Roleplayers.

Thanks for reading. Please comment with anyÂ odd gaming formats that I haven’t heard of, or with some advice for these situations!