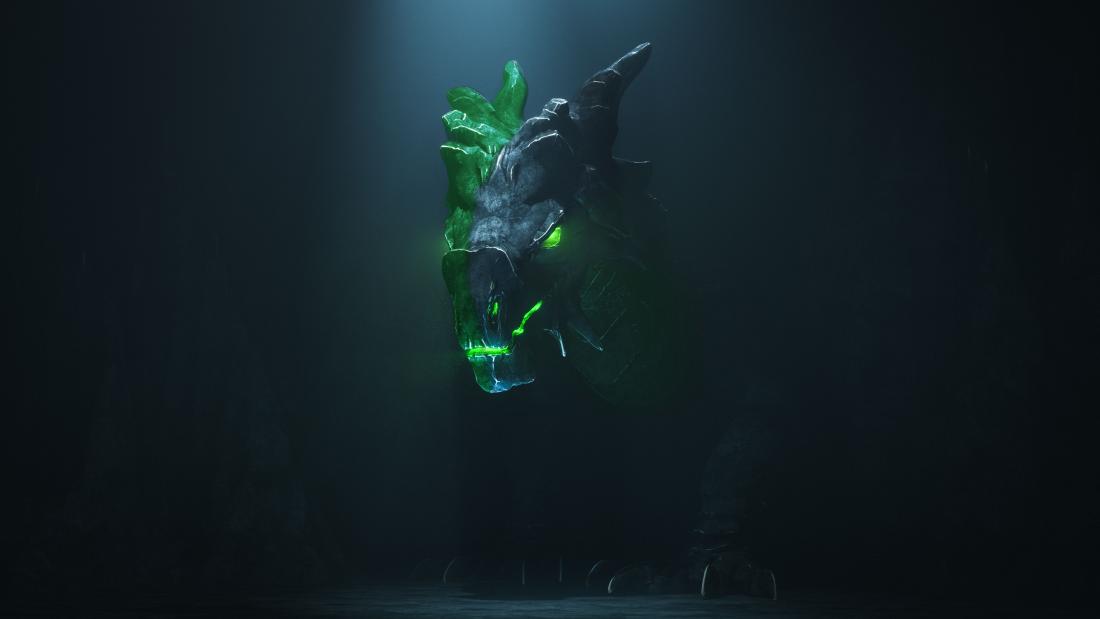 Looking to do something different every once in a while from my usual Monster Combo articles, I came up with a new idea. I would grab D&D monsters, detail them, give them a complex backstory, and put them here in the open for you to grab and easily use in your game. Even if some parts of the article don’t suit you, you can always use the backstory for some other monster, just use the modified stat block I give you or use it as inspiration for something else.

This is actually a monster I took a big time in creating as I used it for my home game, so it has a special place in my heart. Vakrom is a green dragon with metallic pieces that traveled between planes, so pretty much a planewalking cyborg dragon. Cool, huh? Particularly, this one inhabits the Feywild. Why is it that this dragon became such a weird creature in this fantastic location? Let’s find out!

Previously part of the Council of Dragons, a group of intelligent dragons that governed and terrorized an entire region, looking to be left alone, Vakrom found the hate of the rest of the group. He did it by finding a great friendship in a captured dragonborn named Kargus. With his incredible cunning and manipulative schemes, Vakrom managed to free Kargus from prison and find him a home in a near forest. In there, Vakrom could hide his dragonborn friend with illusions and keep visiting him.

Years passed and the friendship between Vakrom and Kargus did nothing but grow. The dragonborn had a great deal of knowledge in the artifice and created his own workshop in the forest. Vakrom was later confronted by the rest of the council, who didn’t believe his lies when asked what happened with the prisoner. The green dragon was scratched, bitten and had part of his face incinerated on his escape, but he managed to make it to the forest, where he could lay low and hide. There, Kargus patched his wings and broken torso with metal pieces, and created half of a metallic mask, as well as a robotic eye to put over his burned side of the face.

Yaregosz, a blue dragon from the Council who had an ongoing rivalry with Vakrom was the one who found out his hideout and went to give him chase. Breaking the illusions by dispelling the magic, Yaregosz entered the forest and annihilated Kargus the dragonborn. Vakrom, in an act of fear, grabbed from his treasure hoard a horn of capturingÂ and trapped the blue dragon inside it in an extradimensional space.

In his escape from the Council, Vakrom used an entrance to the Feywild he knew about in the forest and disappeared into it. Vakrom would never set foot again in that world, not until he had built a big enough army to confront the entire council.

The Feywild is geographically similar to the Material Plane with some alterations. Knowing that, Vakrom went to the tallest mountain that has an entire forest on its top and laid there, making it his lair. With time, the lair started to change due to his presence combined with the magic from the Fey realm, granting the dragon some wild new abilities and opening portals to different worlds. The mountain has several portals that connect both to strategic sections from his lair and to other worlds, making them excellent to battle tactically.

Just like it gave weird new abilities to Vakrom, the Fey magic caused the whole area around the mountain to be filled with the green dragon’s mist, which has all creatures that cast a spell roll a d20. On a 20, roll on the wild magic surge table from the PHB. Additionally, all creatures with an intelligence of 6 or lower are forced to obey the green dragon’s will while in the mist, allowing Vakrom to see through their eyes. 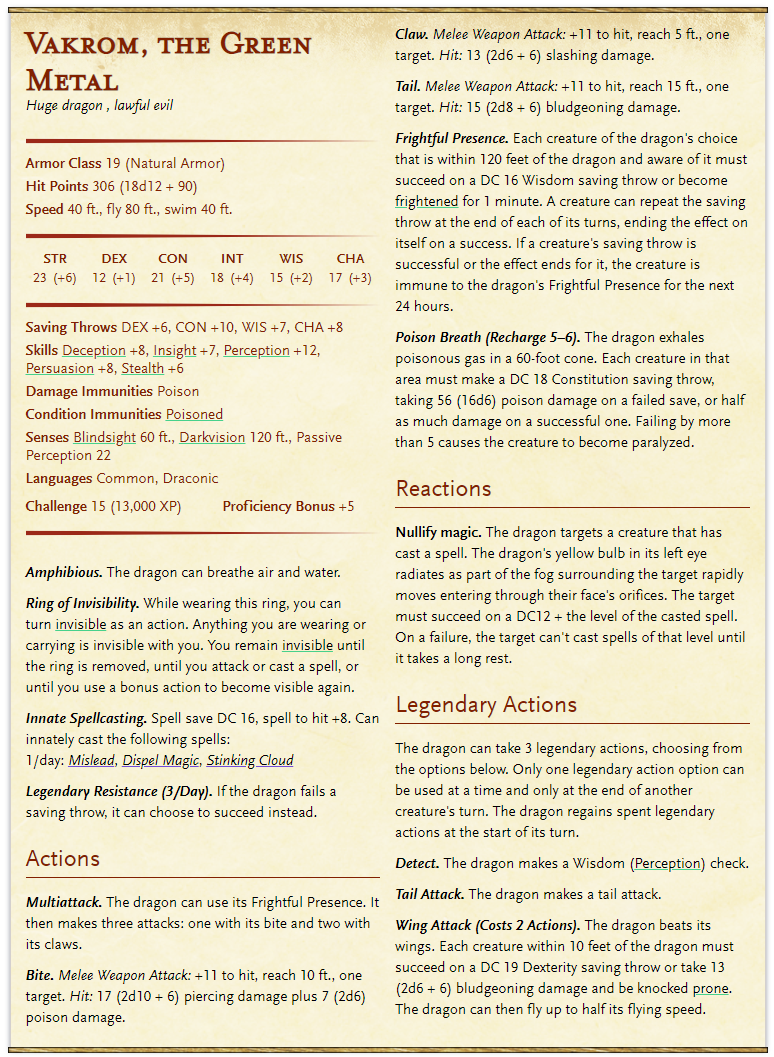 Vakrom has always been a patient and cowardly creature that prefers to manipulate other monsters into doing his dirty work rather than going full into combat. If his enemies get close to him, he will try to convince the other party into allying with him to take over someone else of higher power or that he is scared of in exchange of a great deal, if not all of the treasures they have. If he thinks there is something to be won by killing the player party off, he will contact the enemies they plan to battle against so Vakrom can cooperate with them to kill the party off.

If Vakrom sees a great opportunity to kill the PCs in his lair though, he will use his mislead spell to trick the PCs into talking with him while he finds an advantageous position and breathes poison or a stinking cloud from behind. His ring of invisibility is great to get into a better position or to escape if needed.

Despite his eternal fear of being beaten, Vakrom doesn’t find many things to live for after Kargus’ death. If he sees no chance of success, he will attempt to take the PCs life with him by destroying part of the mountain over them or by grabbing a player character and diving from the mountain to its base.

Vakrom has all sorts of treasures in his hoard he collected throughout the centuries. However, there are some specific things within his loot that are particularly special to him:

Did you enjoy this format? Are you looking forward to more NPCs and/or enemies that can inspire you or you can easily plug and play in your games? What did you make of this monster I gave you? Be sure to let me know in the comments below! I love to hear your stories.