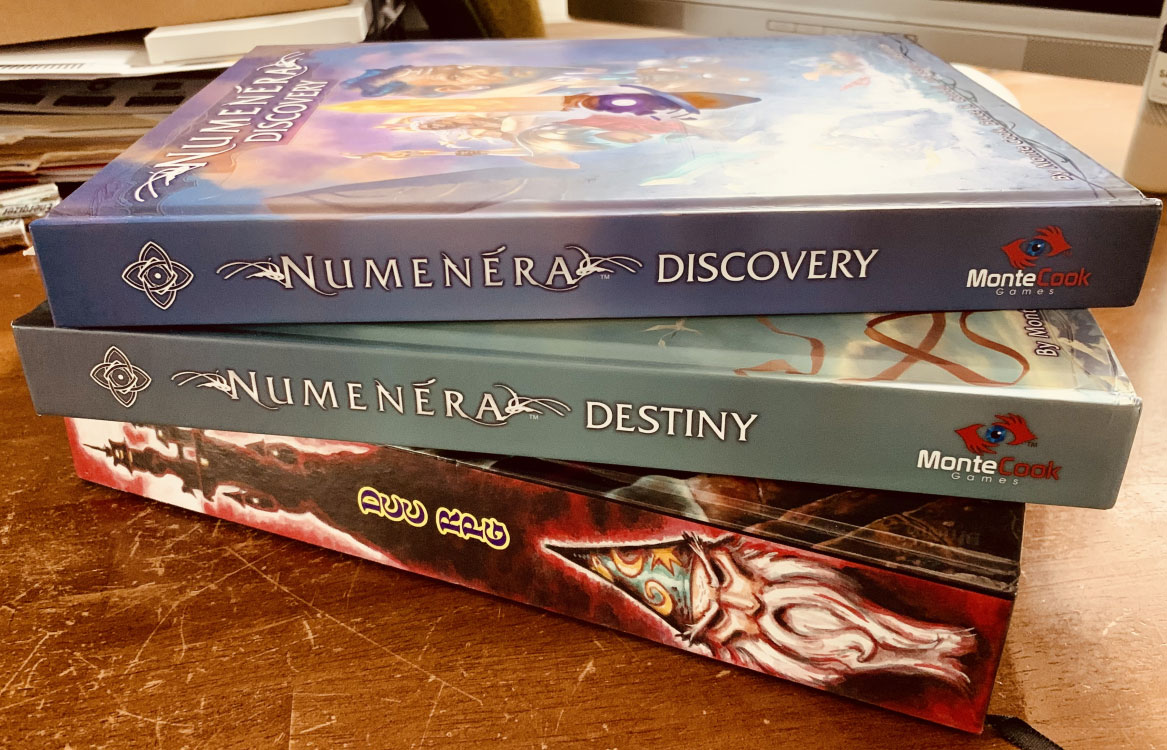 I have always been interested in different types of RPGs ever since I learned about Top Secret after buying my 1e Player’s Handbook. Over the years, I have played all kinds of RPGs. In the last decade, I have been heavily into Indie games, over more traditional RPGs. Lately, I looked at the games I am currently running and noticed that none of them are Indie games but rather more traditional games. Most recently, I started running Numenera by Monte Cook Games and realized it’s been a while since I ran a traditional game. This article is about some of my observations as well as some advice about venturing back into traditional games.

What are Indie and Traditional Games

Honestly, the definitions are not great on this, so I am going to do a mediocre job with it but hoping that it’s something we can work with for the article.

These are games that typically have more pass-fail mechanics, a strong GM role, and puts most of the narrative agency in the hands of the GM. They are also often published in the 8.5”x11” format, with multiple columns, or what I call Big Book games. These games are often done in product lines, where there is a core book and various supplements. In the past these were published by larger publishing companies, but this part of the definition is not as strong as it used to be.

These are games that often have less binary resolutions (partial success, fail forward, etc.), the GM role or narrative agency can be more distributed among the GM (if there is one) and the players. They are often published in 6”x9” format, with a single column, or what I call Little Book games. In many cases, not always, these books are single works, without product lines. Many of these books are published by smaller publishers, sometimes single-person companies.Â

Trust me when I say I can make an exception for either of these categories, but I hope that you get where I am coming from.

What Did I Learn?

So having spent years backing on Kickstarter, buying, running, and playing Indie games, coming back to playing a traditional game was a bit of a culture shock. I noticed some differences that took a bit of getting used to.

The first thing that struck me when I got my copy of Numenera: Discovery was the book is so damn big! It’s 8.5×11 and over 400 pages. Its a tome! Sitting on the couch I could feel the difference from my small book games in my hands. It’s not that big of a deal while I am home, since I don’t need to travel with any of these books, but I am imagining having to toss these into my Synik 25 and hauling them to my next game.

Advice – I like having the core books of the game I am running in a physical format, but I also get them in PDF (btw, I am a big supporter of Bits and Mortar). If you don’t want to lug around big books, go digital.

When your game is in Big Book size it means that it’s going to be two-column (or if you are Pelgrane Press, three-column format) with sidebars. For a printed book this is really not an issue, but if you decide to go with PDF, then depending on your device size (I use a 9.5” iPad) you are going to be doing some zooming and scrolling on the page, as you go from one column to the next.

Small book games tend to be single column and their PDFs read well on most tablets, and even on some phones, for you young ones with good eyes.

The worst for the tablet is the three-column layout, which I think is a brazen attack on digital formats. (Yes. I am looking at you Pelgrane).

Advice Â – There is not much you can do about changing the format. Again, reading the physical book is not bad, but if you are doing it digitally, your best bet is to scroll and pan. Or if the company offers something like ebook format, go with that, since it’s much more scalable.Â

There Are So Many Of Them

I forgot about game lines and supplements. Traditional games are loaded with supplements. Having decided to run Numenera, years after its release, there are tons of supplements for the game.

On one hand, it is awesome that there is so much material to supplement the game – books on different locations, different types of technology, items, monsters, etc. You will never be at a loss for material for the game.

On the other hand, it is even more stuff to read. If the giant rule book was not enough, there are hundreds of pages of supplements you could read and add to your game. These will also take time to read, and depending on your free time, it could be hard to get all the supplements you want to read.

Advice – Start small. Core Book + 1 is a great general rule for starting a game. Use the material in the core book plus one supplement. This limits what you have to read. It will also help to limit the scope of the game. Then over time, if you keep playing the game, you can read additional books and incorporate them into the game.

When I was reading Numenera, what struck me was how much information was in the book that I was not going to directly need, but was more of a reference. There were pages of character advancements, a full gazetteer to the known world, a creatures section, cyphers and artifacts, etc. Interspersed in those sections where the rules to the game and the GMing advice (which for Numenera, the advice is wickedly useful and good).Â

Â Quickly I began to discern which chapters needed me to read them in full and which ones could be referenced, that I could skim now, and use when I needed them.Â

Quickly I began to discern which chapters needed me to read them in full and which ones could be referenced, that I could skim now, and use when I needed them.

Advice – Take time to discern those different types of chapters; ones that are critical to running the game and ones that are more reference. Then adjust your reading. For the critical ones (i.e. core mechanics, combat, etc.) read those in-depth, for the reference material (lists of items, locations, creatures) skim these; make yourself familiar with them but don’t spend the time reading them in-depth.Â

The Scope of the Game Is Huge

Indie games tend to have a narrow focus and are not made to do all sorts of different activities. Many indie games have very small settings as well. Traditional games tend to be more expansive. They try to support different types of activities and have large settings in which to set your game. This means that traditional games often have more rules and information in order to be this broad.Â

It also means that for traditional games you need to nail down what kind of game you are running, during Session Zero, in order to understand which of the supported play styles and locations you will be using your game. Are you a caravan traveling the Steadfast looking for adventure, or are you living in a town in the Beyond supporting the town and helping to thrive?

Advice – In the session zero of the game, or even when you are first deciding what game to play, work on defining a more narrow range of what your game is going to be about and where it will be located. This is going to help you in knowing which parts of the core rules you can skim vs reading in-depth, as well as which supplements you may want.

Mechanics I Am Missing

In the switch back to playing traditional games, I have found myself feeling the lack of certain types of mechanics that are often more prevalent in Indie games. I have some preferences when I run games, such as partial success, success with a complication, etc. I like the ability to fail something forward when it makes the game more interesting, and am less enamored with binary (pass/fail) resolutions. I also like player-initiated complications. And if your game lacks one or more of these, you are more than allowed to house rule your game to make it work the way you want.Â

For me, in Numenera, I am taking some liberties in framing rolls, defining what Pass and Fail means rather than just if you do it or not. For example, if the players are trying to turn on a force shield before some automatons reach them, you can do that as pass/fail; do they turn it on or not. Or you can frame it as, can they turn it on safely or not, with pass meaning it turns on and there are no consequences and a failure meaning that it turns on but has some consequence (damage, tears a hole in reality, is going to overload in 4 turns, etc.).Â

I am also going to start allowing my players to suggest GM intrusions, to complicate scenes so that they can get XP, in a way similar to Fate’s self-compel.Â

Advice – I am one to try to play a game as close to the rules as written as possible, but it’s your game, and if you want to house rule in some Indie mechanics, work it out with your players and put them in.Â

What Is Old Is New

The thing about traditional games is that they are big. Big books, lots of pages, lots of supplements. Honestly, more than most of us are going to use, and more so if you are going to jump from this game to something else in a few months. But if you focus the scope of what you are playing and take note of what is core material vs. reference, you can narrow down what you need to read and run, making the game more manageable. And if you are homesick for some of those indie rules, you can always house rule them in.