I recently received the new version of Primetime Adventures after backing its kickstarter. It’s an excellent game, with a great deal of useful, clarifying text in the new edition. I’ve played it (and written about it) before, but the new third edition does a good job of adjusting the emphasis to clarify some previously confusing elements. 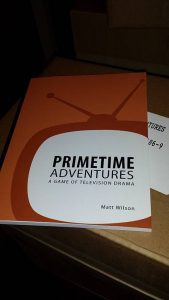 A few weeks ago, I excitedly wrote about Primetime Adventures on my local indie-roleplaying group and got a lot of enthusiastic interest. In fact, the interest proved great enough that I wound up splitting the group and committing to produce two new shows.

So far we’ve pitched the new shows, and got in one round of scenes with the first group. I learned a bit from the first session, which proved quite useful for the second show’s pitch session.

A Quick Precis of Primetime Adventures

Primetime Adventures is a game where you come together to create a show that you wish was on TV. You develop a cast of characters and select a few to be the stars of your show. After series and character generation, you have a show that’s ready to run for a season of 5 or 9 episodes. (Each episode is one roleplaying session of play.)

The game uses the language of TV to guide expectations; it’s exciting to discuss the big picture and know that your character is going to be critical to the developing situation. In many ways creating the TV show’s world is just a conversation–it’s not structured with points to spend like Microscope, Universalis, or Dawn of Worlds–it’s more like collaborating on a Kingdom.

While skilled groups have pitched, created characters, and played an episode of PTA in a con slot, I’ve always been slower. (That’s probably in part due to playing with people who are new to PTA–it’s important to get everyone excited about the specific show we’re creating. Letting experienced players alone drive series creation would be terrible for the overall series.) Though after this, who knows… I’ll have a broad pool of PTA veterans in a few months.

Friday evening I got together with five players. I’ve played with each of the players in various groups, but I had never played in a game with more than two of them at a time. I came in with a vague hope to create a pitch and run a pilot episode in three or four hours. That was wildly optimistic; we played for a little less than three hours and (mostly) finished the pitch and went through one round of scenes to demonstrate the system.

The first thing you discuss are the types of shows that interest you. We all demonstrated excellent listening skills, so it took a while for us to settle on a show idea. (There was a lot of “sounds good” and “anything’s fine”; while that flexibility is nice, it doesn’t help you nail down a show quickly.) We began tightening things up by identifying genres that we wanted to avoid; since most of the players get their fantasy fix in other games, we decided to do something different for this one. We settled on retro-science fiction–a setting that feels like it was written in the 50s, with holstered ray guns and no computer keyboards in sight. A space-pioneers feel, with explorers isolated and cut off from civilization.

After brief setting clarifications, we discussed an appropriate cast for the show. Developing a full cast was something we did more successfully this time, guided by the new rules text. Instead of moving directly to character generation, the players and producer instead identify the characters expected in that type of show. A cop show might have various police officer types, snitches, the DA, criminals, etc. For our show, we each spent a few minutes jotting characters down, then reading them aloud to form a common list. (I didn’t write large so everyone could see, which proved to be a drawback.) 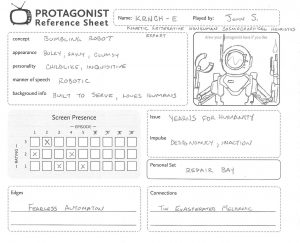 Once everyone shares their cast list, players select a character that interests them from the common pool. John led the way by picking a robot, KRNCH-E, that he described as immensely strong, a bit clumsy, usually with the wrong set of hands attached.

At this point, I passed out the protagonist reference sheets and we filled them in. Some elements were easy–just writing down what we’d already discussed–but other elements were trickier.

Characters have edges and connections, which line up most with traditional character sheets. Edges are a lot like Risus traits–they’re a broad bundle of skills, aptitudes, and interests like Ninja or Parent. KRNCH-E is a fearless automaton–a strong robot that doesn’t fear death–he can always be repaired. Connections are NPCs that the characters are linked to. There’s good advice about making sure that you pick connections who are going to provoke your issue. KRNCH-E selected his mechanic, which should be perfect–who would be more likely to see him as always a robot first, a bunch of parts to be repaired and swapped out?

One of the trickiest elements was reworked in the current edition and proved easier to present. The character’s issue was expanded into an Issue and an Impulse. The issue is the dominant recurring problem for your character: are you resisting a hair trigger temper? Addiction? It’s analogous to a character’s Trouble in Fate Core: an element that routinely complicates the character’s life, engaging viewers. (Who wants to watch perfect people?) For KRNCH-E, he’s not human… though he yearns for it. The great new language in the book adds an impulse–how your issue typically manifests. So characters with an “Angry” issue might shout, but they might get coldly formal and polite, or seethe and snap sarcastic witticisms instead. You could have three “angry” characters who would still feel different when they gave in to their impulses.

Characters also have a personal set, where the character goes to be introspective and recharge their batteries. (It literally recharges your character in PTA; you get to reuse an edge or connection after it’s recharged by a scene in your personal set.) It’s often a character’s bedroom or other alone space; KRNCH-E hangs out in the repair bay, while Coburn hangs out in the weapon locker, cleaning the contacts of Princess, his blaster rifle.

The last character element feels tricky and is 100% interactive. You map out each character’s screen presence for the season. Screen presence measures how much you’re the center of attention–a reminder to move the spotlight, tied to game mechanics. You coordinate with the other players to weave sketched storylines together; deciding which characters are prominent and which are background in each other’s spotlight episodes. In the picture you can see that KRNCH-E seizes the spotlight (has a spotlight of 3) in the second episode. We decided to set it early, since his issue doesn’t rely on exploring the planet or other characters’ spotlights to set it up.

I rushed a bit, trying to hook the players with a concrete example of setting scenes. It was a bit rushed; we didn’t really sketch out the first scene collaboratively. It worked, but it was flatter than it could have been after prep. The game in play, though is a tale for another time. Instead, let’s look at the second pitch session.

The Tuesday group has been playing together for years–it’s the same group that recently played Pathfinder, the Pathfinder Card Game, and D&D 5th edition. It’s a group of friends, comfortable with each other, playing in a home.

Over the weekend, we found the large dry erase board. I was eager to put it to good use.

We settled in and started the same way; kicking around ideas and seeing what would fit. Patrick had seen the process on Friday and explained how things worked as we threw out pitches. We stalled after a few minutes and turned to the new random card mechanic from the new edition for inspiration. We kicked around a lot of variations on the topic: sex, but wound up working together small town, police/agent, business, and honor together to come up with a weird Night Vale inspired small town. Peculiar, Missouri, is a real small town, but we’re mostly just borrowing its name. 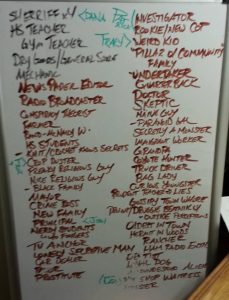 I erased the white board and had everyone quickly write down characters who made sense for the show. We then went around the table and each player read out their cast while I copied it down on the whiteboard. By the time we’d all contributed, we had a huge list. I propped the cast list up on a chair while everyone decided which character to take on as theirs for the season. Most of the characters merged two cast members for their character; for example, Jennifer’s Isabella is a waitress (with quite a talent for baking pies), who flies a crop-duster on the weekend.

Learning from the rushed play on Friday, we spent a little longer finalizing the characters (adding a second edge or connection, discussing personal sets and their game effects, etc.) After the Friday session, I had read the book again [it’s short] to make sure that I hadn’t missed anything. Pages 50 and 66 have really good information about launching the series, particularly collaborating on the beginning and creating a good teaser scene. Kicking the scene around, we developed a compelling start. I get to start the pitch section next time mostly reading the scene we built together–we’re starting with a bang. I’ll also introduce the episode’s threat in that scene… I wonder if they’ll notice the confounding elements right away. I’m looking forward to throwing our fleshed out scene as a strong platform to start from next time.

If you’ve played Primetime Adventures, please tell us about your series. Did you find trouble spots or have any awesome scenes? Whether you’ve played or not, if anything above has you curious, ask and I’ll try to expand on it.

Hopefully the game and series descriptions above (or at least the process) sounds interesting to you. I’m looking forward to tearing into these meaty series over the next few weeks.