Pacing Yourself GMing at Cons

I have a bad habit of overloading myself at conventions, and I know I’m far from the only one. There’s just so many games and so little time and I want to do it all. In particular, I tend to load my schedule with GMing. I can’t help it; I see the event registration open up and I say “okay I’ll run three games! Well, maybe four. And one more can’t hurt. Oh and there’s nothing being run in this slot, so I’ll add another.”

At Queen City Conquest in 2017, I ended up running games in every slot, all seven slots of the weekend. And what’s more, I ran seven different games. No repeated systems or adventures. And I’ll be honest, I had a ton of fun at that con and I thought all my games went well… but by the end of it, I felt like my brain was leaking out of my ears. I went home and fell asleep at 5 pm and slept for something like 14 straight hours. 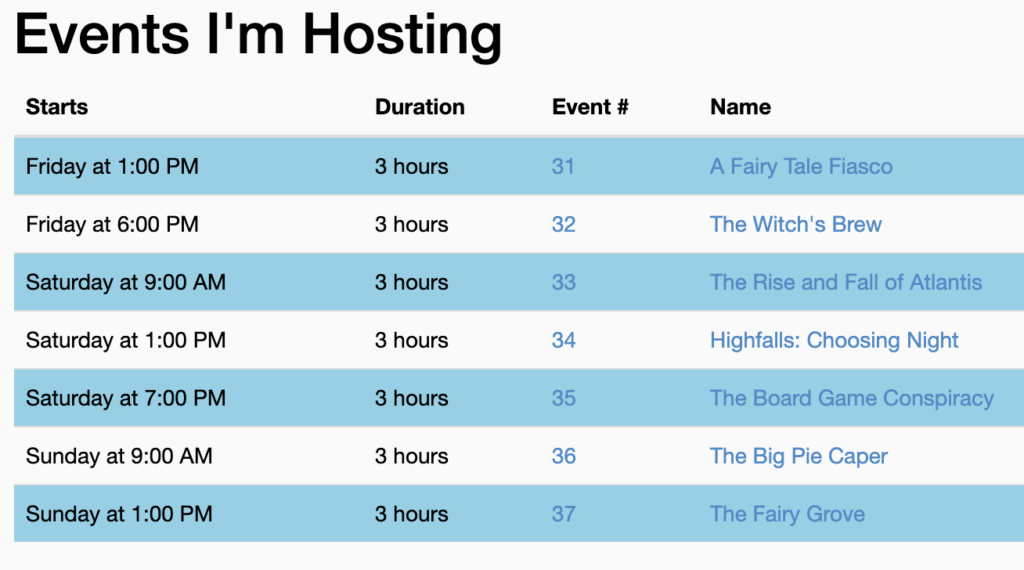 Why did I do this to myself?

And I know I’m not the only person who does this. Far from it, in fact. So I’m here to tell you why you shouldn’t completely overload yourself with running games at cons… and then I’m going to tell you how to make it easier on yourself if you go ahead and do it anyway, as I continue to do myself.

I also found that by running every time slot, I was missing out on some of the social element of cons. Conventions are often the only place that I see friends who live far away, no matter how much we interact online. I’ve made lots of new friends at cons just by being available to spend time with people, something I can’t do if I literally can’t be dragged away from the gaming table. Just having quality time to see people face to face is something I really treasure at cons, and so I had to start running fewer games to make sure I had that time. Game time is one thing, free social time is another.

This last bit I’m going to tell you didn’t really sink in for me until this year’s Queen City Conquest, when I ran one of the worst con games of my career as a GM. See, the reason I ran all those different systems is because I think of cons as my time to play the different games that I don’t necessarily get to play during the rest of the year. If I can’t normally find people interested in a certain system, I’m much more likely to be able to at a convention. But here’s the kicker: when you overload yourself with games, you’re much more likely to run them poorly.

I ran one of the worst con games of my career as a GM.

Because I was so focused on preparing two of my other games, I completely underprepared for another one. I thought that because I had run it before (albeit, not in a long time) I would be fine. Instead I went in with a half-baked concept, I was scatterbrained, I had forgotten the rules of the system, and the game ended way earlier than I intended it to. Luckily I had wonderful players, and that wasn’t everyone’s first introduction to that system, but I keep thinking about “what if it had been?” If that game had been my first introduction to that system, I don’t know that I ever would’ve sought it out again. I used to think that by bringing lesser played games to cons, by exposing new people to them, that I was doing everyone a service. But you’re not doing anyone a favor if you under-prepare for a game you love, least of all yourself.

So with all that out of the way… I’m still going to run more games at cons than there are days of the con. No matter what, I like to be busy and I’d rather be over-scheduled than under. But I’ve learned some methods to make it easier on myself, and to make it so I don’t end up with brainmelt again. 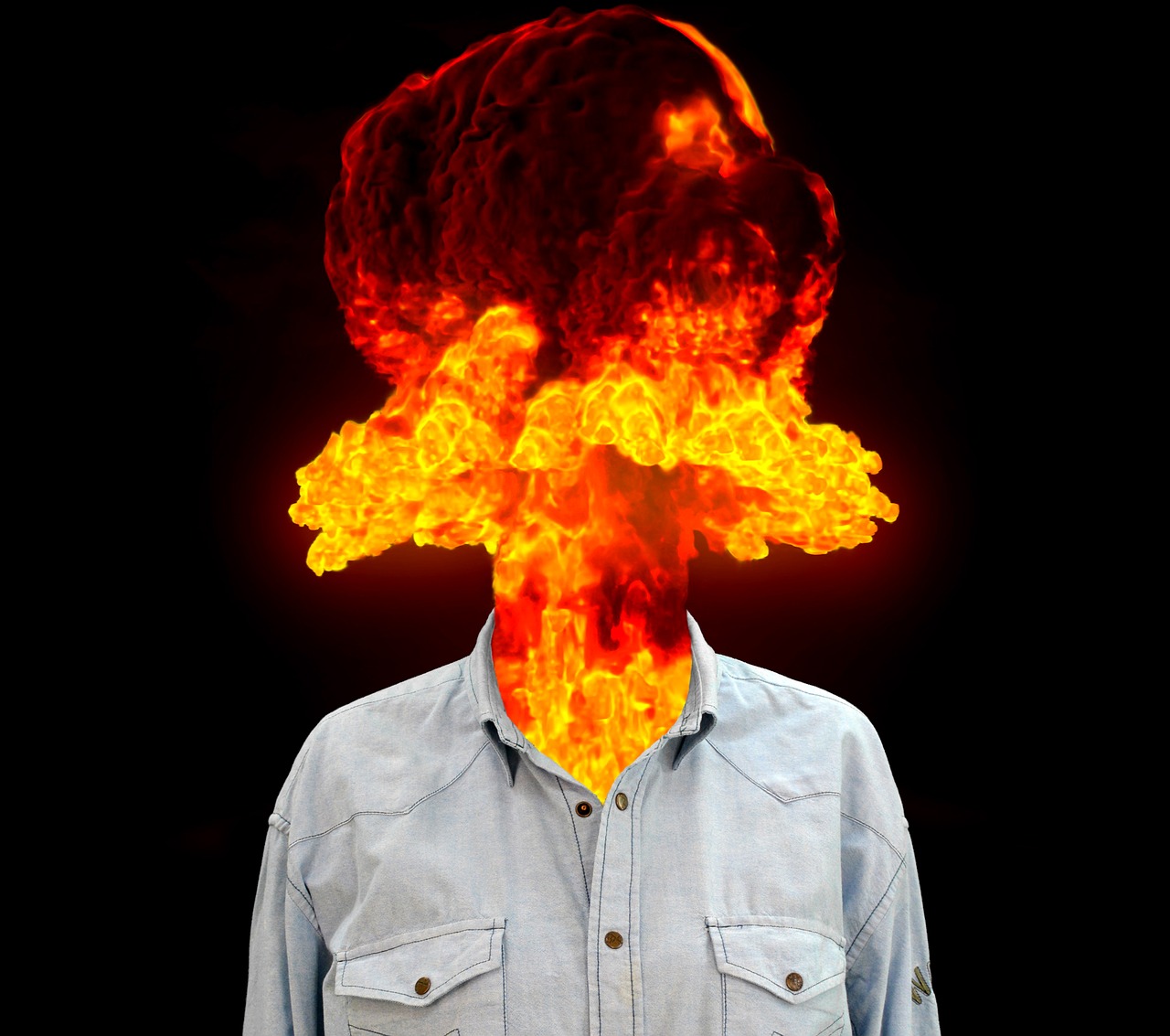 When brainmelt goes too far…

First up, I like to make at least one or two of my games a GM-less game or a no-prep game or both (most GM-less games are kind of no-prep to begin with). That inherently reduces the amount of work you need to do before the con even starts. It also means that the mental load of “running” the game is shared between you and all the other players. You will still need to be more a facilitator than the others, but that’s still a lesser load than running the whole thing. There’s a reason some people have taken to calling them “GM-full” games instead of “GM-less”.

Â …importantly, it gives you a second shot at running the game well.Â
Second, I’ve started repeating games. If I’m going to run five games at a con, I used to run five unique games. Nowadays, I might run three unique games, repeating two of them. This has a couple of benefits – it reduces your preparation needs, right off the bat. It gives other people with busy schedules a second opportunity to get in on a game they might be really into (how many times have I heard “oh I would love to play this, but it overlaps with the other thing I signed up for that day!”). And importantly, it gives you a second shot at running the game well. I’m not saying you should treat the first one as a trial run (you shouldn’t), but running it a second time gives you a chance to fix issues you noticed the first time.

Third – and this is probably really obvious to everyone who isn’t me – I’ve begun to recognize the importance of taking a break or two during the game session itself. I used to try to avoid taking breaks during the game, in a misguided effort to cram as much gaming as possible into a short amount of time. But all that was doing was burning me out faster. Turns out, it’s easier to run games all weekend if I’m not letting myself get dehydrated and hungry (and inevitably, hangry). And it’s better for your players, too. Taking a couple of 10 minute bio breaks wasn’t cutting into my gaming time; it was making me more able to focus on my gaming time because I wasn’t thinking “oh my god I would kill for a snack” every three minutes.

A lot of games even have built-in break points where stepping away from the table is natural and not disruptive. In a game where character creation is done together at the table (like most Powered by the Apocalypse games, for example), after character creation but before jumping into play is a natural time to stop and take a break. Other games may even have act breaks as part of their story structure. How many pre-written adventures and modules have you seen that break up their text into smaller objectives? Those are great pause points.

So those are my tactics – while I don’t ever intend to stop filling my schedule at cons, I have cut back some, and found ways to make it so I don’t break my brain in the process. What are your methods to keep con fatigue at bay? How do you prepare for marathon con weekends of GMing?