Ever since Troy’s article about running red box D&D for his kids at the end of January, I’ve been immersing myself in the OSR (Old School Renaissance). It’s been a ton of fun, and one aspect in particular has been some of the most fun I’ve had as a GM in years.

Even though I started gaming with the Mentzer red box, I never fully experienced old school play in the most classical sense (a group of treasure hunters/tomb robbers go on dungeon crawls to amass treasure and glory). That could have been because it was 1989, because I only played solo (one GM, one player) back then, because of my first GMs’ personalities, or because of any number of any other factors. 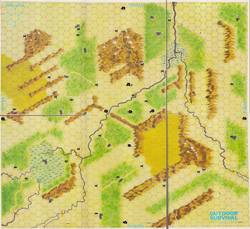 One aspect I missed out on — to the point that I wasn’t even aware it existed — was the hexcrawl (or hex crawl, if you prefer): the original sandbox. In brief (as I understand it), a hexcrawl is a game where the GM designs a portion of the world, maps it out hex by hex, populates it with things for the PCs to do and places to do them, drops the PCs somewhere in the middle, and asks her players “What do you want to do now?” The story is what the PCs make it — no over-arching narrative, no GMing agenda to preserve, and no need to fudge rolls or pull punches.

Coming off of a story focused, tightly scripted Star Trek campaign where the whole group prioritized making it feel like the show, the hexcrawl concept hit me like a combination ton of bricks/breath of fresh air. I’ve never gamed this way on either side of the screen, but goddamn do I want to try it out.

So in my vanishingly miniscule spare time, I’ve been creating my own hexcrawl. It’s incredibly liberating. I can see a few opportunities in 2012 for running adventures in this setting, but I’m not committed to anything — I’m prepping this because I want to, not because I have to. Prep not being my most favorite thing, that’s rare for me!

Along the way, I’ve found a host of resources that have educated, enlightened, and inspired me, made hard things easier, and generally been totally awesome. Here are the best of them.

Embrace Randomness and Just Have Fun

Welsh Piper’s hexcrawl guide
I’ve been following this method pretty closely, and I absolutely love it. It’s the perfect combination of serendipity and enforced randomness, and letting the dice fall where they may has taken my initial ~15,000-square-mile region in directions I never would have thought of or chosen in a vacuum. My favorite aspect is building things on the atlas level, then the regional level, then the local level — and templates for Hexographer (see below) are provided for those options. (The link is to part one; there’s also a part two.)

The free version of Hexographer
Hexographer is a great example of a gamer-designed tool that works beautifully, and of gamers giving back to the community. The free version differs from the reasonably priced paid version primarily in that it only works online via their website — you can do everything you need to map your hexcrawl in the free version. It’s one of the most user-friendly utilities I’ve ever had the pleasure of using, and it’s made starting and discarding early versions of my world very easy. (You can read Kurt’s Hexographer review right here on the Stew.)

Bat in the Attic’s insanely detailed hexcrawl system
I say “insanely” not as an insult, but because this system goes into incredible detail. The beauty of it is that it remains eminently readable and inspiring even though I don’t have time to follow it exactly. Just reading the whole series has made me a better GM.

Quick Primer for Old School Gaming
I’ve found myself going back to this little free book and its concepts many times over the past six weeks, and it’s been tremendously useful to me. If, like me, you’ve never sampled this play style, it turns a lot of assumptions you may have about gaming on their heads. It’s had a profound impact on how I think about gaming as a whole, and on my assumptions about the “right” way to do things. It’s not hexcrawl-specific, but man is it useful. (Oddly, this book has been reviewed not once, but twice here on the Stew: Matt’s review was generally positive, while Patrick’s was generally negative. Put me in the glowingly positive camp, obviously.)

RPGnet: Lazily GMing a sandbox campaign
I read a lot of threads about sandbox gaming, and this was one of the most useful. It got me thinking.

Old School Encounters Reference (PDF)
This free PDF is a comprehensive reference for creating dungeon and wilderness encounters using tables. It’s the most comprehensive I’ve seen, and like most OSR stuff it’s broadly compatible with everything from the original edition up through AD&D 2e, Castle and Crusades, and all of the retro-clones.

Fantasy Name Generator
This is the best name generator I’ve ever used, hands-down, and it’s completely free. Not only does it offer the zero-effort “Push button, get names” approach you’d expect, but it offers a programmable option as well. Programmable how, you say? You can specify the number of syllables, fix certain elements (you know you want a name that starts with “Fel-” but not how you want it to end), tell it how many vowels and consonants to use, and more. It took me 15 minutes to learn the language and start using it. Seriously: This thing is amazing.

700 monster lair descriptions (PDF)
So when Frog God Games produced the Tome of Horrors Complete, a D&D monster book with over 700 critters in it, they published a Swords & Wizardry version (S&W being the retro-clone of OD&D) and a Pathfinder version. PF has long stat blocks, so they filled the gaps left behind with descriptions of every monster’s lair in the S&W version — and then compiled them all in a free PDF so PF players (and you) wouldn’t miss out.

I’d be remiss if I didn’t mention that GROGNARDIA, Tenkar’s Tavern, Bat in the Attic, and Jeff’s Gameblog have become daily reads for me over these past few weeks. I already read Jeff’s blog, but irregularly; the others were new to me. They’re all fantastic.

In the end, I’m kind of scratching the tip of the iceberg here. I haven’t even touched on all of the great non-hexcrawl-specific products (particularly adventures) I’ve read lately, or the games you can use in place of the more expensive originals should you not have or want to track them down. Like all the best pages on Wikipedia, this one about retro-clones is a great starting point, and a rabbit hole that leads many places. I can’t possibly be comprehensive in this one article, and I’m not pretending to know as much about this stuff as many, many other folks do.

If this is all largely new to you, as it is to me, I hope you fall as hard for it as I have.