Old or New, A Convention Question 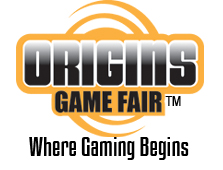 Today I get in a car and start driving towards Columbus, Ohio with a couple of good friends and all the supplies I need to survive five days of gaming awesomeness that is Origins Game Fair. Heck, by the time I woke up today, there were already early nerds a couple hours into the first games of the convention. It should be no surprise to anyone who’s read this blog for a while that I LOVE conventions. The chance to cram as much gaming as possible into several days while also hanging out with awesome people is one of the things I love most in this life. There’s no question that I’ll be attending the con, but it is always a bit of a struggle trying to figure out exactly what I’m going to do while I’m there.

The schedule for Origins 2014 had thousands of events listed this year which is a lot to parse through, even if I narrow it down to the RPGs I prefer to play. While I don’t dislike other types of games, I get the most enjoyment out of RPGs. Shrinking the list down to just the RPGs available during the hours I know I’ll be awake (i.e. post 11am since I am NOT a morning person) trimmed it down to ‘only’ 700 choices. Faced with that, I had to decide whether I wanted to play something familiar, either a system I already know or a GM I’ve played with before, or play something completely new. 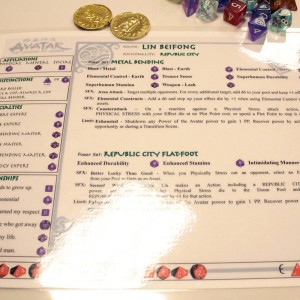 I got to play Lin F’in Beifong!

For some folks, getting to a convention like Origins is all about playing as many familiar games as much as possible. There are plenty of organizations and companies that offer an abundance of games throughout all four days of the convention to feed into this desire. Whether you’re talking about old school adventuring parties with the Pathfinder Society, or putting a rigger through multiple Shadowrun Missions, or even losing as much sanity as possible through Rogue Cthulhu’s many horror offerings, people who like these particular games are usually well served. These players know what they like and take the opportunity to get as much of it as they can.

While that type of single minded dedication isn’t for me, I get why people do it. For some gamers, it is very difficult to find a solid, reliable game group, let alone one that likes to play the exact same games they like to play. Very often putting together a game group is an exercise in compromise. For the person that really, REALLY likes Shadowrun but can’t get their regular group to play it, the chance to megadose on it at a convention is too good to pass up. Of course, there are also people who are simply uninterested in trying something new and feel more comfortable sticking with what they already know they enjoy. If that happens to mean all Cthulhu, all the time, then so be it.

At the opposite end of the spectrum others hit the convention floor with the intention of trying as many new games as possible. If it’s something they’ve already played, they’ll pass and keep searching for the shiny and new games that are just debuting or they’d never had a chance to play. While I’ve met very few people that are die hard ‘only new’ players, I have met some that play familiar games reluctantly and if they’re the only option for that time period. For these players, cons are an ideal place to try out new games and often a place where they can beta test games that could become the next big thing. 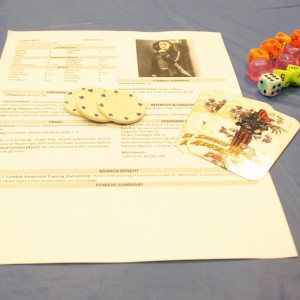 I’m one of the many players that fall somewhere in the middle. I enjoy getting to try new games at cons, especially ones I’ve heard buzz about but never had a chance to play. I also like the opportunity to play old, familiar games I don’t get to play that often. I also have a handful of GMs that I really enjoy but only get to play with at conventions. I often make their games a priority.

This year I’m looking forward to trying out Cold Steel Wardens, Little Fears, and Baker Street, all games I’ve never played before. I had a chance to talk with the creator of Cold Steel Warriors last year, but the chance to try out the game fell through. Both Little Fears and Baker Street will be completely new to me. At the other end of my schedule, I’m playing an Apocalypse World game that had an interesting write-up for the scenario. It’ll be nice to see how another GM handles the system and add some of those tips and tricks to my own GM tool kit. I’m also going to be playing a couple of Cortex+ games with a GM whose games I really like. See, a mix of old and new.

How do you plan your events at cons? Do you fall in the middle like me, or are you one of the two extremes?

2 Responses to Old or New, A Convention Question