Like pretty much everyone, I have a smartphone. On that smartphone are a lot of apps, including game apps. I also have a pretty long commute on the LIRR, which is notorious for breakdowns during peak commuting hours, and thus I have trained myself to sleep on the train to take some of the pain out of the situation. Before I fall asleep, I usually put in a few minutes on one of my various mobile games; the combination of drowsiness and gaming lead me to some odd conclusions.

The Temple Run Games are Actually Set in Hell

(or At Least Purgatory)

Think about this for a second. In Temple Run, you’re constantly running with no end in sight. You’re being chased by your demons, and if you stumble they catch up to you. The architecture of the place is impossible—you can take four right turns in mere milliseconds, but never wind up running back where you just came from. Also, the cast of characters is just . . . odd. In the first game you have tomb raiders, a Spanish conquistador, an Asian woman with a very fancy wardrobe, and a football player. What brings this sort of eclectic group of people together? 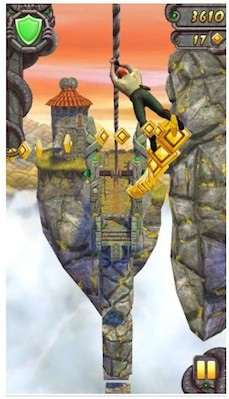 “WHERE THE [BLEEP] IS THE GROUND?!”
Image from “Temple Run 2” by IMANGI STUDIOS

Add to that the fact that Temple Run 2 seems to take place somewhere in the middle of the sky, and I think we could safely say that Virgil would be an appropriate unlockable runner. Whatever your character did in life that is represented by taking the golden idol, it has earned you an eternity of physical exhaustion punctuated only by your horrible death, and then a repeat of the whole process. Forever.

Those Birds are Genocidal—and TERRIBLE Parents!

I’m not sure at what point I began feeling like I was doing something wrong when I was mass-murdering porcine creatures using ill-tempered fowl, but once I did it got me thinking. The Angry Birds consider themselves failures if they don’t kill every last pig they see. It doesn’t matter how many of them die in the process. They’re basically feathery suicide bombers!

Now, let’s look at the REASON they’re killing off Pigs by the bushel: the Pigs are kidnapping their unborn children. “Isn’t that enough of a reason to want to murder every pig they see?” you say. Well, normally I’d agree with you; you could consider these games the animal kingdom’s version of the Taken [1] films. However, consider what Liam Neeson said when asked if there would be a third Taken movie: “I don’t think there’ll be a Taken 3. She can’t get taken again. That’s just bad parenting.” [2]

That’s the crux of my problem with the Angry Birds! They’re the worst damn parents in the universe! By now they know the Pigs are always after their eggs. Why wouldn’t they set up around-the-clock nest-watching patrols, or build a fortress out of some of the random building materials that are lying around, or—at the very least!—move in next door to some bacon fanatics?!

And if they’re really intent on killing all the pigs, why not a preemptive strike?! They have that Mighty Eagle O’ Doom, after all.

I’m Surprised Om Nom Is Still Allowed to Have Candy

Om Nom
from “Cut the Rope” by ZeptoLab

No deep thoughts here, but considering that Cookie Monster now proclaims “Cookies are a sometimes food,” [3] I’m amazed that Om Nom is allowed to devour as much of the sweet stuff as he is. I’m surprised that there aren’t some hyper-vigilant politically-correct folks putting forth all sorts of petitions to have the piece of candy changed to a Brussels sprout or something.

These are the sorts of bizarre thoughts that pop into my head when I’m stuck with my phone and my exhaustion and my long commute. . . .