“O” is For Old School: Review of The Dungeon Alphabet

Get your bull’s-eye lantern, a 10 ft pole, and some spikes, because we are taking a journey into the dungeons of yesteryear. For those of you who did not battle theÂ  Slavers, wander the Borderlands, defeat the Giants, and stood in the Demonweb Pits, you are in luck. Goodman Games provides you an old school Sherpa, in the way of The Dungeon Alphabet.

Disclaimer–Goodman games was kind enough to provide a PDF copy of The Dungeon Alphabet.

What Do You Get? 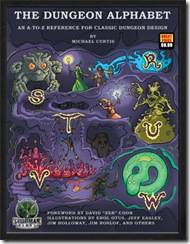 The Dungeon Alphabet is a sourcebook written by Michael Curtis, with a forward by David “Zeb” Cook, and cover by the old school master, the great Erol Otus. The interior artwork is excellent, and I recognized the work of several other favorites within the book. Including both Jim Holloway and Jeff Easley. The artwork ranges in size from page borders to full page illustrations.

As you might have guessed, the book is arranged by letter, and contains a single entry for each letter. The entry starts with a description of the element and its use in the dungeon. Each element is accompanied by a random table for a GM to roll up an example element. Each entry also contains a black & white illustration highlighting the element.

The book is only 48 pages in length; making it a quick read. Do not take its lack of pages as any sign of weakness, these are a potent and fun 48 pages to enjoy.

Elements Of The Old School

There has been a trend over the years to make more logically constructed dungeons, with ecologies, and reasons and functions for every little thing. Not a bad trend in the least, and one that I have followed, during my D&D 3.0 renaissance. There is a place for logically created dungeons. This book is a detour from all that logic, and is a guide to the more Gygaxian dungeons, where surface logic breaks down, as you delve deeper into the dungeon and the laws of the deep take power.

The elements that were selected for the book range from the obvious: H is for Hallways, D for Doors; to the more exotic: O is for Oozes, Y is for Yellow, and F is for Fungi. In each case, the element is given an old school treatment, with mundane items such as a Jewel with unusual clarity to the more exotic such as a pool that is magically “sharp” whose liquid cuts any who steps into it. The examples for the Lever entry alone will make any party pause with trepidation the next time they see a lone lever in a wall.

In all the elements selected, their descriptions and the items in the random tables provide an informative and exciting tour of the wonders of the dungeon. They are great reminders why Hallways should not all be 10 ft wide, and why one should fear the color Yellow when it appears.

Not Just for Grognards

While the book has a distinct old school feel, it is as useful for a Swords & Sorcery game as it would be for a 4th Edition Dungeons & Dragons game. The book does not have any system-specific mechanics, though it does feel as if it was written for OD&D or any of its retro-clones. The information listed could easily be adapted to any of the D&D systems, as well as any other fantasy rule system (Rolemaster, Savage Worlds, True20).

There is some reference to relative power level in the book, but it is done using Dungeon Level, based on a 10 level megadungeon. In this scale, the first level is for inexperienced adventures (read: 1st level) and increasing in power as you move up the scale and deeper into the dungeon levels. The scale is useful, as it gives the GM an idea of where a given element is most appropriately found and what kind of party should discover it.

Ultimately though, the GM reading the book will need to inject some mechanics into some of the entries, be it a DC for a skill check, damage for a trap, or the stats of a group of Kobolds. Expect a little work when you transfer these elements into your game.

Besides being system neutral, the book is useful in the the hands of a new or inexperienced GM. For the inexperienced GM, the book is a great resource providing an explanation of the elements that make up the mysteries of a dungeon. It also forms a great primer of the elements of an old school dungeon, which have been the inspiration for most of the current modern game designers, giving the newbie GM some appreciation for our hobby’s roots.

For the veteran GM this book is a great reference and will give your imagination some new fuel. With every letter, your mind will be a buzz with ideas. Your biggest problem will be not to put all these elements into a single dungeon.

Why You Want This

Often in our haste to map the floor plan of a dungeon, stocking it with creatures and treasure, we at times forget to create the subtle sense of mystery that comes from the exotic location of the dungeon. We forget the small details that not only give the dungeon character, but create a sense of insecurity within the players that makes them poke at the ground with their 10ft pole or to keep looking over their shoulders in fear.

The Dungeon Alphabet is a great resource for such details in its random tables, which will allow you to quickly grab an element and use it to spruce up your dungeon. Where this book really shines is that in its descriptions of each element it is an inspiration for creating your own elements.Â  In this way the book serves a dual purpose, doubling its value.

The Dungeon Alphabet can be ordered from Goodman Games, and is now available in PDF from DriveThruRPG.com.

2 Responses to “O” is For Old School: Review of The Dungeon Alphabet