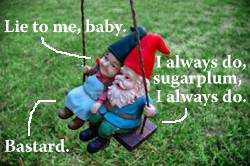 There are lots of ways to use NPCs to motivate your players to take a particular course of action (by motivating their PCs, of course), but I’ve recently discovered one that surprised me: lying.

Specifically, having an NPC that they would like to trust — or perhaps have trusted in the past — turn out to be a filthy, lowdown liar.

This is along the same lines as stealing the PCs’ stuff (which is easy to overdo), killing their allies (great, but not to be overused), slandering them in the game world (effective, but not suitable for every situation), but I love it because it’s so versatile. You don’t need much in the way of setup, and it works in nearly any situation — though you should still be wary of overuse, as with any technique for player motivation.

Having a formerly trusted NPC turnout to be a lying bastard will also tend to inculcate a certain amount of paranoia about other NPCs, which is only logical. If you’re not running the kind of game where rampant paranoia is a positive thing, you’ll want to be extra careful about that.

Also, depending on the specific lie(s) and the specific context, it’s likely that revealing the lie(s) will change the direction of your game. Hopefully it’ll change in the way you intend, motivating your players to avoid or hew to a specific course, but there are no guarantees.

Even with all those caveats, though, I’m happy to have found this new-to-me tool. It’s fun to use, it works well and most importantly it seems to be fun for my players, as well.