Here are three themed NPCs for use in your game. Though they could be tweaked for any genre, they can be dropped directly into a supers or modern fantastic game. Their theme is flawed divine power. Often, divine heroes are portrayed as beautiful and righteous. Not so with these characters. Though still heroic, they are a motley and damaged group. 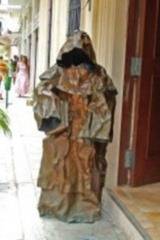 Brother Job:
When the nuns of St. Mary’s found an abandoned infant on their doorstep they took the poor thing in, intending to keep him warm and fed until he could be turned over to the authorities. When they uncovered the baby and discovered his scaly skin, vestigial tail and twisted legs they realized this poor boy’s life would be a trial like no other. Naming him Job, they secreted him away in their abbey instead of informing the outside world, raising him as one of their own and keeping him away from prying eyes. Young Job was a handful, dashing, jumping and climbing with his deformed legs like no normal boy, squirming into every nook and cranny and disassembling and haphazardly reassembling everything he could get his tiny clawed hands on. Though he studied and prayed and was thankful for the sisters’ care, Job often slipped away from the abbey, rooting through garbage cans for junk, skulking about after lone passers-by and inadvertently creating the legend of the chupacabra of 12th street. Against the sister’s wishes, Job left the abbey as a young man, eking out an existence on the fringes of society as a repairman and concealing his body beneath hoodies, coveralls and other heavy clothes. When a local junkyardÂ -Â withÂ a reputation for being hauntedÂ -Â couldn’t keep a watchman, Job jumped at the opportunity for an endless pile of parts, certain that he would be protected from any dangers. Indeed he was, because the “haunt” turned out to be a fellow hero. With the resources to build a gadgeteer’s hoard, his unique biology, the prayers and divine protection taught him by the sisters, and now a companion, Job saw it as his duty to help those who, ironically, had not had the good fortune afforded the deformed abandoned baby he had once been. Within his team, Job has taken the role of leader and councilor, encouraging and supporting his less well adjusted teammates. Tactically he acts as a scout and ranged support both with prayers and with his gadgets. 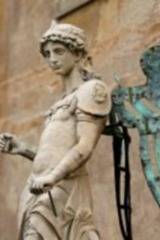 Virtue:
The “haunt” that scared away all Job’s predecessors at the junkyard, Virtue appears to be an angel. When Job found her she was nearly comatose,Â  badly burned, missing an arm, a wing and most of her other wing. Though she was in a sorry state, her unnatural vigor helped her recover quickly and well, though stopping short of regrowing her missing limbs. Despite her quick physical recovery, she still has difficulty communicating, having limited ability with human speech, though she sometimes speaks in sudden bouts of some unidentified language. In addition, she often seems distracted or mesmerized by something unseen by others and can be seized by a fearsome melancholy during which she cannot be roused sometimes for days. Job was happy to let her wander about the junkyard while she recovered, and was amazed by her prodigious strength, but more surprising was the fact that objects that she touch or even remain in her presence for too long tend to come to life, most often wandering off until their borrowed virility fades. Seeing her idly playing with some scrap iron one day, Job was struck with a vision and crafted her a set of metal replacement limbs. Though crude, she wields them skillfully with her animating powers. Despite her difficulty communicating and her fits of depression, Virtue is easily roused to accompany Job on his excursions, animating hordes of objects and is a fierce physical combatant. 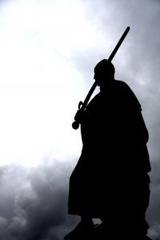 Vox:
The problem with antiques is that sometimes they’re possessed by vengeful ghosts or baleful demons. If only Miguel had been so lucky. The reliquary he found in a dusty back corner of his uncle’s pawn shop while helping out with inventory contained some sort of incredibly persistent and well-intentioned spirit. It was not, however, a politically correct spirit. Instead, from the moment Miguel became possessed, he has been the mouthpiece for an endless stream of vile offensive diatribes. The spirit has opinions on almost everything, and they are always the worst possible opinions. Not only does it have horrible things to say about big issues, but it has opinions about all the little things too. Miguel spent almost two years wearing a gag all day every day, and though most of his family and close friends were sympathetic about what they assumed was a sudden onset of the worst case of Tourette’s* in history, even those relations were terribly strained (and he was not invited to family dinners). The worst revelation came when a group of toughs singled out Miguel because of his gag and reputation for offensive opinions. As the thugs smacked him around, one of them pulled off his gag. Miguel wasn’t surprised by the incredibly nasty bile that started spewing from his mouth, but the glowing sword and armor of light that shone out of him was something new. With some experimentation, Miguel found that he could only use his beneficial powers without his gag on, and that when he became worked up, his awful voice could even serve as a weapon – stunning people and even slamming into things with physical force. Miguel was forced to choose between hiding his shameful secret and using his seemingly divine powers for good. It only took a short time before word spread of the incredibly offensive holy crusader, and he was hunted down and recruited by Job who promised to do the best he could to help the unlikely hero with his curse. Vox Is a highly defensive front line fighter and his sword of light doesn’t deal lethal damage. In addition his verbal assaults can stun, shove, taunt, and perform other tactical functions.

*Stew Reader Brian Bentley provided me with a link to a fact sheet on Tourette syndrome.

6 Responses to NPC Trio: Three Divine Misfits For Your Game