My nine month hiatus from Gnome Stew was spent designing my own role playing game rules and setting using the Fudge system.Â  Over the next few months I will be taking that material and publishing it to one of my sites with the intent of opening the project up to the public.Â  This personal project taught me two wonderful lessons:

1)Â  I like designing RPGs, but I have no interest in publishing one.Â  Go figure.

2)Â  RPGs are best when designed to address the social aspects of this hobby.

If you have never taken a serious crack at designing your own RPG I encourage you to do so.Â  You will only go slightly insane, and eventually the voices will go quiet.Â  Designing your own RPG will also focus you to think about what has made some games pure awesome and other games crap on a stick according to your own personal experiences.

Reading through various materials on RPG, or any type of game design, I never found a quality explanation that I agreed with completely as to what a good RPG design should focus upon.Â  There were some very interesting theories, and a lot of poorly strung together clumps of pseudoscience.Â  Yet none really satisfied my ideas as to what is needed to make an RPG great.

I am not an award winning RPG designer.Â  Heck, I have never even had one of my game designs published!Â  But I am a damn good GM and as such I design with a GM’s needs in mind. This must be taken into account as you consider the advice that I will eventually present to you.Â  At the moment though I am enjoying the feel of my old felt hat and my +2 quill of vorpal blogging that only active gnomes may wield.

What is that makes an RPG session enjoyable?Â  There are a lot of people who will tell you that balanced rules are at the core of a good RPG, but I have played unbalanced games that were amazing fun with the right group of people (Rifts anyone?).Â  Other people will tell you that a good RPG addresses a particular type of player or element of gameplay.Â  This cannot be correct in my opinion,Â  because I have played great games with many different types of players at the table with many different game elements being used in gameplay (Top Secret /S.I., Fudge, etc.).

The more I thought about it the deeper into lunacy that I delved.Â  I passed C’thulu near the intersection of Werewolf: The Apocalypse 1st Edition’s page XX and AD&D 3.5’s rules for grappling.Â  He says hi.

Finally it occurred to me that the best games that I have ever played in always had a strong element of collaboration amongst the participants at the table coupled with a deep sense of immersion.Â  Those games where you as the GM are answering questions and hearing crazy ideas from every player at the table are the ones that I am talking about.Â  Those sessions where the players fell right into a devious trap but then cunningly found a way out of it as a group and then wiped actual sweat from their brows.Â  Those nights where you feel like you have been playing for a couple of hours only to realize that you are a couple of hours late getting home because you were just so focused on the game.

Finally my own personal theory of RPG design and good GMing emerged: the theory of collaborative immersion.Â  Ready for it?Â  It totally blew C’thulu’s mind, so tell me what you think of it:

“More enjoyable RPG sessions are the result of rules and participant play styles (both the GM’s and the player’s) that allow for the group to collaborate on an immersive event.”

That’s it.Â  That is what I believe is the secret to a great game.Â  In fact, I have even gone so far as to create this wonderful magic quadrant diagram to help explain this concept better. 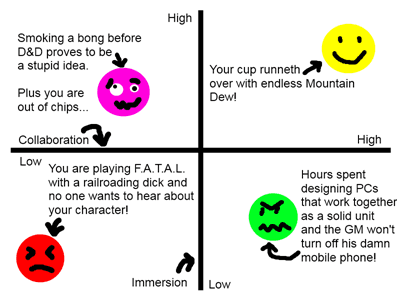 Why is collaboration important to a good RPG game?Â  Collaboration is the act of people coming together to accomplish something.Â  Even competitors such as the two teams in a sporting event collaborate at various levels in order to compete.Â  Rules are agreed upon, a venue is chosen, and a certain level of sportsmanship is expected to maintain the honor of the event.Â  Communication and cooperation are the tools of collaboration

Immersion on the other hand is the secret spice of RPGs.Â  We would all be playing chess if the point of an RPG was merely strategy.Â  RPGs have another level to them that the rules barely touch upon, and it is more of a trait than a design feature.Â  This trait is the shared narrative where we as players, even the GM, are allowed to be someone or something else within the confines of the game.Â  We are not merely playing a role that is scripted for us, but we are instead fully in charge of another being of imagination.

Is your game allowing for these two elements to flourish?Â  Are you talking with your players and encouraging them to talk with each other about how your group will work together to produce a great game?Â  Good communication is essential to any group effort.Â  Are the rules that you are using inhibiting or promoting collaboration?Â  Confusing rules lead to arguments, while clear and concise rules move the game forward.

Take this theory and challenge it, or defend it if you believe there is merit to it.Â  Post your own theories here for others to comment upon, and provide examples of RPGs that support your ideas.

As for myself, I am psyched to be collaborating with my fellow bloggers once more.Â  And what gnome does not like being immersed into a good stew?

17 Responses to My Theory for RPG Design & Good GMing