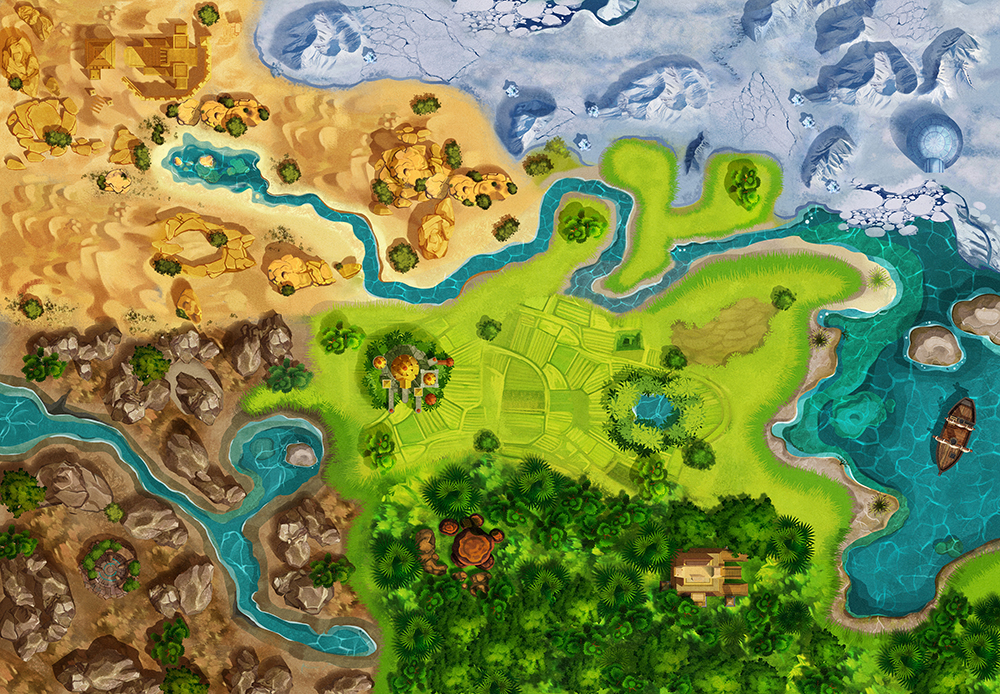 The whole map to explore…

My experience with hex crawls is limited, despite gaming for many years. Of course, I know the general concept, and most ‘traditional’ fantasy games have a degree of traversing the wilderness, but in most the focus was on getting from point a to b rather than actual exploration. Despite this lack of experience, I shocked myself by deciding that my Depths of Xen’drik campaign was going to be a pseudo hex crawl.

In early 2022, I decided the next game I was going to run for my regular group was going to be a D&D 5e Eberron campaign. I batted around a few ideas, but eventually settled on the PCs competing to partake in an expedition to Xen’drik. It’s an area of the setting I haven’t been able to play or run very much and thought it could be fun. For those not familiar with Eberron, Xen’drik is a bit of a lost continent. In ancient times it was the seat of a powerful giant empire that was destroyed by a magical cataclysm that fractured the continent. It’s a place of wild magic, dangerous ruins, and many mysteries to explore and discover.

The early stage of this campaign was built around the competition to be chosen to accompany the expedition to Xen’drik. Consider it ‘Sharn’s Next Top Adventurer’ or whatever reality competition comparison you want to make. This turned out to be a great way to start off the campaign as it let each of the players introduce their character on their own terms, while steadily bonding together as they interacted with the NPCs and the challenges. Once the challenge was over, they boarded a ship to sail across the sea and… well… I realized I needed to figure out how I was going to handle them wandering off into the jungle to just explore.

I have never been a railroad GM and adapt pretty well to what my players do, but I also rarely do sandbox style games, so I usually have an idea of what plot they’re involved in at the time and where they’re going next. This helps with prep quite a bit. But doing a game where they can pretty much go where they want and do what they want? For a few moments, I considered just creating a bunch of encounters and slotting them in whenever it felt appropriate, but that felt a little bit like cheating. This game was going to call for a hex crawl plan.

While my experience with hex crawls is limited, I do get the general concept. I started doing some research and looking at the way other games handle this type of thing. I had played through the first part of Pathfinder’s Kingmaker adventure path, so had a little bit of understanding from that. I also looked at Forbidden Lands and how it breaks down the exploration phases of the game. I still wanted to keep this loose to fit my GMing style, but wanted enough structure to help both me and the players engage with the game.

The first thing I did was write up some exploration rules.

The next thing I had to take care of was populating the map. Eberron is an established setting, but the continent of Xen’drik is quite large with very large areas for GMs to put in whatever they want. The official maps of the continent are gorgeous, but don’t provide too much for me to hang the exploration on, meaning it’s up to me to fill out the map and provide things for the players to explore and discover.

This has probably been the hardest part for me, because I tend to work a bit more loosely with planning out a campaign. I have an idea of where things are going to go, but I generally don’t flesh things out fully until I know the players are about to engage with a thing. I can’t really do that in this campaign. I have to populate the map with enough stuff to be able to legitimately let the players go where they want, but still be prepared to give them an interesting session. If I have some really cool stuff planned in the hex to the west and just loose ideas of the hex to the east and they go east, I’m in a bit of a pickle.

We’ve played multiple sessions in this exploration phase of the campaign and so far its going pretty well. I’m learning the balance of how much to prep without burning myself out, but still giving the players enough to explore. I still panic a bit when I have a bunch of cool stuff in one area and they talk about going in a different direction, but I’m also learning better ways to offer them clues about where stuff might be.

All in all, this has been a good experience, even if it’s not a style of GMing I’m used to. Do you have any stories of switching to a different style of campaign and how you handled it?

1 Response to My First Hex Crawl