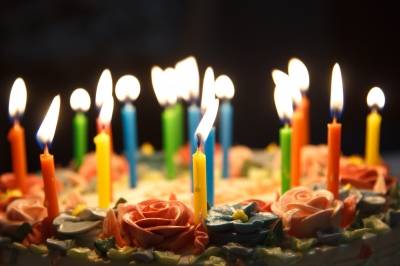 As a GM, you have a lot of characters with serious issues to explore–both yours and the players. Sometimes, though, it’s the small questions that reveal characterization–and reveal more about the world you’re building.

One of the most common celebrations in our world is birthdays. You can copy birthdays and bring them into your world, build a culture with a different birthday analog, or even use a culture that doesn’t care about your day of birth at all. There are many options. Let’s play with some of them!

If you want to sing along, we can continue when you finish.

Once you assign a birthday to a character, horoscopes become a useful tool. As a GM, you can use the associated astrological sign to assign traits for a fast NPC. For a prompt requiring interpretation, you can read the character’s horoscope and see what fortune and challenges await them. If the villain’s supposed to have a bad day, maybe that’s your cue to let the PCs catch up.

Prophecies can play into this as well; a child born on the ides of March might be destined to kill the emperor. If the emperor slaughters all of the children he can find that were born on that day, it’ll inspire the PC to keep it quiet… and give her a lifelong grudge to work out!

Depending on the era and culture, many people lacked access to a calendar, making it impossible to record an exact birthday. Even in cultures where recording birthdays was possible, birthdays weren’t always a big deal. The Romans began by celebrating the emperor’s birthday, often with public banquets, but over time this diffused down to the celebration of wealthy and influential citizens.

In Greece, name days were more commonly celebrated. You celebrate a name day on your patron saint’s sacred day, rather than on a day related to your own birth.

Baptismal days were the days officially recorded (in lieu of birthdays) and celebrated in early medieval Europe. In January 2014, Pope Francis suggested that everyone should look up their baptismal day, and celebrate it like a feast day. Particularly in less medically advanced cultures, this may have been a reaction to infant mortality–instead of celebrating each child’s birth, you celebrate the children who survive. (Medieval infant mortality of 30% is one estimate.)

You can use birthday celebrations to set your world apart–just by breaking expectation. If natal days aren’t celebrated, does anything take their place?

Some replacements for birthdays will emphasize different elements of your culture. Eliminating birthdays altogether encourages characters to define their lives by the feast days and celebrations of their culture. To create a bond with others, consider using saint’s or name days–sharing the bond of a common saint gets celebrated on-screen with a party. Or the PCs might use a name day celebration to get inside an NPCs’ house… and take the opportunity to check out the medicine cabinet.

For a futuristic take, maybe birthdays are divorced from years altogether. If various colonies are on planets with different orbital periods, someone who is a local 22 years old might be younger than a stranger from a planet that’s further from its sun who is only 14. An easy “adjustment” is to have everyone keep track of their time in earth-standard years… but, that really downplays the feeling of another world. How long would you celebrate a measuring system that doesn’t relate to your experienced life at all? A generation, two, or three?

A replacement for a year could involve celebrating birthdays every 10,000 hours. That would make the big birthdays still be the “tens”, but they’d be slightly skewed. For example, today you become a teenager at 13 years, or 113,880 hours. In an hours based system, 100,000 hours is the closest analog; you’d get there at 11 years and almost 5 months on Earth.

Of course, you can embrace the local star system, and have ages match the local sun. That’s particularly valuable for a colony that forgot its star faring past–or for people who have turned their back on the ancient past.

Depending on the setting, a birthday might be only one of the special days your character celebrates–or it might not even be known or noticed.

Have you done anything interesting with your characters’ birthdays, as a player or GM? Let us know in comments.