Gnome Stew’s second book, Masks: 1,000 Memorable NPCs for Any Roleplaying Game, will be available for preorder soon — but in the meantime, let’s do another preview!

Our first two free previews presented six fantasy villains and six sci-fi allies. The fantasy preview also included a wealth of general info about the book, and in a third piece we revealed the author of the foreword.

This time around, let’s take a gander at some of the modern NPCs in Masks: six modern neutrals. Like our previous samples, this one provides six NPCs you can start using in your game right away — no prep needed. 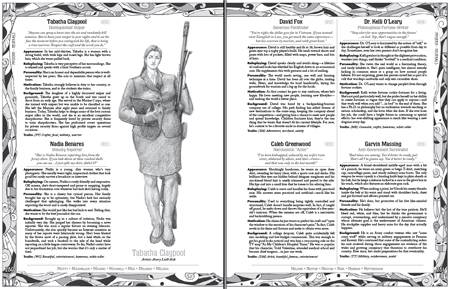 We’re nearly done with the book, so this two-page spread is post-proofreading. It features the artwork of Avery Liell-Kok, who did interior artwork in all three genres.

“Modern” isn’t really a genre so much as it is as catch-all for “games set from around a hundred years ago through the near future.” You don’t play a modern game, you play a Cold War spy campaign, a Special Forces campaign, or a campaign about crime-fighting high school students. As buckets go, it’s a pretty big bucket.

That’s not a bad thing in the context of Masks, though, because one of the features of the book is that you can use all 1,000 of its NPCs in any game. We cover this in greater detail in the GMing advice chapter of the book, but it boils down to this: When it comes to great characters, genre really isn’t that important. It matters, but not nearly as much as their personality, motivation, backstory, and the other elements of the Masks NPC template.

Masks is almost finished! That’s a pretty exciting status update for me after close to 10 months working on the book.

We have a few things left to do, namely: create the indexes, give the book a final preflight check (and fix anything that crops up), send it to the printer, and verify that the proof copy they send back looks good.

The finished product is going to weigh in at 336 pages, and will be in hardcover. We’re getting very close to being able to open up preorders — stay tuned!