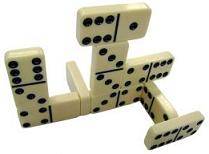 Some gamers like battles that involve battlemaps, minis and precise movement.

Other gamers prefer battles to be largely descriptive, with the GM keeping track of positions.

Many gamers fall somewhere in between — perhaps leaning towards a loose map of the combat area that isn’t used for hex-by-hex tactical movement.

So how do you balance those preferences at the gaming table?

By taking these four things into account, in this order of importance: system, necessity, your preference, your players’ preferences.

The first factor is the game itself. It’s tough to run D&D 3.x, for example, without a battlemap and minis or counters, although there are plenty of folks who’d argue differently. Other RPGs place much less emphasis on tactical details — generally, the lighter the rules system the less likely you are to need a detailed battlemap. So whether you follow the lead provided by your game of choice or buck the trend and run it differently, the system is still the first consideration.

The second consideration is necessity: Does the specific combat you’re about to run need a high level of detail, or will it benefit more from a lighter approach? If having a fun battle means you need to change up the way you normally handle things, then so be it — the outcome is the important part.

In third place is your personal preference. As the GM, you have more to do at the table than any individual player, and you have the benefit of knowing what you’re going for in any given battle — what kind of feel the combat will have, how it fits into the overall story, etc. This is one case where I would argue that your preferences as the GM are just plain more important than the preferences of your players.

Lastly, you should take your players’ tastes into account. If you like loose, sketchy combats and all of your players like crunchy, tactical combat, you’re probably running the wrong RPG. If your group has mixed preferences, try to strike a balance that gives everyone at the table at least some of what they want out of combat.

Do you agree with my take on these four factors, and with their order of importance? Oddly enough, the order they wound up in isn’t the order I expected when I started writing this post — but once I got rolling, it fell into place this way. Are there factors missing, or other considerations that should be taken into account?