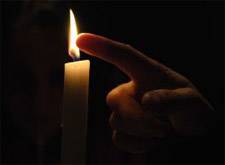 What kinds of hard choices have you created for the PCs in your own games?

18 Responses to Make Them Choose: Devil’s Choices for PCs