Mad Props and the Character Box

Do your players dig props? Do you want more props, but don’t want the expense (of both time and money)? Are you worried about what to do with the props? Do your players ever disagree as to exactly who had that potion? Here’s an inexpensive and effective idea that I’ve used.

Caveat: I borrowed this concept from the GM who brought me back into the RPG fold. Cool ideas like this drew me back in. The pics and execution are all mine.

Start with enough stackable storage boxes for each of the PCs and any base or large vehicle. Tupperware is great, but cheap disposable ones work fine, too. A good size is about 5” square, and 2” high. Use these for the character’s props, notes, backup character sheets, dice, minis, props, etc. An important aspect of the box is that anything in the box is on the character (or base or vehicle). There’s no confusion over who has what potion or scroll: If it’s not in your box, you don’t have it.

Note: In the pictures, the quarter is there for size comparison, as it is almost exactly one inch across. 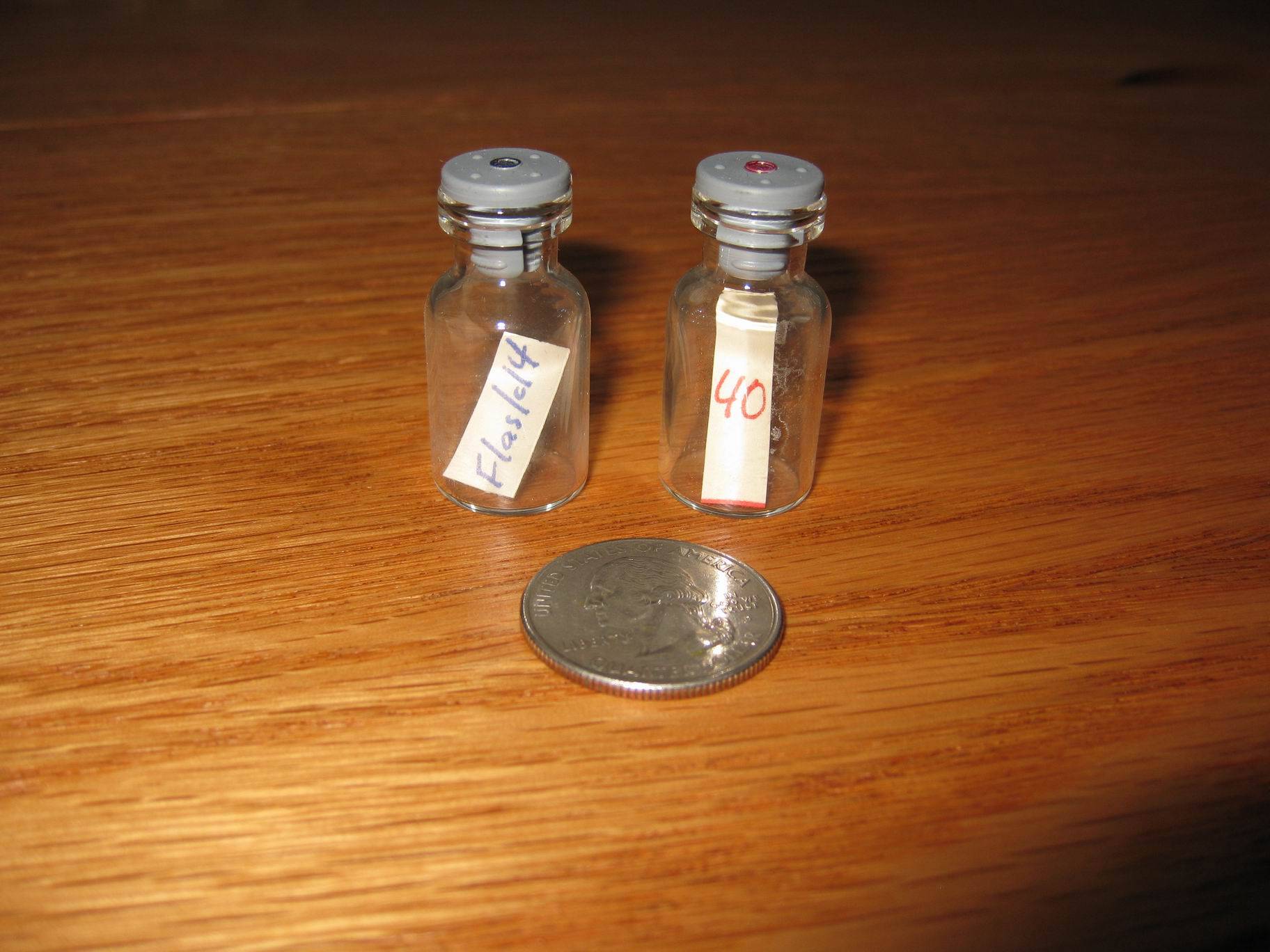 These potion vials were found on eBay as a “lot” of glass vials, about 2 ml in size (approx 2/3” x 1.25”), with rubber corks. Heavy paper was numbered and cut to fit. Blue ink signifies larger ‘flasks’ and red is for smaller ‘vials’; a colored dot on the top of the bottle also indicates which is which. The GM keeps a log of potions and flasks, and (hopefully) so do the players.

In game, the cryptically numbered vials recreate the uncertainty over which potion is which. When they’re used, the question of “Did I get that right?” lingers. When a random potion is stolen or broken, the GM can just grab one out of the box. Some groups really like this; others find it an endless source of (unfun) frustration.

They are glass; despite many of them being dropped onto a tile floor, only one has broken. I was ‘filling’ them, and must have rolled a natural 1 on the Craft (alchemy) die, because I stepped on it… 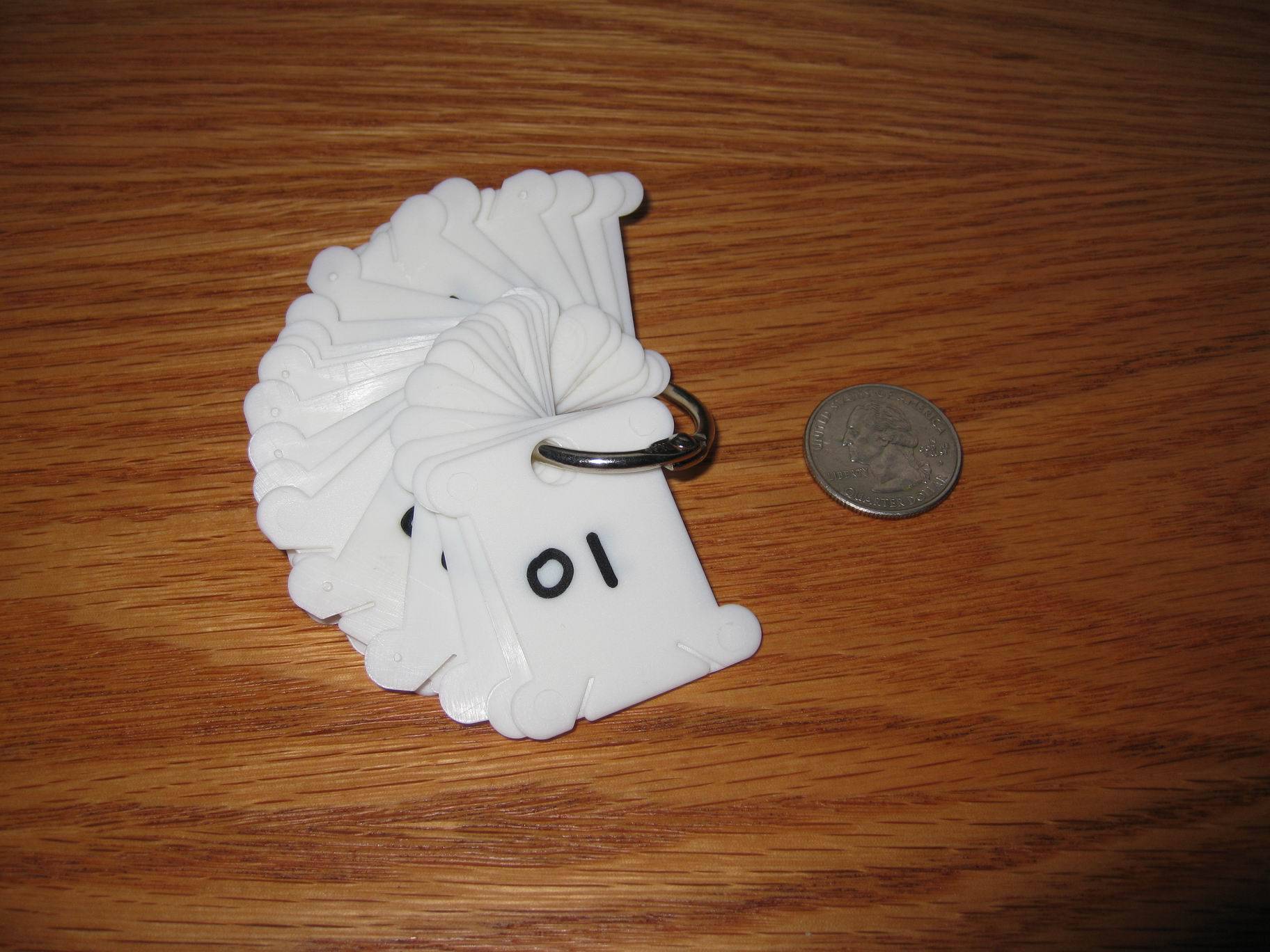 Flat plastic sewing bobbins represent scrolls, because they kinda-sorta look like scrolls if you squint and turn your head a bit. Different-color ink can designate “Arcane” and “Divine”, if you’re into that. I allow players to pencil in which spells are on which scroll, if they choose to. 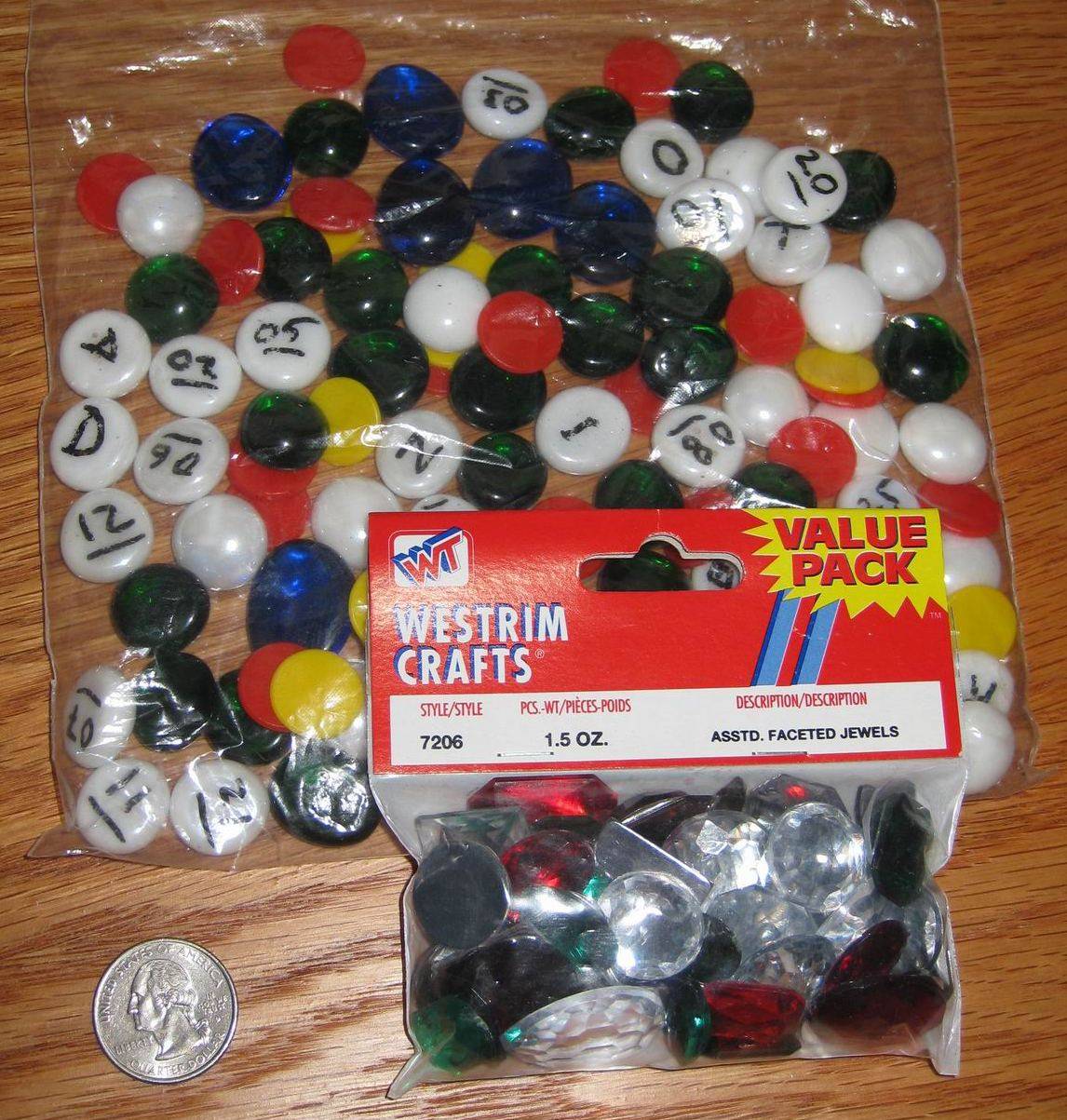 Gems make for great magic items. Break one for a potion; throw one for a grenade; mount one on a sword for an additional enchantment. They can be difficult to mark; glass marker eventually wears off, and the ‘stick-on’ gems have wax paper backing. Unmarked, gems and stones make excellent tokens for spell points, ammo, etc.

While not as tactile or visual, index cards are good for tracking special items. Hand the card over when something is found or purchased, and add to the description as necessary. Again, no confusion over who has that Sword of Ogre Decapitation, and Joe Player knows exactly what it does, because it’s all right there on the card.

Index cards give the player a place to keep notes, in case Brazen the Bronze wants to note where he found his armor, and what customization he’s had done to it.

There’s much more you can do for props, but these inexpensive options may add something to your game. Got any ideas of your own that you’d like to share? Sound off in the comments and let us know!

11 Responses to Mad Props and the Character Box