Long Campaigns, Story Arcs, and Being the Prairie Dog

When you’re running a longer campaign, there’s always a danger that the story arcs you had in mind at the outset won’t be the best option as you progress through the arc of the campaign itself.

This is often a good thing: Static, predetermined stories can be awesome, but they can also feel static and predetermined to your players — not so good.

Planning things out in broad strokes (or even in fairly specific strokes) early on is a great approach. It keeps you focused and on-task, and it helps to ensure that your campaign feels coherent and shows progression over time.

But if you don’t think about the plans after you’ve made them, they may become progressively less workable and enjoyable as the campaign marches on. 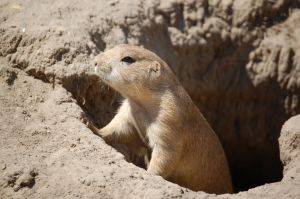 So what’s the solution?

Think of prairie dogs popping up out of their holes from time to time to check for danger and get the lay of the land: that’s what you need to do.

Step back from your campaign, try to pretend you’re not as close to it as you no doubt are after several weeks/months/years running it, and ask yourself one simple question:

Does this stuff still make sense and sound like fun?

Use whatever trick you need to in order to give yourself a fresh perspective on your plans, story arcs, campaign arc, and the game to date. Show your notes to a fellow GM, post in a forum, go someplace where you don’t normally do your reading and read things over again — whatever works for you.

Then, just consider all of the major upcoming elements of your campaign — even the ones that are already in motion — and give each one a couple of minutes of your time.

Will it work given where the game is now? How about based on what your players are most interested in at the moment? Does it sound like as much fun as it did when you first planned it out?

Take notes about your conclusions, and then apply them to your campaign going forward. That might mean keeping everything exactly as you planned, or it could mean ditching some things (carefully, and without disrupting your campaign) in favor of new story arcs and elements that better match where the campaign has actually gone.

That’s all there is to it — it doesn’t have to be a huge process, and it’s usually fun. Just remember: Be the prairie dog.

And if it helps you to make prairie dog noises while you do it, well, no one else has to know about that, do they?

4 Responses to Long Campaigns, Story Arcs, and Being the Prairie Dog