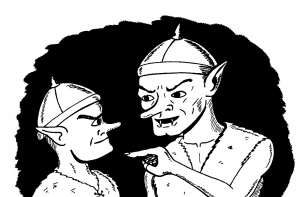 Can most of us run without prep time? Probably. Can we run well without prep time? Probably not. While prep time differs for different GM’s, we can’t eliminate it entirely. There are outlines to be prepared, maps to be drawn, statistics to be looked up, and so on. Sometimes we don’t have the time we’d like, and sometimes we don’t have the energy. So are there any silver linings in all of this? Here’s a few thoughts.

Limited prep time helps us refine our time management. For example, I always carry my notebook with me (or use Evernote on your phone if necessary). When I get “dead time” waiting for someone to finish a piano lesson or to get back to the car, I can jot down a few notes. Even a few minutes here and there goes a long way. (And don’t discount a paper notebook, they never need recharging.) Also, limited prep time helps us develop our project management skills. Most of us develop a general format to follow when preparing our notes. It might even spill over into other parts of our life. I’m planning my notes and handouts for a new course I’m teaching this fall. I was surprised to find myself using a session notes format when organizing this course.

If you are willing to spend just a little extra time and effort in your preparations, you can find another silver lining: using stuff more than once. I (almost) never prepare a new scenario if I am running a pick-up game. I either use something I have already run, or something that I am working on for my regular group. This way I get double duty out of my prep time. Also, you can often “reskin” your old notes even for your regular group. Change a few spells or special abilities, and you have an entirely different opponent. As you prepare your games, you might even want to make monster or NPC cards. After you have run a few sessions, you’ll have a stack of familiar foes for pick-up or convention games.

Lastly, prep time can be good for you. It’s a chance to forget about real world troubles and escape, even if only for a few minutes. It builds a little playtime into your day, which some experts think helps our mental and emotional health. And if anyone sneers at you spending time on your “goblin game” just remember that Tolkien said the only people who don’t want you to escape are jailers.

How about you? How do you fit more prep time into your days? How do you make the most out of your existing game scenarios? Does prep time make you a more relaxed person or help you in any way in your real life? Let us know below.

I guess my first inclination is to question your basic premise. I’ve been GMing at cons for 22 years now, and my experience is that the amount of prep I do has very little relationship to the quality of the game. The sweet spot for me might be a couple lines of notes and a good general sense of what the game world and PCs are like.

After Chris Bickford showed me you could run highly entertaining Amber games with no prep at all, I experimented with that for a number of years with great success. More recently I took it a step further and ran a couple of games without any prior knowledge of characters or setting. (I told the players to hash out what setting they would like but not tell me prior to the game.) IMO the last of these went as well as my last few games I did prep for. Probably better, really.

For an installment of a long running campaign I would hope to have a chance to think about important details ahead of time, but wouldn’t stress in the least if I didn’t have time for it. Knowing the setting and characters well is a great luxury!

I’ve always likened to best GMing to playing Jazz, but getting good at Jazz requires some serious work. I found that the longer I was running a campaign, the shorter my prep time got. But I wouldn’t say that I was going in blind or even unprepared. I think I just got really efficient. Running a campaign used to burn me out pretty often. But that was mainly because I was writing the games as mini movies. When I took more of a sandbox approach, my life got way easier and I needed far less prep time.

I’m in the pool of people that you’re writing to: I can run without prep, but the sessions are usually better when I do prep.

Keeping a notebook with you is a good note; I find that my shopping lists are much better these days, since I add items as soon as I note that I’m low or out of something, instead of trying to remember until I reach paper and pencil.

After neglecting prepared materials for so long, I’m coming to appreciate them. I found that my con session of Dark Star (see tomorrow’s article) played out better than the scratch built Spirit of the Century scenario that I ran the next day. I had a more intuitive grasp of the Spirit setting (since I’d inhabited it and researched it), but the prepared scenario did a great job of providing tests that challenged the characters in different ways, varying the types of challenges, etc. For my Spirit game, I was mostly worrying up at the level of plot and setting, not delving into the specifics of varied resolution. That was neat to figure out.

Thanks for the good replies. Everyone’s prep time will vary of course. I agree with Tomcollective that we have to avoid the mini-movie trap. I fall into it myself a bit.

Looking forward to your article Scott. And nothing wrong with using pre-published materials. Sometimes it feels like cheating, but it isn’t.

Also, in terms of prep, just printed some grid paper to begin working on some maps I’ve been avoiding.

Good article. I love stuff like this because it can only improve my prep.

I carry one of those mini-composition notebooks and a pen wherever I go. That’s not only for prep but for sudden ideas and brainstorming.

You’re also right about not doing an original scenario for pickup games. In my GM kit I carry printouts of the sample dungeons from the Holmes and Mentzer Basic D&D books along with 1-2 One Page Dungeons. The D&D dungeons I’ve used so many times it’s easy to pull out, change a few things and go (they’re also great for introducing new folks to RPGs). The OPD’s are for when I want to change it up a bit – they’re a quick read and easily changeable (on-the-fly if necessary).

I’m a total notebook guy too. Then I have to try to find time to eventually get it in typed form so I can use it for actual play.

And I agree with the OPD’s and scenarios from the books. I’ve run “The Haunted Keep” and “Rebel Breakout” from the 1st edition WEG Star Wars more than once with a lot of fun.

Being relatively new to GMing, I find prep to be fairly invaluable. I’ve been running D&D 5e, mainly the starter set adventure The Lost Mine of Phandelver and now Hoard of the Dragon Queen. I did a fair amount of prep for the final session of Phandelver, having encounters typed up (complete with enemy stat blocks) on a few sheets of paper, and I found that everything ran exceptionally smoothly. I did pretty much zero prep for the first session of Hoard, and I found that all the flipping back and forth I needed to do in the adventure book and the Monster Manual really slowed things down. I’ll definitely try to make sure I have the next session’s encounters typed up beforehand!

Thanks for the comments mrm1138. One of my players was talking about a different GM and how the group pounced on him for being unprepared: “Dude, you had two weeks to prepare” they told him.

Sounds like you are on the right track for doing what you need to reduce your stress during game time.

Running Apocalypse World and Dungeon World taught me how to think on my feet, ask my players questions and riff off of their answers. I’m running D&D 5E now but I typically show up for a session with maybe a sentance, phrase, an interesting NPC or even just a creature in mind. For a recent session the only prep I had was that there would be Hell Hounds after the PCs, but that they would be cold and spew frost rather than flame which threw them for a loop. We also had a great time that evening exploring an ancient tomb I designed on the spot as they delved deeper, on a quest that had been shaped by the addition of a new player who had just finished making his character at the table that evening.

It’s kind of scary to play without the safety net of prep the first few times, but I got used to it, and began to enjoy it more. It took me some practice to fully embrace the idea, and it’s probably not for everyone, but I don’t think I could ever go back to full on prep now.