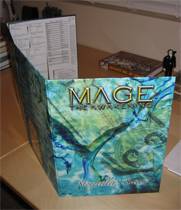 Back when I was in high school, four-panel GMing screens — a huge improvement over three-panel screens — seemed to be pretty rare (my first was the one for Call of Cthulhu 5th Edition).

Six or seven years ago, the only way to get a hardback screen (one with panels like the covers of a hardbound book, rather than flimsy cardboard) was to buy one of White Wolf’s very sexy limited edition sets, which came with faux-leather hard screens.

I like hardback screens for the obvious reason: durability. My oldest cardboard screen (1990ish) is still kicking, but it definitely shows its age. Hard screens are also less susceptible to being blown over or knocked down, as silly as that sounds.

Best of all, these days they’re everywhere:

• White Wolf [1] makes a four-panel hardback screen for every (or nearly every?) game line they publish. They’re well made, the fold nicely and they look great from the outside. Of the two I have (nWoD core and Mage), the Mage screen has a much more streamlined interior, but the nWoD screen has a more neutral exterior for use with other systems.

• Exile Game Studio [2] just put out a very sexy four-panel hardback screen for Hollow Earth Expedition. I’d buy this to put my players in the mood for any pulp game, not just HEX (although HEX is a blast).

• Pinnacle Entertainment Group [3] sells a customaizable, three-panel landscape-format screen (low, wide panels rather than tall, narrow panels). It’s made like the cover of a three-ring binder, with clear pockets on both sides to insert your own charts, artwork and info. The $27 price tag puts me off, but I love the concept.

I have a PEG customizable screen. I only use it for con games and a few other events and I still think it’s totally worth the money. The most awesome thing about it is that there are pockets on both sides, so you can have some custom charts on the inside and a compelling piece of art or something for the players to look at.

Were I a screen user, I’d own one of the PEG screens. The customizable pockets and landscape approach both work for me. I really like the idea of putting pictures or notes pertinent to the current situation on the outside of the screen, and the landscape approach hides less table from the GM.

I have one of the PEG customisable screens, and it’s very much worth the money.

The landscape aspect is *awesome*, because it gets the hell out of my line of sight and allows me to interact with the players much more. This is far more valuable than I expected; I can’t use a portrait-aspect screen anymore, it’s too much of a barrier to communication.

The fact that it’s customisable, both GM side and player side, means I use it for any game I like, presenting art to the players or a campaign map or handy charts or whatever, and my custom crib sheets for the game rules and campaign on my side. Thus, it’s easily worth it if you ever plan on running more than a single campaign 🙂

The fact that it’s hardback adds durability, which, as you say, is worth paying for in a GM screen.

It seems an extravagant price tag, and I won’t deny that it pinches when you pay it, but it’s a very useful tool.

Wow, I feel like a Cheapskate. I made my GMing screen by cutting one of the panels of a cardboard box and spray painting it black 😉

I went to a restaurant supply house and bought some clear plastic Menu Holders that make great GM screens, and allow me to customize them at any time by slipping things in and out.

I still fondly remember my old AD&D 1e screen. It was actually two tri-panel screens, giving me a lot of space to mark my territory/hide my stuff (of course, in those days, there was no laptop). I loved it so much that I had duct tape reinforcing the sides when it started coming apart!

I’ve recently gone anti-screen. The laptop does a good job of hiding my notes, and I keep the screen folded beside me to use as a reference tool (now I have Stephen Lynch in my head). Since I roll my dice in the open, I really have no use for a screen.

I totally love hardback screens. I have a grey ugly one with clear pockets on both sides.. 4-panel portrait. I have no idea where I got it from.

It’s awesome, other than it’s ugliness.

I find it necessary during a particularly… stressful… session. Also it helps demark who is in charge around here… the guy with the armor plated GM screen, that’s who!

My only dissappointment was when Kinkos said it was too thick to put through the laminator. 😛

Quillion: Thanks for the direct link. In fairness, I didn’t link directly to any of the screens — I figured the base site links would be simpler. 😉

On a related note, my group’s D&D GM picked up the World’s Greatest Screen, a four-panel (portrait) customizable jobbie, and used it for our game this past Saturday. I’d say the gray could be jazzed up, but we liked the outside (where he put pictures of our characters) and he liked the inside (where he had sheets specific to our adventure), which is the important part.