Lenny Balsera–His Design Does Not Dictate Your Conversation

*Author’s note: A draft version of this article was accidentally published on 12/08/2011. That version did not accurately convey Lenny’s ideas and thoughts and was quickly removed. This version is the approved final draft.*

A fairly common discussion, or argument in some cases, that I have observed gamers having is whether or not a GM should run a game exactly as the rules are written, or if it is better to use house rules or even hand wave certain rules instead. I have my own opinion on this matter, but why not get the opinion of a game designer instead?

A few miles from the glitz and glam of the Las Vegas strip I had the chance to talk with Leonard “Lenny” Balsera who is the ENnie award winning author and lead system developer of Evil Hat Productions’ The Dresden Files RPG books Your Story and Our World. I was attending a conference for work, and Lenny agreed to meet with me while I was in town since he was living in Las Vegas at that time. Unlike the façade of glamour and riches that Sin City is famous for Lenny is anything but a phony. He speaks his mind, is vulgar when civility would be insincere, and listens to a person’s opposing view while defending his own beliefs graciously. I instantly liked him from the moment that I met him. 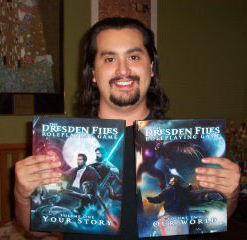 Between a fine dinner at Yayo Taco and drinks at the Freakin’ Frog I asked Lenny for his thoughts on being a GM versus being a game designer. What did he think about people changing his work in order to run their games?

“You do not need my permission to change it.” Says Lenny. “It exists the way that it is precisely for you to make those decisions.”

Lenny then provided me with some insight into his design process.

“When I work on a game system I need to think of how the design speaks to the people at the table. I follow Vincent Baker’s and Ben Lehman’s premises that RPGs are a conversation. The rules explain how each role engages in that conversation. The purpose of game mechanics is to change our habits of communication.”

And this is where Lenny makes it clear what the distinction between being the game designer and a member of the group is. The rules present expectations and guidelines in order to help facilitate the conversation, but it is the GM and the players who do the actual work of facilitating that conversation.

“As a member of the group you need to give the maximum dramatic interest that you can to the players, not the characters. You are dealing with the people, and not the rules.”

According to Lenny’s approach it is the unique combination of the people playing the game reacting to the conflict presented by that game that matters the most if you want to run a successful RPG. A game designer cannot foresee how every type of player is going to react to every kind of situation. If a GM needs to alter or ignore a set of rules in order to facilitate the conversation taking place at the game table so be it.

In fact, Lenny has a great respect for rules that are designed to seamlessly aid in the facilitation of a game’s conversation. He cited the telegraph rule from Margaret Weis Productions’ Smallville Roleplaying Game as an example, because it requires the players of the game to state their intents to each other before engaging in certain types of conflicts, such as trying to deceive or convince other characters to behave differently.

“So many miscommunications at the table come down to a question of intent. By having people explicitly state what their intentions are the game plays much more smoothly, yet some rules fail to encourage that. Some rules even discourage it, whether intentionally or not.”

Lenny believes that rules like the telegraph rule are less likely to be changed or modified by a group, because these are the types of rules that facilitate the conversation taking place. Yet even if a rule was designed to be seamless and to improve communication at the table, it is still fine for a GM to ignore or change such a rule if that is not the experience that a group is having at the table. Every group is different, and a GM always knows the group better than any game designer can ever hope to.

“I’m very much against compromising a game’s design while working on it, but that is a publishing matter. A GM is not compromising by changing or ignoring the rules. The GM is accommodating the group’s needs, and only the GM can do that. Not me as the game designer. My work is done. If I did a good job, then the GM’s job should be easier.”

What are your thoughts on the matter? Do you agree or disagree with Lenny’s approach? Leave a comment below, and let everyone know how you feel.

Want to provide anonymous feedback to me with the option to have me respond? Visit my SayAt.Me page and have at it!