Learning From… The Americans

Having just wrapped up its first season, the FX Cold War spy show seems a natural selection to spend some time dissecting, looking for elements to use (or avoid!) in your games. Suffice it to say that there will likely be some spoilers involved, so if you haven’t seen up to the season finale, you may want to come back a bit later.

The Americans is about two KGB deep-cover operatives who are put together by design to act as a newly married American couple, Elizabeth (Keri Russell) and Philip Jennings (Matthew Rhys). Over the years this couple has the typical home, given birth to two children, Paige and Henry, and operate their own travel agency in Washington D.C. These agents are both part of Directorate S, who focus on high-value intelligence, receiving their orders from radio signals and their estranged handler.

The key element of The Americans is the fact that it is set in the early 80s (1981) and deals less with spycraft and more about the relationship between these two KGB operatives. Their children have no idea that their parents are actually Russians or that they’re spies. Things are further complicated as FBI Counterintelligence agent Stan Beeman (and family) move in across the street from the Jennings. 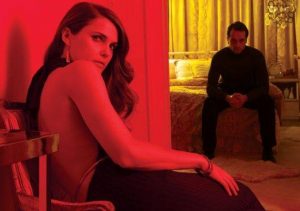 The Americans doesn’t fool around: they throw you into the action fast. There’s an early “accident” (a death was involved) and our intrepid agents—in their own garage—have to balance being hard-nosed KGB officers while their children are upstairs asleep. At the same time we have a newly reassigned FBI agent, Beeman, who is, of course, part of Counterintelligence. In fact, early in the show Beeman, sensing that something just isn’t right with the Jennings, breaks into their garage, looking for clues.

The stakes are equally high in the Jennings aren’t asked to handle small affairs; being deep cover agents they are only activated for the most serious of tasks. Characters in your own games should have the same benefit. The PCs are the ones that stand out above all others. Of course, not everything goes to plan, and new wrinkles erupt, threatening to reveal the Jennings. Fairly early on the FBI becomes aware that there is a male/female “illegal” team operating in DC and the net starts to close in.

While the Elizabeth and Philip dynamic was originally forced as a sense of duty, over the years they’ve found affection for each other and two children to show for it, although that was also part of their cover directive. Philip isn’t entirely happy with how the KGB is handling things and makes noises about potentially walking away or defecting. Elizabeth early on has to decide about where her loyalties lie: her “husband” and family or the mission? The point being that the internal, personal dynamic has pressure being put upon it from all angles. In your own game this pressure should apply on the PCs as whole. Not so much to force inter-conflict, but have individual goals put in situations that run counter to the group or other members. Those are the kind of adventures that nearly write themselves as your players are playing off each other, instead of having an environment to react to.

Even after Elizabeth and Philip have resolved their differences that only opens up the avenue for another new problem as Paige begins to get a whiff that something isn’t entirely right with her parents. Resolve one plot hook and have another one waiting in the wings.

It goes without saying that in a spy show that not everything is as it seems. The Americans walks that fine line of giving the viewer enough information to try to guess what’s going to happen and piece together the clues versus hitting you with things completely from left field that you had no way of knowing. The same holds true in your games in that providing clues or information to the players should lead towards something, else why ask for the roll?

The 11th hour reversal is a time-honored tool of the GM, but with a game (and a show) so grounded in reality, relying on the double bluff can work to your disadvantage. Having unfettered access to always-perfect information—because you’re making it up—can lead down a path where the double bluff (or triple, or more) starts to become over the top. Sometimes, as GMs, the rose should just be a rose.

Now convincing the players of that might be more difficult. 😉

Being a child of the 80s, the backdrop for The Americans is a large draw for me. Coincidently in the past few years I’ve played in some conventional/modern day games placed in the 80s and the 90s with great success. Fortunately there is a bevy of ways you can educate yourself and engage the senses of your players to place them in your genre.

Focus On The Important Stuff

In The Americans one thing I really love and stands out is how time isn’t wasted on useless crap. The Jennings run their own travel agency but they’re in and out so often there’s no way they could run it. Is it funded by the KGB? Do any of the employees find it suspicious? Who cares! It’s a cover, it’s convenient, and it works.

The same holds true with the stash of weapons, cars, and the makeshift interrogation/recovery warehouse. The list goes on and on. Same with your games: keep the focus on the important stuff and don’t linger on the unimportant things. If the players are driving down a path that doesn’t lead anywhere then just say “okay” to get things back on track.

Time skips work well here too. If the plot needs to advance then simply advance it on your own. This often happens in television shows, my favorite example being the drama 24. The protagonist couldn’t possibly get across Los Angeles to stop the terrorist in the time between scenes, but it doesn’t matter in the grand scheme of things because the next scene is what’s important, not watching deadlocked traffic. (Also, when did he ever use the bathroom?)

Give Them A Hand

As you would imagine, a spy show has a lot of moving parts, much like many of our own games. In The Americans FX goes so far to have a 5 minute recap “show” that brings the viewer up to speed. How this is unique is that it doesn’t cut into the show itself, leaving more time for the story.

At the gaming table I’m a big fan of the pre-game warm-up recap but that can chew up a good amount of time in starting your game. Consider utilizing other mediums, such as a e-mail recap or perhaps your own wiki for the players to reference.

Should your game have a lot of complexity, consider providing tools and aides for your players that grow as the plot does. The reality is that gaming is an activity that takes place for a finite period of time. Between games we’re at work, with our families, and doing all number of things, leaving little room to spend time thinking about gaming. It’s certainly not realistic for them to remember everything from session to session as they’re spread out. From the character POV no time may have passed at all but a week away from the gaming table may make some of the subtle details and clues difficult to remember. Players can also be encouraged to take their own notes.

It’s certainly fine to have complex plots and adventures, but remember that we’re doing this to have fun. It shouldn’t feel like work, for either you or the players.

In our group we’re fans of using a carrot—such as a Story Point or whatnot—for the player who wants to do the recap. The interesting part being that inevitably the other players jump in and now we have everyone at the table engaged. That’s a good thing and has everyone warmed up, ready to go!

Honestly, I sat around for quite some time to find something in The Americans to highlight not to do in your games but came up short. That’s okay; it’s a testament as to how good the show actually is! A fan of The Americans or the spy genre in general? Share with us below!

4 Responses to Learning From… The Americans