Learning From… Person of Interest

There’s a decent chance you haven’t heard of this CBS drama–recently voted the People’s Choice “Best New…”–so we’re not sure how long it will grace our screens beyond its first season. But the question remains, who will help you if your number comes up?

Person of Interest stars Jim Caviezel and Michael Emerson as Mr. Reese and Mr. Finch, respectively. Mr. Finch has built a top secret machine fed by NSA data in a post-9/11 world that allows the machine to detect “relevant” threats to the country. The machine also spots “irrelevant” threats, such as a premeditated murder plot or a person who could be the target of a violent crime. Every night the machine erases the irrelevant list after sending Finch a copy comprised of nothing but social security numbers.

Each week Person of Interest focuses on the protagonists trying to help–or stop–the person who’s name has come up. The machine doesn’t give details, which turns each person of interest into a bit of a character study. Who would want to kill them, or is the irrelevant person actually the threat? 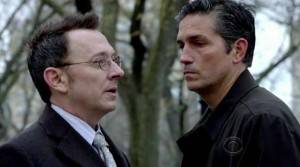 Person of Interest has several sub-plots going as well, most notably how the machine was built, Finch’s guilt over the death of his business partner and friend, as well as the demons that haunt Reese. If that wasn’t enough the police aren’t keen on having a vigilante running around New York. It’s an intriguing setup with multiple layers. Personally, I like seeing Jim Caviezel channel his inner Count of Monte Cristo one more time in the suave and soft-spoken John Reese.

So what takeaways from Person of Interest could be drawn into our games?

One of the mid-season changes in the show revolves around the determined Detective Carter (Taraji P. Henson) who’s trying to capture the mysterious Reese. It served up for some good drama for half the season until it became clear that Carter was out of her league. Thus enters the CIA, looking out for their missing asset, unwittingly pulling Carter into their plan to either recover or eliminate Reese.

It’s a good example of raising the stakes and challenging the character with a more credible (and believable) threat. While Carter and Reese had some nice cat-and-mouse encounters, there was never any doubt that Reese would outwitÂ her.Â  The CIA now provides that overarching element of risk that Reese and Finch have to deal with every week while still trying to protect innocents. It’s important in our own games that the characters be faced with credible threats worthy of their status.

Previously I’ve highlighted the qualities of making characters more believable in making them fallible. The occasional mistake or plan that doesn’t quite go as intended. Person of Interest does this as well but even upped the ante some more. In one episode Reese is betrayed by Carter and left in the sights of the CIA, who put a bullet in his gut. Bleeding out, Reese barely escapes with the help of Carter and Finch. Where this deviates from most storytelling escapades is the following two episodes still has Reese dealing with these consequences.

In the next episode, which has wonderful shades of Rear Window, Reese is confined to a wheelchair, leaving Finch to do much of the spycraft in the episode. It’s a pleasant role reversal. It also humanizes Reese for the viewers. Following that, Reese is back on his feet but takes a punch in his still-healing wound that ends a fight with the opponent getting away. Reese still wins–he’s the protagonist and a badass–but he’s still dealing with the consequences of being shot two episodes ago.

Most games abstract not only damage, but the healing as well. The story typically moves on, and the wounds of the past forgotten. Resist that urge and have the scars of the past linger a bit longer.

Foreshadowing is a powerful tool and it’s a darn shame that Person of Interest lets a ripe opportunity go by every episode. The machine spits out a new number every night, an obvious bridge from episode to episode, teasing into the next. Sadly, the writers don’t take advantage of this opportunity.

Realistically most GM’s probably won’t be able to pull this off either, but if you have the luxury of planning an adventure ahead, consider doing so. The tease help sets up the story for the next adventure, gets your players thinking–and anticipating–the next session. Even if you don’t have your next adventure plotted out, consider dropping the tease anyway to place yourself under some creative pressure.

A fan of Person of Interest? What elements of the show could you incorporate into your own game?

3 Responses to Learning From… Person of Interest