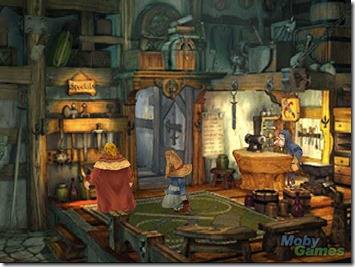 Inspired by Troy’s Fantasy Wagon Train article, it struck me the other day how much I loved walking into weapons shops in the video game RPGs. Having this small, free form area that was full of interesting visual tidbits, a couple of interactions with NPCs, and a selection of items which might add some element of uniqueness to my current play experience delighted me to no end.

I also remember that experience in my first roleplaying game. The Game Master drew out my search for armor and went into detail about how I was having it custom made, what the search for the shop was like, and how I would have to wait a few days for it. It wasn’t that big of an element in the game, but it is something I’ve never forgotten the feel of. To that end, here are some brief descriptions of weapons shops for use in your games. Since I went a little more in-depth with these, I’ll be splitting it into Fantasy, Modern, and Sci-Fi over the next week or so.

Proprietor: Joaquin SagarelÂ  (Portly, big moustache, leather apron, big smile, tan skin, booming voice)
Description:Â  A small street cart with a red awning, this weapon shop is the home of a travelling weapons vendor. The cart is laden with weapons of all sorts hung from hooks, piled on the fold out tables, sitting in barrels, or stuffed into crates set up behind the cart. There is a small logo of two crossed griffons claws sewn onto the awning. Many of the weapons bear this logo as well. A donkey is tied up near the rear of the shop. It is the logo of Joaquin’s brother, Andavin, the smith who makes or repairs most of the weapons. Joaquin tries to get a good deal, but one does not get a sense he tries to cheat anyone.
Mundane Items: Small and medium sized swords, many knives, halberd heads, arrow heads, exotic swords, a few metal shields taken in trade, a few small maces, and one solid warhammer.
Quality: Medium to Excellent. The arms show great care in their creation, but there are a few that are merely basic quality. Many of the weapons are taken in trade so that there are cheaper goods to sell.
Items of note: Hanging on one of the corners is a green colored bow made entirely out of metal. The flexibility is supreme, despite the medium. The flexibility doesn’t come from any magical source, merely from a special process that Andavin, the owner’s brother, has been working on. This bow provides a small bonus to accuracy and damage.

Proprietor: Matt Balkin (tunic, short hair, bright smile, very friendly), Jeff Balkin (moustache and goatee, sophisticated, wild brown hair), or Uriah Balkin (long red beard, slight hunch from doing labor himself, wears a white shirt and brown pants with suspenders)
Description: One of 3 weapons shops owned by a triplet set of brothers, Balkin’s Weapons Outlet is a fairly stock weapon shop. The brothers make their money by purchasing weapons surpluses from armies or smiths that supply large groups. These purchases are split amongst the three brothers’ shops (each in different cities, or if you want to set up a friendly rivalry, each in different sections of a large town) and the individual owners are left to make a profit on them. Depending on which shop you are in, it might look a little different. Matt’s shop is well made of stone and mortar. Being the oldest, he inherited the store and set up the 3 shop scheme to prevent rivalry amongst the triplets and maximize profit. Weapons in his shop are displayed on hooks along the walls, with extras of the same type kept in the back. There is a practice dummy to test out the weapons and he keeps a sharpening stone to make any repairs as needed. Jeff’s shop is in a less prestigious area but is built from solid oak and cherry wood. The shop has a very cozy feel, and many of the weapons are laid out on tables with crates underneath them. Jeff prefers atmosphere and commissions paintings of great warriors to inspire his customers. Uriah, the youngest brother, had the least starting capital and operates out of a small thatched roof hovel with a sign out front. Barrels and crates serve as display for his weapons, but his stock is the same and his prices are usually cheaper to entice customers. He plays up a country yokel persona, but can be shrewd in his dealings.
Mundane Items: Multitudes of the same item types. Swords, maces, cheap shields, a few batches of exotic weapons, large 2 handed swords (a deal from a country that neglected to properly train their soldiers in the use of the unwieldy things), small curved short swords, collections of staves, a special deal on metal pauldrons that can be modified to fit into any current armor, many sets of boots, an “adventurers special” of reclaimed orc weapons
Quality: Fair to Medium. The weapons here can all be tested and inspected to ensure quality. All of the brothers offer a guarantee that any weapon they sell can be exchanged for a similar one if it breaks during use.
Items of note: Some of the reclaimed orc weapons are actually magical and of exceptional quality, if their origin and design can be looked past. Each of the brothers tries to make trades to outdo the other brothers and increase their shop’s standing.

There you have it. Two weapons shops (plus a bit more with the three brothers thing) that you can use in your next fantasy game. Tweak as needed to fit your game. I’ll have parts 2 and 3 up soon with Modern and Sci Fi weapons shops. What sorts of things would you like to see in those articles? I’ll try to gear my writing to concepts people would find most useful. What do you think of weapons and item shops in games? Are they something you make detailed or do you just handwave over them?