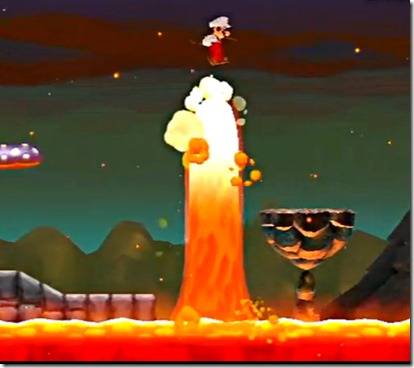 After I got back from Gencon, I was hit by the cold that would never go away. This resulted in my work days being 1/2 productive and 1/2 fuzzy headed sitting on the couch waiting for medicine to kick in. I watched a lot of TV and finished a lot of video games that I had dipped my toes into and never played past that. One game that I played was the Super Mario Bros. game for the Wii. There were more than a few times that my heart rate spiked trying to get through one of the many particularly nasty levels. I got to thinking about when the last time a role-playing game got me so invested in success or failure that I was physically anxious. I could tick off the memories on one hand, but they were vivid and enjoyable memories. There is definitely a place in role-playing games for those drowning in immersion, heart thumping, anxiety-ridden moments where your characters live or die by the die roll. Here are five things you can do to help build those moments.

The best heart thumping moments in video-games, movies, or books are short, contained moments where everything hinges on what happens next. A different kind of tension is derived from a long drawn-out exposure to peril, but the kinds that make your heart thump occur when the current moment is life or death.

If you want to create a moment that has tension and anxiety in your game, then narrow your focus down to that one moment and ask what about that scene is going to cause tension. Make a quick list of all the elements that could cause the kind of tension you want and focus on one or two of them. Don’t worry about leading up to or foreshadowing the tension causing elements, but work on presenting them in a way that makes the players have to suddenly rethink this situation. Suddenly, the dungeon crawl becomes a life or death situation if they want to continue onward.

When we buy-in to a particular game, we understand that there are certain ways we will resolve conflicts. A tense moment occurs when those rules don’t apply and the tools we had to make things easier don’t apply. In one D&D game a long time ago, my fighter was invincible because of the cleric’s backup and buffs. Pimped out with divine protection and ready to take damage and kick ass, he opened a door and was transported to another place and all magic was stripped from him. In this snowy landscape he had to take on an incredible yeti-monster without his protection spells or his magic sword. It was an an incredibly tense fight that the character barely survived. It was also one that I will always remember. It was tense for everyone else too, they just had to sit and watch, but they were invested. When we, as Game Masters, flip the situations on the players, then they have to face challenges without the tools they rely on. Be careful to make sure that the flip does not feel arbitrary so that the feeling of being “cheated” out of being able to use their characters is not an issue.

3. Time Is Not On Your Side

In all aspects of life, when we get a chance to slow down and think about things, we can usually keep calm and figure out the best solution. It’s when we have to figure something out immediately and it has to be the correct choice that we get tense. When time is not on the players’ sides, then their actions have to be right. There are no second chances. Using a time in the real world or using a timer in the game can increase moments of tension. If you tell them that they have 5 minutes to figure this out and put a 5 minute timer down, then things change. If you say that they have 10 rounds to disarm the bomb and set out a die that you use as a counter every round, things take on another light.

4. The Stakes Must Be Dire, But Success Must Not Be Unattainable

One thing that always got me about the Super Mario games was how dire it was to be Mario. Touch a turtle, lose your power ups or die. Miss that ledge, you die. Spike wall touches you, you die even though you had power-ups. To create situations that make players’ heart’s thump, the stakes have to be dire but success has to be an option on the table. Without it, things just seem unfairly stacked against the players. If a poisonous spider crawls in one of the PCs ears and they’ll die from one single bite, then there has to be a chance for someone to pull it out without the PC dying. “Sure, he can grab the bug with a roll at this hard to get but not insane difficulty. It’s doable, so it is all down to this dice roll. Roll now.”

5. The Players Should Know the Consequences Beforehand

Finally, the players have to know what the consequences of the intense situation are beforehand. If the stakes are dire but the PCs don’t know that, then there isn’t really a lot of emotional investment in the success or failure of the situation. Facing a squad of mercenaries that are probably equally as powerful isn’t a cringe-worthy situation, but facing the nigh-unkillable demon that you just saw deal 199 damage to a 90 HP NPC veteran on his first attack (that consequently got rolled in the open), that makes you really hope your dodge rolls succeed.

The PCs are exploring a cave and have just eluded an army of monsters that were too big for them to take on. The GM has everyone roll a perception check. One PC can hear the monsters hot on their trail and knows that any combat against them would probably overwhelm them. (Know Consequences) Another PC notices a side passage that they can squeeze through. Getting through, they have found that the only way across is a series of small pillars above an incredible drop that will surely kill them. (Know Consequences, Dire Stakes) The PCs see that the monsters have found the crack and are trying to work it open more. The Game Master sets down a timer saying that it will take 14 rounds (6 seconds) of time for the monsters to get through. He sets down a die to mark off the rounds and says round one is now. (Time Is Not On Your side) The Gamemaster declares they need a die roll to jump to each pillar. They get once chance per pillar, but if they fail, they die and the chances are medium to high for each pillar. The GM pulls out a stopwatch as the players begin talking about how to get across, the GM marks them down to round 12 as they talked for about 12 seconds real-time and that is easy enough to track. Yes, he answers, talking is normally a free action but you are in a life or death, timed situation right now, so I’m going to keep some track of how long it takes you to form a plan in-game. If you were really in this situation in real life, the time you talk about how you get across would still count. (Normal Rules Don’t Apply). The players begin making rolls to get across, each of their fingers are crossed and they are pulling out their biggest dice superstitions. Even if the players decided not to try to jump across and instead found a way to plug up the hole or blast the monsters as they came through, the situation would still remain tense and the stakes would still have been dire.

Moments that build tension and change the rules to do it might cause some out of game tension, so consider carefully what you do to get this kind of immersion. Heart-thumping anxiety ridden moments in games will be remembered, and they will add a bit of spice when your game has started to feel routine or too easy. Look for scenarios in movies, books, video games, and see if you can convert them to your game of choice. Use them sparingly, but use them effectively with some planning and your players will never forget it.

What do you do to build tension-laden moments in your games? How often do you try for a moment where the stakes are life and death?