Johnny’s Five — Five Things That Puzzles In RPGs Should Do 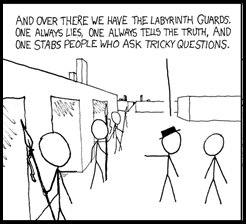 I’ve been running my gaming group through a dungeon using Dungeonaday.com. In the last session the group came across a really well written puzzle and it got me thinking about the use of puzzles in games. Puzzles can be incredibly fun or incredibly frustrating. From the GM’s perspective, you don’t want to give the players something so easy it won’t feel like they have overcome anything, but from the player’s perspective you don’t want anything that is annoying and obscure in its solution. With this in mind here are 5 things that I think puzzles in tabletop role-playing games should do.

Puzzles can be a great addition to any role-playing game, and they have deep roots within the genre. What are some of the best puzzles you have used? What other advice have you got on using puzzles in your games? How pissed would you be if you never found the puzzle I secreted away in this post? There is no puzzle, stop looking!