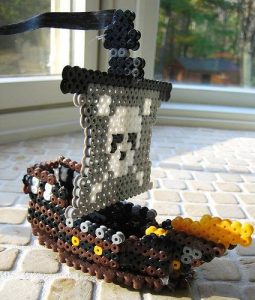 [1]Arrr, ye fair and gentle readers. Ye be knowing what today be, donch’a? Why of course it be International Talk Like A Pirate Day [2]. That be meaning we ought to be talking about, and like, Pirates. Well ole redbeard Johnny has a small treat for ya. In honor of the day, I’ll be dropping some nuggets o’wisdom on how to make your game a little more piratical.

So what be ye thinking about a pirate game? Have ye run or played in one? What was the most fun thing about it?

Avast! I have a somewhat related query fer a future arrrticle:

How does one go about to make a ship or base of operations something that the players will genuinely feel like the characters’ home? It’s always nice when the players care about their ship / spaceship / fortress / underground secret lair, but how does one help build that feeling of “home”?

[6] – I’ve got a couple of things planned along those lines. For an upcoming convention game, I’m going to be building many airship models and planned to do a video on how to do that. I’ll see about expanding and talking about other things to do with a base as a companion article.

To find a few in the archives, the article no place like home deals with changes to a homebases ( [7]) and I wrote one on ships and transportation a while back ( [8]). As far as what you are specifically asking for, I’ll see about addressing that in an upcoming article. Off the top of my head, I can think of a few visual tricks:
* Make a map of it. That way they can see what it looks like.
* Have things happen there, like having it attacked so that they have to defend it or having it be the focus of some event.
* Make a trophy room. If you make a map, throw in a trophy room and tape their trophies onto the map so that it becomes significant.
* Give it a cool feature. My one group captured a base with a perpetual wind tunnel. A couple of modifications later and we had central air conditioning.

Anything that makes it unique and intertwines it into the party is going to make it feel like home. Arrrrr.

I just started a skypirates game and am about to have the third session later this week. One thing that I have been working on is getting the party together. One player joined a week late and wanted to play a noble. That means he is rich, so he is a rich merchant with a shipping business that is a bit down in its luck.

He is now aided by the party and their small, fast, and heavily armed ship. The ship the party has was issued a letter of marquis. Now the plan is to capture ships, loot them for the crown, and then turn the ship over to the noble to convert to a a cargo ship.

I am going to revisit this article when I am prepping for the game. It will be great during breaks from reading and working on papers for school.
I need to make a map of the ship they have. I am also working in a recurring villian, a dragon horribly burned from a geyser the party crashed this dragon into. They are scarred by the infamous enemies that lurk in the region, now they need someone chasing them when it can.

I am currently working on putting together a steampunk airship with dragon riders and sky cities campaign. The players will be considered pirates by some of the countries of the world, while having the letters of mark that make them official privateers for others.

I plan on having the buried treasure be in dungeons surrounded and filled with dangerous foes, and of course there will be rivals trying to grab the treasure as well.

I ran a pirate game a few years back. Some lessons:

2. Make your encounters interesting by varying the circumstances they occur in.
If every encounter starts with the two ships sighting each other on the horizon, and the faster one deciding to engage (or disengage) the encounters will be boring archery duels every time (big D&D game; really no fun). So what if a fog means the two ships are almost on top of each other before they see each other? What if one ship blockades another in a harbour? What if there are rocks and reefs that a clever (or foolhardy) captain can lose or lure his rival in? What about combat at night? In a storm?

3. Think a bit about distances and travel times.
You don’t need to do a perfectly scaled map of your entire world, but have a think about how long it takes to sail between places. A group of islands may take only a few days (or a day!) to sail around; some seas may take weeks or months to cross. Assuming you give your players at least a rough map (and you ought to; it can be vague), make sure they know which voyages they can take at a moment’s notice, and which ones will cause them to worry about supplies of fresh water.

[9] – That sounds like an awesome campaign idea. I may have to pirate it.