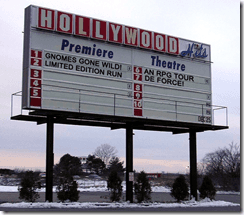 While I was watching old movies and cleaning out my basement a few weeks ago, I watched a movie that made me go “Wow! That was totally someone’s role-playing game!”.Â  It wasn’t the first time that happened to me, and this isn’t the first time that the idea has been discussed here on the stew ( 1 | 2 ). There are a lot of movies and TV shows that have the feeling of a roleplaying game in one way or another. There are some elements in these movies that can easily be picked up on:

Sure a lot of these are tropes of many different types of media, but some movies just resonate as “Game” to the RPG attuned mind. Some movies like these 5:

The GMing Advice?
Those 5 movies are just some examples of movies that have the feel of gaming sessions or campaigns, but what does that have to do with helping us all become better Game Master’s? Movies like this are a great example of building off of the elements we find in almost all RPGs and doing something different with them. While all these movies have the feel of gaming sessions, they also do things that are necessary to create the drama and action found in a movie. By picking out the gaming similar elements, we can see what else the movie does to create its feel. We can pick up on lessons new to us, or old lessons that we never should have forgotten but did. Examples?

Even sitting down and watching a movie like this before designing or playing in a game can get you thinking in a different way.

In trying to get the best examples of these kind of movies I could, I proposed the idea to the Gnomes to see their movie choices. Here is what they said:

Also, after writing the majority of this I came across Johnn Four’s excellent list of movies for Game Masters. Go check it out for more movie ideas. He mentions a lot of the ones that we Gnomes have mentioned here. Go check it out: http://www.roleplayingtips.com/articles/top_movies_for_game_masters.html

So what movies have you seen that feel like they were written as games? What about them might make you see your own games differently?

(Image: Modification of this image. From -Â  http://www.flickr.com/photos/dr_television/ / CC BY-NC-SA 2.0)