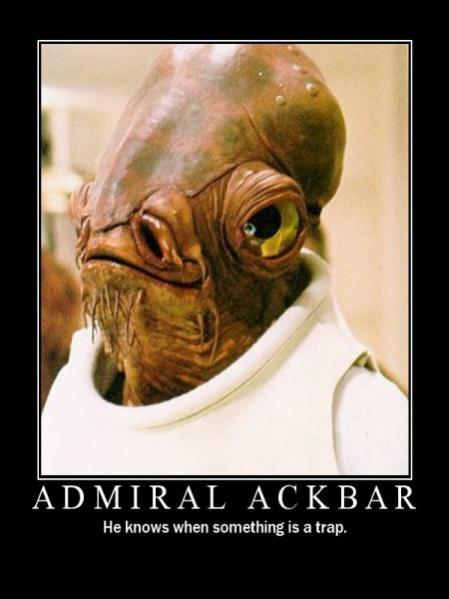 Last week, some friends were discussing adventure design for publication, but the conversation drifted towards a topic I hadn’t really thought about in a long time. Traps.

Way back in ancient days, in basic and early AD&D, traps were horrific. You fail your disable trap skill and you’re only one save versus poison from a grim death. Bigger than that, though, were the super traps. Grimtooth’s Traps was a series of books devoted to fiendish traps, lovingly explaining exactly how they worked, were installed, and even if they could be reset.

The traps were often deadly; a horrific maiming was often as merciful as they’d get. Knights of the Dinner table continues that fine tradition, with its “Deadly Trappings” articles. They’re typically system neutral, often with a sketch of the trap, its lure, or other elements that make the trap feel realistic.

We ruefully talked about the characters we’d lost, often describing the fiendish traps in some detail some ten or more years after they’d slaughtered our hapless PCs. They made quite an impression on us.

We started talking about the old traps, because we’d all run games recently where the traps were all wind-up, no follow through. Josh mentioned a giant boulder trap, described as huge and rumbling like the Indiana Jones movies, that only inflicted 3d6 damage when it finally ran you down–after you had a chance to duck out of the way. Or the magical axe trap tied to a floating log river crossing; somehow, when you leaped onto the log, an axe would swing around and bite into you. We couldn’t figure out how that would work–I suggested that the PCs must be spinning the logs like lumberjacks do, with axes attached to the initially submerged side–but there was no reasonable mechanism. We shrugged it away as magic, since there wasn’t a much better explanation.

Not all “modern” traps are so weak, of course. In D&D 3.5 and Pathfinder, a Symbol of Death results in instant death for 150 HP of people, if they fail their fortitude saves, just for glancing at (or walking over) the symbol. No cumbersome trap mechanics required… but also no satisfaction either. Just “you enter the room, make a save…”

In recent editions, traps often take place as part of the battle–as one element, one nuisance–rather than its own encounter. They tend to injure or impose conditions–they can be nasty, but the damage is usually something you’ll survive if something doesn’t take advantage of you while you’re weakened.

The way traps work reflects the rest of the system. In old editions, low level adventurers were unlikely to survive–randomly dying to a trap isn’t that different from dying because you’re a fighter with 3 HP fighting goblins. Similarly, the expectation that PCs are heroes from the start, from 3rd edition onward, means that “random deaths”–particularly without notice or a chance to influence the result–feel more arbitrary.

Skill mechanics have altered who solves the trap. In many ways, old trap designers needed a plausible mechanism because it had to be clearly explained and interacted with by the players. If the players jammed a crowbar in the mechanism, you had to have an idea of how it worked to adjudicate the results. In many ways, it was a duel of wits between the trap designer and the players. More modern systems shift the burden of solving the trap onto the character. Skills like perception, spot, or search let the GM highlight the trigger–the stone floor is less rough in that patch, you glimpse the tripwire moments before blundering into it, etc. Similarly, deciding to interact with the trap is less suicidal–you probably have something like a 50% chance of disarming it (after modifiers) once you’re aware of it, unlike older systems where even alerted, your chance by the mechanics was often only 12-20%. Conversely, old traps used to be evadable if you properly described evading it, while modern traps usually require a skill roll to avoid setting them off, even if you identify the mechanism. Can you balance as you shuffle along the lip of the pit, or successfully jam the mechanism with your crowbar? There’s probably a skill or stat roll to find out.

We have old traps: often deadly, cunning, and meant to be outwitted by the players. Overcoming them often felt like you’d outwitted them yourself. Modern traps are often a nuisance, a complement to a battle, rather than a replacement for it (especially in terms of screen time). When they are overcome, it often feels like it’s the PC who solved it–with their superior training, often a result of your decisions in character generation.

Your preferences on traps will probably align with your feelings about puzzles. Do you want puzzles solved by the characters, or puzzles the players beat? Whichever you decide, you’ll probably have similar expectations for solving traps–since, in the end, a trap is a specific type of puzzle. (For more on puzzles, see Johnny’s Five — Five Things That Puzzles In RPGs Should Do.)

Similarly, the deadliness of traps has a lot of knock-on effects. If walking down a corridor too hastily results in character death, you’ll have characters who move at a crawl, tapping the floor with their pole, peering around every corner with mirrors, etc. It has a very different feel from a group rushing through the battlefield, turning traps back on the locals, and pushing through to their destination.

Different types of traps are explored in John Arcadian’s Traps as More than Something to Disable. The Trap as Dungeon might be perfect for your game–a giant trap ready for interaction!

Is there a way to preserve the virtues of detailed, memorable traps, with dreadful consequences, without dragging play to a halt or turning bold adventurers into hesitant mice? In general, I don’t think so–traps are a reflection of the game world and its general rules.

In a specific instance, though, you might succeed in combining their virtues. For a modern game (like Pathfinder or D&D3+, you should probably stick to the default trap types (bleeders, inconveniences) throughout most of your adventures. When you switch modes–to player solved, detailed and modeled traps–you’ll need to sign post it clearly.

For the Trapped Tomb, you should provide sufficient definition of traps by default (like an old-school adventure), but skills should highlight key features, lead the character to muse about the required chain thickness, or otherwise provide additional clues about mechanisms. Provide ample evidence of the traps’ deadliness, to persuade players that these traps play by different rules. These traps aren’t just softening you up for the monsters, they’re the whole threat. You signal that you’ve toggled the world expectations for this location.

Can such an approach succeed? It depends on how accurately I’ve diagnosed the differences and their causes. Players might miss the prompt if they’ve grown used to their characters solving traps, and might grow frustrated that their highly intelligent wizard or their trap-crafting rogue can’t solve the problem. After all, the character is an expert…

How do you handle traps? Do you vary by system, or do they know that DM Steve always expects the players to solve the trap, whatever the rulebook may imply? Where have you seen good traps for recent editions, ones that are interesting and memorable? I look forward to hearing how you all tackle traps!