Introduction to Game Mastering, Part 3: More Things You Need to Get Started 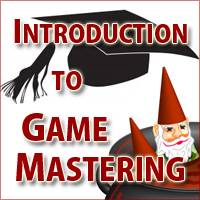 Welcome to Gnome Stew’s Introduction to Game Mastering series. If you’re new to GMing, this series is for you — and even if you’re an old hand, you might pick up a trick or two.

Want to read other articles in this series? Click on the “introduction to game mastering” tag at the end of this article.

In writing this series, I assume you have some familiarity with gaming terms and jargon. If you see a term you don’t know, just hit up Gnome Stew’s RPG Glossary.

This is Part 3 of Gnome Stew’s Intro to Game Mastering series, and continues the list of things you need in order to start GMing that started in Part 2. (Part 1 was all about the golden rule of great game mastering.)

For your first time out, I recommend using a published adventure. The majority of RPGs have several available, and many include one in their core rulebook (though more often than not, these are pretty mediocre).

Published scenarios have generally been playtested, thought through with an eye to the “average” group, and have good production values — often including maps, handouts, or other goodies. They’re also a window into what the game’s designers thought was most fun about the RPG you chose. They don’t always hit the mark, but they hit it often enough to be useful.

There’s no secret to choosing your first adventure: just pick one that sounds like fun, and run with it.

Once you’ve picked an adventure, read the whole thing. Then read it a second time with an eye to the rules — and if anything doesn’t make sense, reread that section of the rulebook. That will give you a good foundation for the next step: planning.

A Bit of Planning

If you’re planning on kicking off a campaign with your first adventure — the traditional route — then you’ll probably want to have your players create their own characters, rather than using pre-generated PCs (which are often included with adventures).

Character creation for an ongoing campaign is a meaty topic, and will be the subject of a later article this series. Don’t worry about it right now — let’s finish covering the basics first.

If, on the other hand, you’re just getting your feet wet, aren’t sure you’ll enjoy GMing, or there’s no slot in your group’s rotation for a new game at the moment, you can either go with pre-generated characters or have your players create PCs without worrying about their long-term viability.

There are also a few other things you’ll need to plan:

It can be easy to overplan, especially when you’re a first-time GM — don’t fall into this trap. The important thing at this stage is momentum. You’ve done the reading, you’ve picked an adventure, you know where and when you’re gaming, and you may have prepped a couple of flourishes to impress your players — you’re ready.

Feeling intimidated is far and away the most common reason why many players never make the jump to GMing: they’re intimidated by how much everyone else in their group knows about gaming — and doubly worried about how experienced their current GM is.

Game mastering isn’t rocket science. It’s much more akin to a game like Go, which is simple to learn but challenging to master — and like Go, you can have fun GMing even if you only know the basics.

All of the many details that go into becoming a fantastic GM can wait — you’ll be surprised how many things you pick up just from running your first session. You don’t need to absorb everything at once.

And consider this: What’s the worst that could happen? Even if everything goes horribly wrong, you’ll have a funny story to share down the road — and you’re not going to lose any friends over a bad game. Whether you discover that you love or hate GMing, you’ll learn something just by giving it a shot — and if you’ve made it this far, you’ll probably love it.

Being confident in your ability to run a fun game is one of the single most important things you can do to become a great GM. The moment you lose your confidence is when things start to go wrong — but when you keep your confidence up, and focus on the golden rule, you can run an awesome game.

You don’t have to be cocky, or try to overcompensate — or pretend you know more about GMing than you actually do. If you’re enough of a geek to read an article series on GMing on a gaming blog, you can be a great GM.

Dive in — and have fun doing it.

Next up, in Part 4 of this series: running your first session.

8 Responses to Introduction to Game Mastering, Part 3: More Things You Need to Get Started