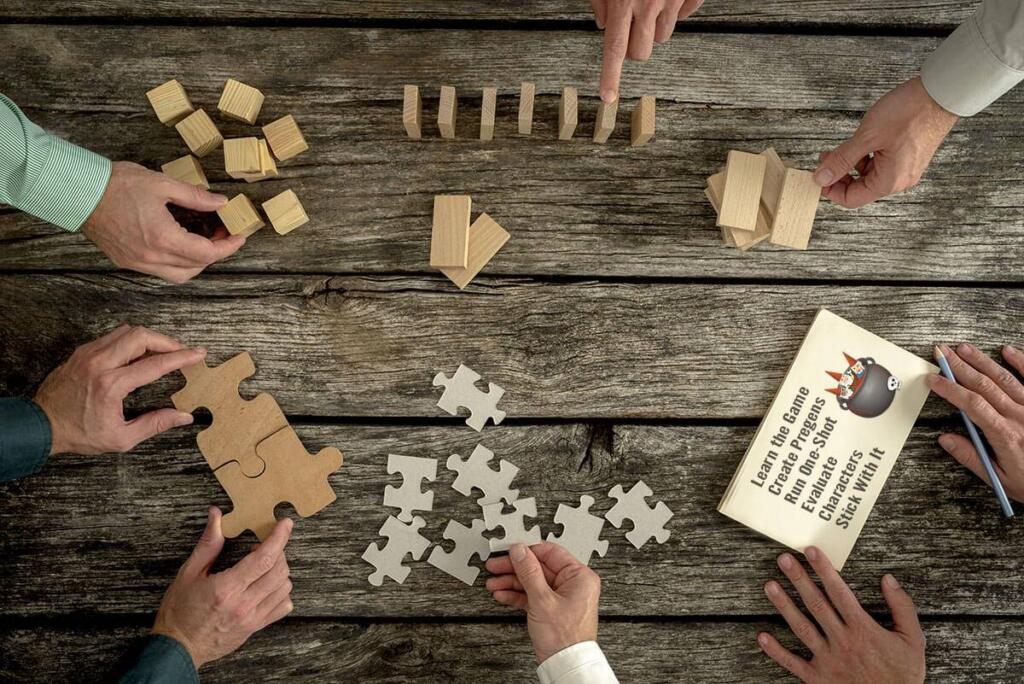 I suffer from “ooh… shiny!” syndrome. I love finding new toys and playing with them for as long as I can until… the next shiny toy pops up on the horizon. This applies to my role playing life as well. Looking around my office right now, I have at least fifteen different systems I’ve never played or run on the shelves. There are at least another dozen that I haven’t touched in more than a decade. It’s not because they aren’t good systems. It’s because I only have so much time to game and a limited number of groups (two, one firmly set in Pathfinder) to experiment with.

When the latest and greatest RPG hits the shelves (or Kickstarter), it’s on me to introduce it to the group. I’ve done this with dozens of games over the past 30+ years I’ve been playing role playing games. Here’s my approach:

This sounds like a no-brainer, but many people sit down with the core rulebook of an RPG and want to learn the game “with their group.” That’s not your role in this situation. Your role is to teach the game system, themes, ideas, and concepts to the players around the table. Yep. That means you’re going to be in the GM’s chair for the first little bit.

Whole articles, perhaps books, could be dedicated to this section, so I’ll be brief. Learn how to create a character. Learn how characters interact in competition (social and physical), when cooperating, when overcoming obstacles, and when interacting with the world. If there is a magic or powers system, at least learn the basic framework; memorizing all of the spells/abilities is not necessary. If there is a custom dice mechanic (and there usually is), become an expert in this system.

Lastly, create your own GM screen. I’m a big advocate of “The World’s Greatest Screen” by Hammerdog Games because you can slide your own 8.5×11 creations into the sleeves. Don’t just photocopy the reference material you need. Whip out your favorite spreadsheet software and manually type in the charts, tables, and reference goodies. The act of creating your own screen does take time, but it also cements the materials into your brain. This is a good thing. Also, since you did the layout of the screen, you’ll know exactly where to find what you need.

Now that you know the system, create some characters for the players. I usually interview the players and ask them what kind of character they would like to play. I give them the themes and concepts of the game and world which provides a creative compass. They’ll use this compass to guide them through creating a character concept. I’ll then take this concept and create one or two (if I have time) pre-generated characters for each player.

When I sit down at the table to run my one-shot session to introduce the game, I’ll go over the characters with the players and explain why I chose what I did, how the mechanics of each ability, skill, power, spell, or whatever works. Ask them to take notes, but the bulk of the rules referencing will be on your shoulders. After all, you’re teaching the game.

This requires just as much prep as the character creations, perhaps more. If the core rulebook comes with an intro adventure, use it. If not, hit the publisher’s web site and see if they have any freebies you can leverage. Hopefully, they have something along these lines. If not, you’re probably on your own for creating a one-shot.

If you do end up creating your own adventure, I highly recommend ensuring the adventure is tailored to the pre-generated characters you’ve come up with. Highlight their special abilities. Throw in at least one combat (maybe two if they go fast in the system). Ensure there is ample room for interacting with neat NPCs, and drop in some social combat if the system supports it.

If you find really cool things for the players to do with their characters’ abilities, you’ll hook them in deeper and faster. This is why I suggest for people to create the pre-generated characters before the adventure. Keep in mind that you probably won’t get around to allowing all of the players to use all of the characters’ abilities, so pick some of the cooler or more dazzling powers to allow them to explore.

At the end of the one-shot adventure, check the pulse of the game. Did it go well? Ask the players what they liked, where things could be improved, and if they would like to continue on with the system and/or characters. If they like the system, but want to explore creating their own characters, then you’ve probably got them hooked.

I’d also recommend checking in with them via email a day or two after the one-shot. This allows for ideas and reactions to sink in deeper and for the players to respond with more thoughtful and coherent ideas. They may have initially liked the game, but not the character, so their immediate feedback could have been negative. However, giving them some time to “cool off” might allow them to see the value of the game. The opposite can happen as well.

By taking the average of the two sets of reactions, you can determine if you, as a group, want to continue using the system. If you do end up sticking with the system (until the next “ooh… shiny!” pops up), then keep on reading. If not, then start over with a different system.

Allow the Players to Create Characters

Sit down the players and have them create their own characters. In this situation, you need to know the character creation rules, character options, abilities, skills, powers, and so on very well. This means you need to come prepared by doing lots of reading. It might even be a good idea to create some more characters on your own, so you can get the process down in your head.

Guide the players through creating characters just like you would any other game system. Keep in mind that the character creation process for some games may be wildly different from what you’re used to. If you’re a dyed-in-the-wool Pathfinder player, you may be used to creating characters alone, and when you hit the FATE Core concepts of sharing character sheets around the table to create linked aspects between characters, it might throw you for a loop. Before a single character point or die is rolled for churning out a character, make sure the group as a whole understands the concepts behind the character creation system.

Plan Out a Longer Campaign

Like the “Learn the Game” section, whole books, web sites, and sections of personal libraries have been dedicated to this concept. I can’t explore it here with enough depth other than to say, “It’s time for a longer campaign with the new characters!” This is the bread and butter of role playing, so enjoy it!

I will add this: If, during your one-shot, you found opportunities to tailor the new system to your group’s play style, now is the time to adjust things with house rules.

Stick With It… For a While

Once you have the campaign underway, try to stick with it for a while. I know. It’s going to be hard. The next great thing is already on your shelf and waiting to be played. If you swap out systems too much or too often with your group, it’s going to be hard to maintain their interest in allowing you to run games for long. Make sure that if the players are still having fun, you stick with the current system. As soon as interest wanes in the current system or campaign, then you can pounce again by introducing the next game on your list.

Is anyone else out there afflicted with “ooh… shiny!” syndrome? What are your approaches to bringing the new games into the fold of an existing gaming group? I’d love to see what you have to say.