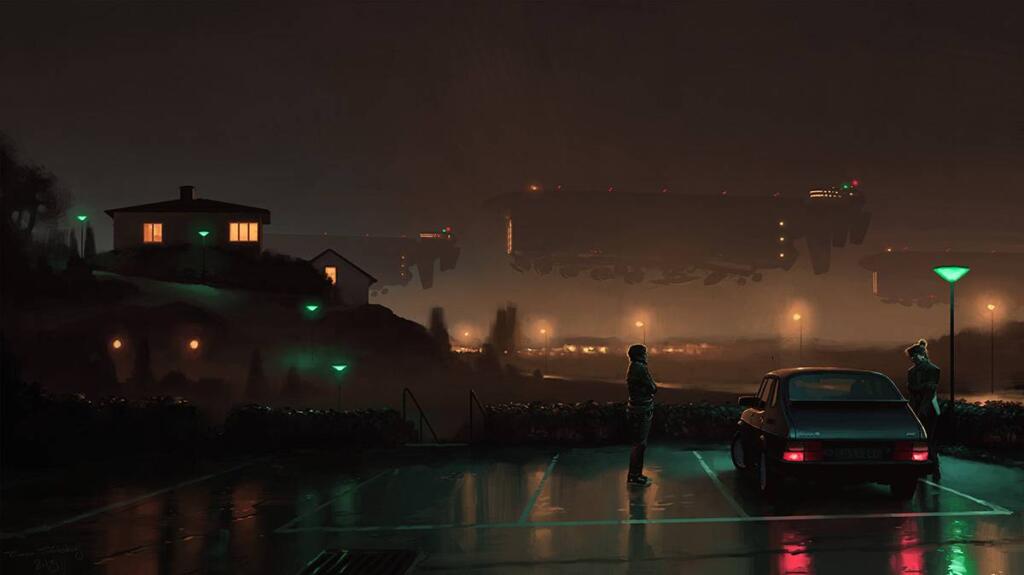 Frequent Guest Poster Keith Garrett has been getting into Tales From The Loop recently, and he’s been writing about it on his blog. He decided to doff a red hat and swing over with some of his articles about this awesome looking game.  Check out his interviews with some of the creators below. – Nostalgic John
As we covered recently in our article about hosting a rad 80s gaming party [1], Tales from the Loop [2] is a new RPG based on the strange, Swedish, 80s-infused art of Simon Stålenhag [3]. I had a few questions for the designers of the game, and they were kind enough to give me totally tubular answers. The interviewees were:
Keith Garrett: How did it come about that Simon Stålenhag’s art book inspired an RPG?
Nils Hintze: It was a stretch goal in the Kickstarter for Simon’s books [4].
Tomas Härenstam: When he started creating his art, Simon himself was inspired by the 80s edition of the classic Swedish RPG Mutant–which is now published by Free League as Mutant: Year Zero [5]–so his evocative art had immediate appeal to lots of roleplayers. And for us, as an RPG publisher, it was of course a dream come true to make an RPG out of such an amazing setting.
KG: How long have you known or worked with Simon Stålenhag? Was he involved much with the RPG?
TH: We have worked with Simon since 2014, when we released his Tales from the Loop art book in Swedish. Simon has had a supervisory role for the RPG–he’s been a “lore master” and we have picked his brain a lot to make sure the game lines up with his vision for the Tales universe. And, of course he created the new art for the game!
NH: Naturally, his ideas about how things in the Loop universe work were important and he gave a lot of input on the world and its atmosphere.
KG: Matt, had you seen Simon Stålenhag’s artwork before the plans for a game were under way?
Matt Forbeck: I had seen the original Tales from the Loop art book way back when it was on Kickstarter. At the time, I had no idea that they were eventually planning to create a tabletop RPG based on it. I just loved Simon’s work, though. It’s so stunning: simple and realistic while filled with fantastic bits that feel like they fit right in.
KG: If I’m understanding correctly, the Year Zero game engine used in Tales from the Loop originated in Mutant: Year Zero. Is that right?
TH: Yes, that’s right! It was built specifically for Mutant: Year Zero, but has since grown and been adapted to several game settings.
KG: Did you make any changes to the Year Zero engine for Tales from the Loop?
NH: Yes, some changes, for example: the Push rule works differently, there are no Talents in Tales from the Loop, and Conditions, Pride and Anchor don’t exist in Year Zero. Also the skills work slightly different, like Contact and Lead.
TH: The rules in Tales from the Loop are somewhat slimmed down, and have less focus on combat and gear. Instead, the focus is on character relations and mystery-solving.
KG: It’s interesting that instead of “adventures,” you call the game’s stories “mysteries.” Would you tell us about the thinking that went into that decision?
NH: I really do think labels matter. Different labels could make the players “enter” the game in different ways. For example: scenarios labelled “journeys” would make me, as a player, expect that my character would be travelling in game but also make an inner journey and be changed as a human being. That would make me more tolerant for some things in the game, like a slow start where the characters are farmers, because I would know that sooner or later we would find magic items and go on a journey to do heroic things and then come back to our village older and different.
Tales from the Loop is about solving mysteries, not about magic warriors or ninja agents who kill monsters. You play Kids living in a real world (sort of …) who are driven by their curiosity to leave their safe but boring everyday life to discover amazing things, unravel secrets and prevent catastrophes from happening.

KG: One of my favorite things about the game is the “Principles of the Loop.” Did you have any particular inspirations for these tenets? (I am especially enamored of #4, “…Kids Will Not Die.”)
NH: Using principles for building the game and giving guidelines to the players and the gamemaster is obviously inspired by the RPG Apocalypse World [6]. I formulated the game’s principles to be the backbone of a game about Kids solving mysteries, with the intention of building a foundation for stories that could take place in Stålenhag’s paintings.
When it comes to “Kids Will Not Die,” I wanted to eliminate the possibility of threatening the characters with death, in order to change the focus of the game and make other things more important. You can no longer throw in ninjas to try to get a scene interesting. Risks must be about something else, losing friendship, pride or not being able to help someone who needs it. I also think many players experience a relief that their character cannot be pulled away from them without them wanting it.
People do die in stories like Stranger Things or E.T. However, the main characters, the Kids, do not die. In this kind of stories it would feel out of place if the Kids got murdered or if the Kids started killing people themselves.
KG: For those of us who are new to Swedish RPGs: is it common to see dual-country coverage in a Swedish game like you did in Tales from the Loop (having both the Swedish and American settings in the book)?
TH: Hmm, actually I think I have never seen anything quite like that before. But it made perfect sense for this game.
NH: No, I haven’t seen any other Swedish game that has dual-country coverage.
KG: What about you, Matt? Is this the first RPG you’ve worked on that detailed settings in more than one country like this? Do you think we’ll see more of them?
MF: I’ve worked on lots of different games over the years, and I’ve seen this in things from Shadowrun to Vampire: The Masquerade to my own Brave New World RPG [7]. It only happens in games set in our own reality, of course. They often start in a single locale, but it’s often not long until the developers want to spread out a bit.
KG: Matt, you wrote the US setting chapter in the game. How did you get involved in Tales From the Loop?
MF: I’ve done a bit of work for various Swedish gaming companies over the years, including places like Target Games and Avalanche Studios. When Tomas announced on Facebook that they were looking for an American writer to tackle a chapter of the book, a mutual friend of ours—Rickard Antroia, who I’d met when he worked at Avalanche—put my name forward. Tomas and I started chatting, and I quickly signed on to the project.
TH: And it worked out amazingly well, Matt was great to work with!
KG: Matt, what kind of direction did you receive on how to create the game’s American content?
MF: I chatted with Tomas and Simon about what they were looking for. Simon had spent some time living in Nevada and had a very specific way for how he wanted the game to feel. It comes across so strongly in the artwork that it was simple to pick up that trail and follow it. 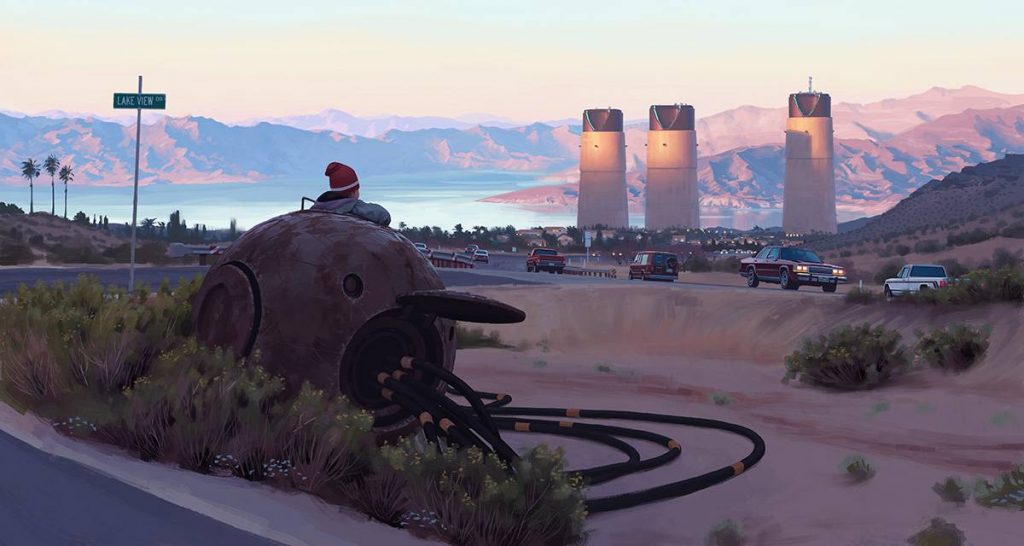 KG: Tomas, how is Modiphius involved? I’ve seen them referred to as a “co-publisher”?
TH: We have had a partnership with Modiphius since the launch of Mutant: Year Zero in 2014. Their role is primarily marketing and distribution, but we also share experiences and help each other out in lots of ways.
KG: Are you planning any further products for the game?
TH: Yes! The Mystery Compendium, with several more great Mysteries to play as well as a new Mystery Landscape, is coming in the fall. Next year, we will launch the “sister game” Things from the Flood, set in the same place and the same universe but in the 90s instead of the 80s. It will be a similar game, but with a darker tone.
KG: Ah, excellent. So, how different is the RPG gaming scene in Sweden as compared to the US?
NH: I don’t know the US scene so it’s hard for me to answer, but I think that in Sweden most people play a wide range of games and also different kinds of games like OSR and Story Now. It is not so much focus on D&D. Historically, the biggest games in Sweden have been based on BRP [8], making it the rules that people consider to be “standard.”
KG: Did YOU grow up in the 80s?
NH: Yes I did, and that’s one of the reasons I loved writing this game.
TH: Indeed I did! Born in 1974, I belong to the “golden age generation” of Swedish roleplayers.
MF: Yeah, I was born in 1968, so I was in 8th grade when the 80s started and graduated college when they ended. Those were definitely my formative years!
KG: What was the first RPG you played? And when was that?
TH: It was the very first edition of Mutant! I got it for my 11th birthday in 1985, the year after it was released. My dad bought it for me, but I don’t think he had any real idea of what it was–and certainly not of what he would set in motion!
NH: It was Drakar och Demoner [9] (Dragons and Demons), the biggest and most famous game in Sweden at that time. I was five or six years old and my mom was gamemaster. I played a dwarf and my big brother was an elf. We met a chimera outside a dungeon and my first in-character line was, “Gustaf, shoot it with your bow.” It could have been ’84 or ’85.
MF: I started out playing blue-book Dungeons & Dragons back when I was 12 or 13, the summer of 1981. I flat-out fell in love with it, and my friends and I played it almost every day all summer long. 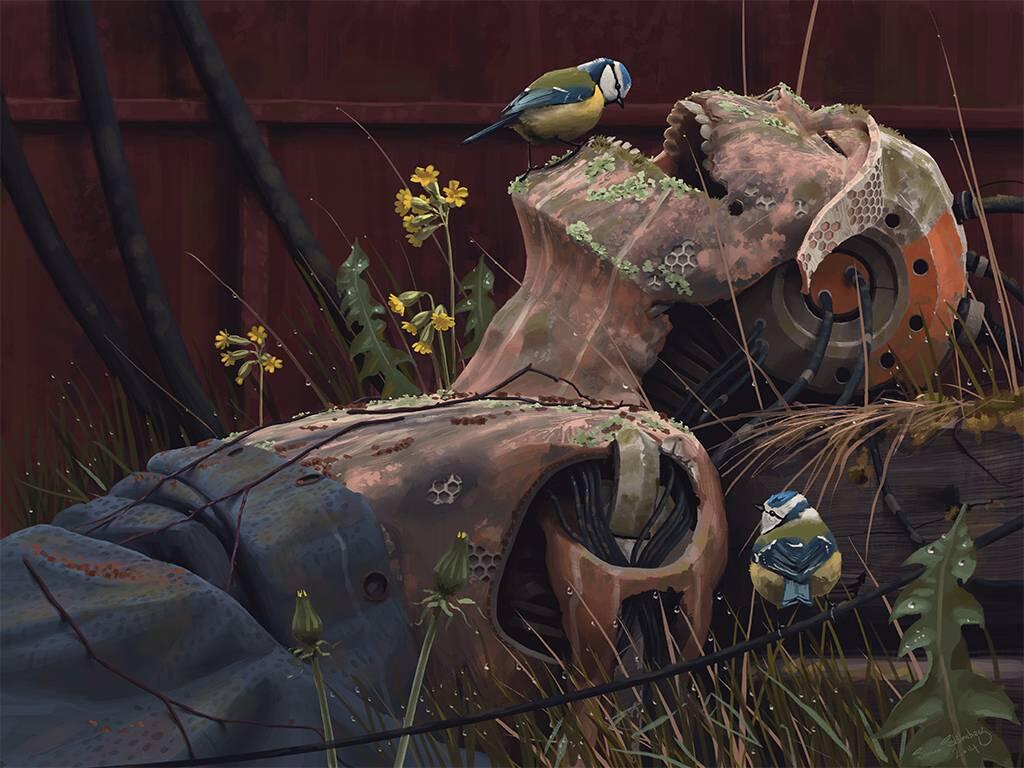 KG: The game lets each Kid choose an Iconic item. What would one of your own iconic items be in the 80s?
NH: Great question! I think it would be a comic book.
TH: Hmm, tricky one! Probably a “Big Jim [10]” action figure, I loved those when I was 8-10 years or so!
MF: It probably would have been a computer. I was also a computer geek back in those days and bought my first machine with my own money. It was one of the first-ever portable computers, a Kaypro-II, which was made of steel and weighed about 26 pounds.
KG: Any upcoming convention appearances you’d like to mention?
NH: No plans at the moment, I’m busy writing. 🙂
MF: I’ll be at Gen Con, the world’s largest tabletop games convention, August 17-20 in Indianapolis, Indiana. I’ve been going since 1982, so this will be my 36th Gen Con in a row. This marks the 50th time for the convention, too, so they’re going all out to celebrate!
TH: We hoped to make it to Gen Con, but in the end we had to miss it this year. Our games will be there though, in the Modiphius booth–and there will events for all of our games: Mutant: Year Zero, Coriolis and Tales from the Loop!
KG: Thank you, Matt, Nils, and Tomas!
1 Comment (Open | Close)

Amazing interview. I really want to go to a Swedish game convention now.