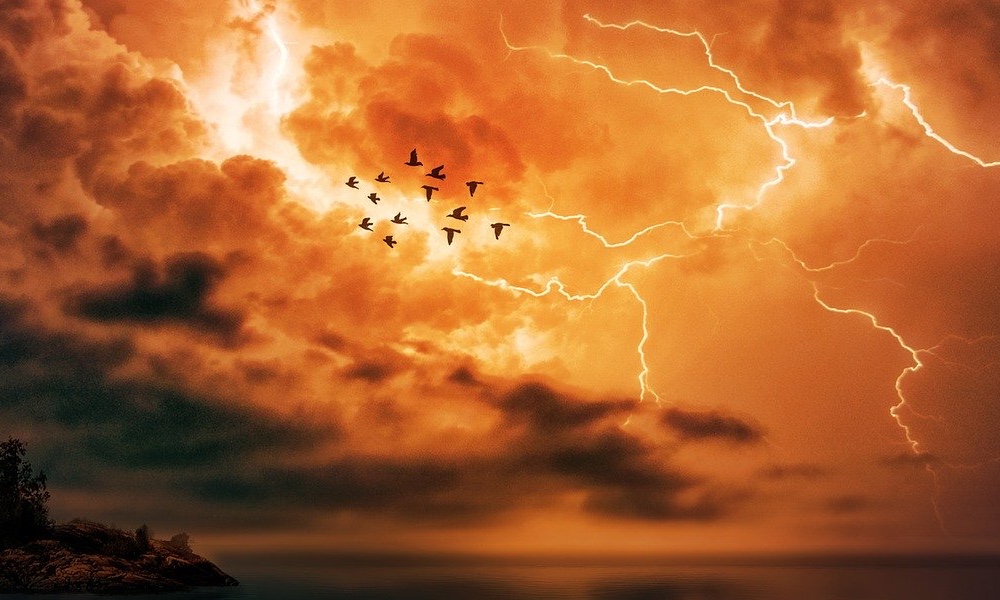 My Interesting Foods article from last month received some pretty good interactions on social media, with a few requests for more things along these lines. I’ve brainstormed a series of articles about how to use “micro details” to make your world pop and become more interesting to the players. This time around, I’m going to be talking about weather and how to amp it up.

The first, and I think most obvious, use of weather is to make it antagonistic, so that’s where I’m going to start. Then we’ll delve into other ideas and concepts. I tend to reserve dangerous or antagonistic weather for the mid-level (or higher) characters. Those low-level characters already have it rough enough without adding dexterity saves every round during an ice storm or by having them take 1d3 bludgeoning damage from a hailstorm or whatever. With that in mind, here are some ways to make weather more interesting.

Depending on your system, there are a wide variety of mechanical effects that can be applied to the PC’s activities. They basically boil down to three general concepts:

Damage is pretty clear. It causes owies or loss of hit points or whatever the mechanics are for getting the characters closer to death.

Impeding character actions is something that would potentially prevent a PC from acting. This could be slipping on ice, getting stuck in mud or deep water, and so on. I want to raise a caveat here: Anything that removes a character’s actions also removes the player from the game. Use this sparingly!

Lastly, the GM can increase the difficulty of character actions. This can be in the form of disadvantage rolls, increased target numbers, conditions (like deafened, blinded, restrained, and so on) on the character, applied negative aspects, and so on. Out of the three options, I like this one the best because it can be used with the widest variety of effects and allows imaginations to run wild with cool descriptions.

A friend of mine (Alasdair Stuart) has a saying that goes something along these lines: Horror is not the monster catching you, but seeing it approach and being unable to do anything about it. Think about that moment. In the lengthy series of Friday the 13th movies, the dread is the hapless victim stumbling and falling and attempting to escape Jason, not the actual fall of the machete.

Take this concept and apply it to weather. Amp up the stakes in your game by describing the ominous clouds on the horizon headed your direction. Put a gentle breeze in the face of the characters, and then change the description as the game time passes to increase the speed of the wind. As the wind whips up, it’s going to carry stinging sand or dirt with it. Then the rain begins to fall and it’s being driven by the wind, so it stings.

This puts tension into the game and also puts a ticking clock on the table. If the characters don’t get to safety (or their goal to rescue someone trapped in the increasingly poor weather) before things get worse, then Bad Things Happen to them.

I also want to point out the “looming” has negative connotation as a word. This could easily be phrased to “incoming” or “upcoming” weather to include a respite or break from horrible weather that’s causing problems. This is a way to give the PCs hope and inspiration that things could get better for them in the near future.

Speaking of giving the players a break, let’s talk about pleasant weather that maybe gives the PCs a boost in attitude or morale. This could be a positive aspect on the area, giving the players a bennie or an inspiration point, or any other number of mechanical effects, including increased healing.

A properly described warm and sunny day with fluffy clouds floating overhead and birds chirping in the distance can really calm the players and set their minds to more peaceful activities. This can be used to good effect as a reward for having made it through the Tunnels of Gor’Mak’Tik that run under Mount Mak’Gor’Tik and to the other side where the Peaceful Valley of Tik’Gor’Mak resides. This is typically where high fives around the table can occur.

Another thing a description of wonderful weather can do is to set up the players in a mode of relaxation and lax attention. This is where you can pull the rug out from under them with an ambush or some other nefarious GM plan. Don’t do this too often, though. If each of your “nice weather” descriptions are immediately followed by Bad Guys Attack, then the players will stop falling for your treacherous plans. Sometimes it pays to be nice to the PCs and let them have a good, relaxing time.

Of course, there are things in sci-fi and fantasy that can make the weather weird or just plain wrong as compared to what happens here on our regular, old Earth. Before I get into those, I want to share some strange weather-related things that have happened on Earth.

First: Raining mud. That’s right. Mud can fall from the sky. It’s something that happens in my home town back in west Texas on a regular basis during the spring. High winds would precede a nasty rain storm. These winds would pick up tons of dirt and lift it high into the sky for the rain to fall through. The water would mix with the dirt to create mud that fell from the sky. Now you know why people in the near-desert environment of west Texas keep ice scrapers in their cars during the spring season.

Second: Raining critters. I’ve never experienced this, but I’ve seen reliable news reports of frogs and spiders falling from the sky. The spiders I can understand because they are lightweight and some of them build webbing/nests in trees where high winds can pick them up and throw them around. Frogs falling from the sky are a little more scary to me because if one of them hit me… ouch!

Now let’s talk fantasy and magic for a brief moment. Put your mind to the spells that can control weather, wind, water, and so on. What if two dueling wizards (or druids or weather clerics) were battling it out on the amount of rainfall and wind an area was supposed to receive? What if your PCs are right in the midst of the contested area? What, if anything, are the PCs going to do about the wild and unpredictable weather patterns? What are the common-folk doing and how is the craziness effecting them? Ask more questions along these lines, and you’ll be able to find some interesting things to do with magically-controlled weather.

Jumping to sci-fi, I have to link to a news article where scientists are pretty sure that there is “iron rain” on an exoplanet. Here’s the article. Think about that for a moment. What kind of preparations would the PCs need to do in order to make planetfall in an environment like that? The article also mentions that the planet is tidally locked, which means there are potentially two major weather patterns (the side that always faces the sun and the side that doesn’t) along with a band where the two sides meet. This could entirely mean that the “dark side” of the planet could be safe to trek around on, but with disastrous consequences if the party approaches the dividing band or the “light side” too closely.

I hope this article has given you something to mentally chew on as far as making weather a more integral part of your game life. I have quite a few more ideas on how to make things interesting, but if you have a specific topic you want me to cover along these lines, feel free to hit me up on social media or in the comments below.