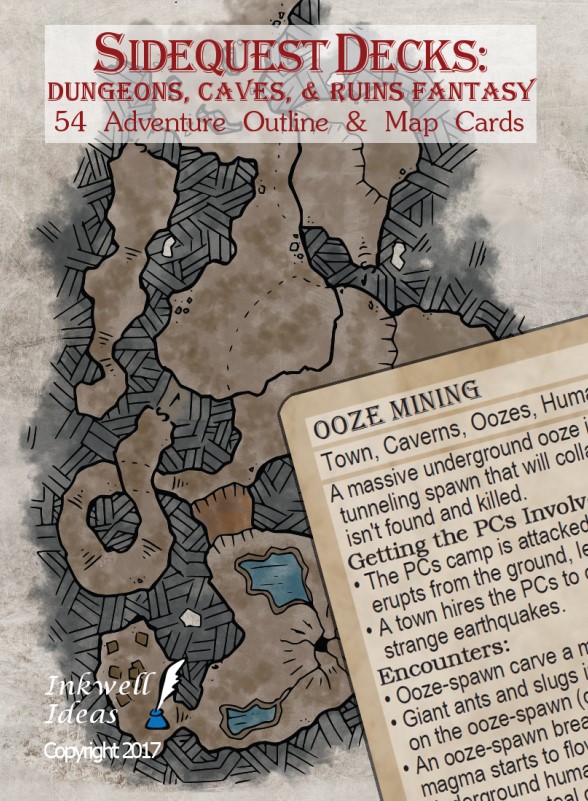 The people at Inkwell Ideas have been producing Sidequest Decks, decks that have an inspirational map on one side, with a sketched-out adventure outline on the back of the card. While these cards lean on particular genres, they don’t have any specific game mechanics included in the outline. Inkwell Ideas has a Kickstarter coming up to fund additional Sidequest Decks, and to give people an idea of what is included, they sent me these decks to peruse.

I didn’t previously own any of the Inkwell Ideas Sidequest Decks, but I have picked up several of their Creature Decks and NPC Portrait Decks, so I have made multiple purchases in the past. I’m interested in digging into this concept.

The Sidequest Decks that I was sent include the following:

While I wasn’t sent a copy of these decks, the following other Sidequest Decks are available from Inkwell Ideas:

In general, these decks are presenting an outline that a game facilitator can use to run a session and presenting a related map that can be used to help plot that adventure. The map does not include any key, which can be significant depending on the outline being presented.

One face is a map, and on the other face is text that has the following sections:

The keywords serve different functions in different decks. Because of what may come up in various scenarios, the keywords can be a content warning. If you have cards that say “torture” or “drug use,” that’s going to be a good warning sign if you have already established some lines and veils for your campaign.

For the TPK deck, the keywords help to establish what genres might be at play, and if the characters have the potential to come back immediately or after an extended period of time. This can potentially help you sort through how you want to move forward after a TPK in a science fiction game, versus a modern horror game, versus a fantasy game.

This deck is one of the earliest Sidequest Decks produced by Inkwell Ideas. This deck is playing with a lot of tropes that are common in action fantasy games. The assumed creatures at play often reference the kind of creatures you are going to find in D&D-style games, but with no stats involved, these cards could still be used with Fantasy AGE, Pathfinder, or any other epic fantasy with a wide range of monsters and ubiquitous supernatural elements.

There are a few of these cards that have simple “non-mechanical” puzzles on them, such as a room that needs to be turned a certain way to access other parts of the dungeon. There are a few recurring themes that make sense for this genre of fantasy, including goblins, or demons and their cults or summoners.

Some of the maps on the cards have some obvious placements based on the outline presented, even without a map key, such as a clear entrance and a major, central room for a climactic encounter to occur. In some cases, however, it’s hard to map the outline of the adventure to the map presented on the card.

I was a little uncomfortable with some of the “child” elements of the adventures. There are several sections where children are put in danger as a hook, and where “monster” children are used as a point of moral contention, and I’m never really a fan of the “is it okay to kill a child” as a plot point.

With all of that said, I really like being creative in a confined space, and when I run published adventures, I tend to customize the monsters in those encounters before I run them, or at least look through my wide range of monster manuals to make sure I want to use the default monsters. I also really like the follow-up adventure ideas to help spark ideas for how to connect these outlines to wider campaigns. 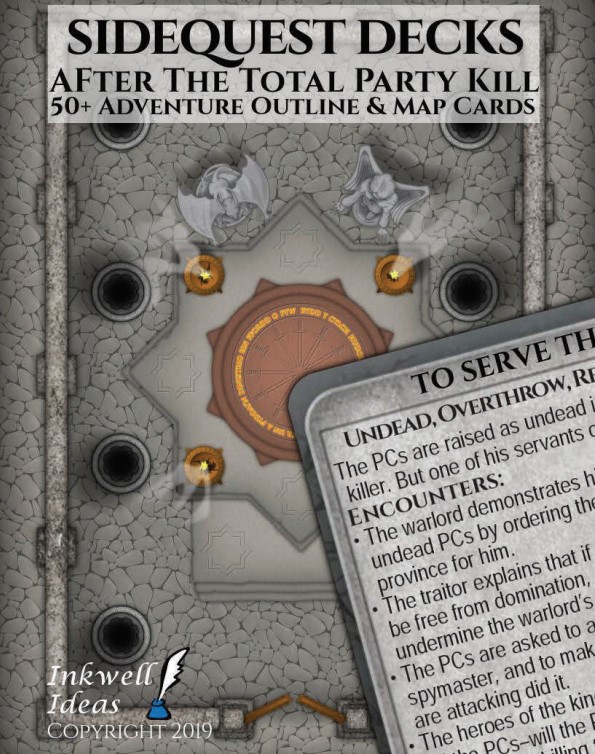 This deck goes a different route than the previous deck. Instead of being focused on one genre of play, this one can be used with a few different genres, although it leans heavily on fantasy for most of the adventure ideas. The idea behind this deck is that if your player characters all die before they finish the campaign, you can insert one of the sidequests into the campaign and eventually reintroduce the characters into the game to finish what they started. Adding in the extra hoops to jump through makes the TPK meaningful as a story point, while not becoming a hard stop for a campaign where the players have developed significant investment.

The keywords at the top of the cards give you some hints as to what kind of “return” the player characters will be making, what genre works best with that “return,” and how soon player characters can return to how the campaign was progressing before the unfortunate cessation of breathing might have happened. For example, a card might have keywords that indicate the characters are cloned, the campaign will advance significantly while they are gone, and that they might need to perform an extended task before returning to their previous goals.

Several of the fantasy-themed cards deal with some mythological afterlives and how characters might return to life based on those mythological elements. For example, there are cards that layout returning from Olympian Hades, Norse Hel, or the Heliopolis afterlife. Most of these involve going on an adventure to interact with elements of those afterlives before finding a means to slip back into the Prime Material plane.

Other, broader fantasy afterlife cards involve gods with a specific theme requesting certain things from the player characters. Additionally, many of the cards involve being summoned by necromancers either as ghosts or zombies, with the ability to return to life at a certain point, or potentially inhabit new bodies.

Several of the afterlife “returns” are multi-genre solutions, such as facing a trial in a courtroom, appearing in a metaphysical video arcade, appearing in a retirement home afterlife, or living a parallel life in a shadow world.

I love this concept for a deck of inspirational adventure concepts. This is probably my favorite of all the decks I looked at for this article. I’ve always been someone that likes to play with roleplaying the afterlife when a character dies in a campaign, so this is cogent to my interests. 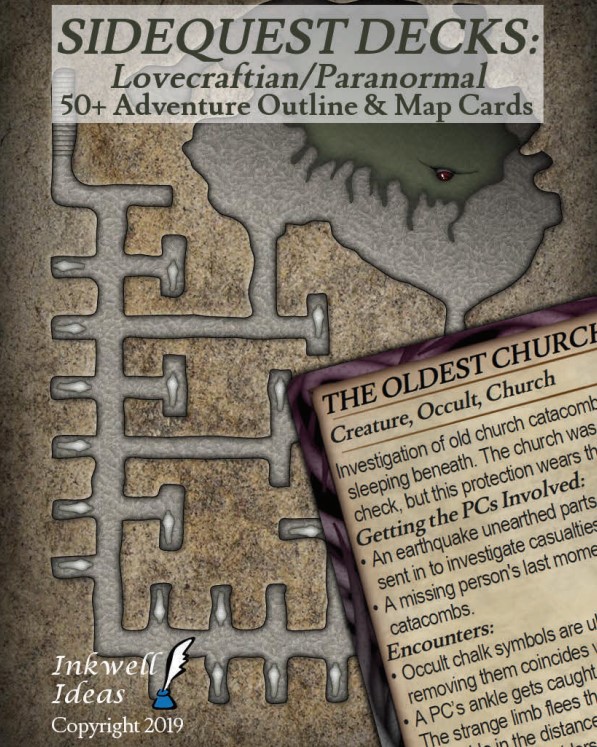 This deck has a more constrained focus than the Dungeons, Caverns, & Ruins Fantasy deck, but still crosses over a lot of different horror or supernatural investigation tropes. Many of these scenarios could be used with different games, changing the consequences of interacting with the supernatural to change the narrower band of some horror investigation genres.

The maps that are used for this deck are much more modern appearing than the Dungeon, Caverns, & Ruins deck. There are several city blocks, old moody houses, and neighborhood maps printed on these cards for inspiration.

A lot of these outlines, to me, felt very much like the outline for an X-Files episode. I think this deck would be especially useful for people playing Call of Cthulhu, Delta Green, or Monster of the Week. In fact, several of the player hooks have a hook for “you have a personal stake in this mystery,” with another hook being more along the lines of “you have been assigned to follow up on X.”

I think the keywords for this one really do need to be used for content warnings, with the number of them that include elements like drug use or mental health. While those are probably session zero discussions for Call of Cthulhu or Delta Green games (or they should be), some of these might sideswipe a game of Monster of the Week if you haven’t already discussed heavier topics that might come up in supernatural horror.

One interesting, and thematically appropriate, element of these outlines is that it feels more like these outlines are “resolved,” but don’t always provide an answer for what just happened, unless you delve into the follow-up adventure ideas. I personally like this element of the outlines, because one of the problems I often run into when it comes to more “cosmic horror” based stories, is resolving too much of the mystery too quickly, and separating the immediate mystery from the long-term mystery.

The maps that appear on these cards can range from immediately useful to inspirational artwork, so it’s probably important to keep that in mind. Not every card is going to have a map that immediately lends itself to a one-on-one assignment of encounters, but some of them do.

Â Because of the number of ideas that these cards spurred in me for adventures, and because I like the idea of providing these outlines for other genres, I am interested in seeing how this line of decks develops in the future.Â
If you are a game facilitator that enjoys creating within a confined space, I think these products will appeal to you. The outlines are enough to keep you moving forward for a night of play but have enough room to add your own traps, puzzles, monsters, or mechanical widgets that I feel they can make for a comfortable backboard to bounce ideas against.

While I liked the fantasy-themed decks, I can see some broad utility in the Lovecraftian/Supernatural and After the TPK decks as RPG products that are providing a resource that isn’t overserved with existing game products.

I am tempted to pick up some of the other decks after looking after the ones I was sent. I am especially interested in the broader genre decks, like science fantasy and science fiction (and who am I kidding, I’m really interested in the High Seas, Pirates, and Ports deck because I am who I am). Because of the number of ideas that these cards spurred in me for adventures, and because I like the idea of providing these outlines for other genres, I am interested in seeing how this line of decks develops in the future.

What are some of your favorite supplements for spurring ideas to flesh out your own adventures? Are those supplements game-specific, or multi-genre products? How much luck have you and in transferring spur-of-the-moment, one-night adventures into the larger narrative of a campaign? We want to hear from you in the comments below!