Indexes: Who Loves Them?

I know that I’m a little out of the loop on a lot of things. When did we as roleplayers sign on to loving indexes? I don’t hate indexes, let me put that out there right away. (Put down those pitchforks!) I love them, particularly in cookbooks. But I rarely use an index, and don’t often miss it when it’s absent. 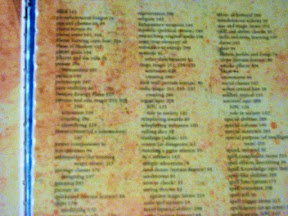 On the other hand, I know a lot of reviewers make a big deal about indexes: Martin’s reviews here on the Stew let you know whether the index is an embarrassment or not. So do many reviews on rpg.net.

A few years ago, my D&D3.5 DMG lost a few pages at the end of the book. Pages 311 to 318 went missing– for a while I kept them tucked in the book, loose, but eventually they dropped out of the bag. I doubt I’d ever have noticed if I had only lost the indexes, but I lost a few pages of glossary and definitions, which matters to me a lot more.

A popular early product for 4e was improved indexes. The Gamer Dome hit 2,000 downloads and garnered a lot of praise for producing a more complete index that WotC supplied for their Player’s Handbook.

On the FATE mailing list, I remember (but can’t find) a question that was asked about the index at the back of Spirit of the Century and what lessons they had learned. The Evil Hat guys stepped right up and admitted that their tiered index structure hadn’t quite panned out and that they’d return to flatter indexing for their upcoming products. If you flip to the index at the back of Spirit of the Century, you will notice that it’s set up more like a recipe book, in groups. “One Hand on the Wheel” is listed under Stunts/Details. The drawback is that if you don’t know that it’s a stunt, you probably don’t know to look it up under Stunts… and it’s not listed separately alphabetically, so you might spend as much time hunting though the index as you would flipping through the book. To me, it’s not a big problem: but that it’s important enough to ask about fascinates me.

Aces and Eights has a book index on the website, rather than in the book. I don’t mind the absence of an index, but have no idea who a downloaded index is supposed to serve. I suppose index lovers could download and print it, then add it to their binder or something. Does providing an index online and allowing users to download it mitigate the lack of an index? It only serves those who care enough about indexes to hunt one down. Is an index that you have to download good enough for index lovers?

So, help me figure out what a card carrying RPG lover is supposed to think. Is there a widespread love of indexes and I’m off in the fringes? Does your heart beat more rapidly when you see a meaty index? What do you look for in an index, and how many pages can a book have before an index is needed at all? Or are you one of the people who rarely notices an index at all?

30 Responses to Indexes: Who Loves Them?