Inclusion and the Game Retail Experience 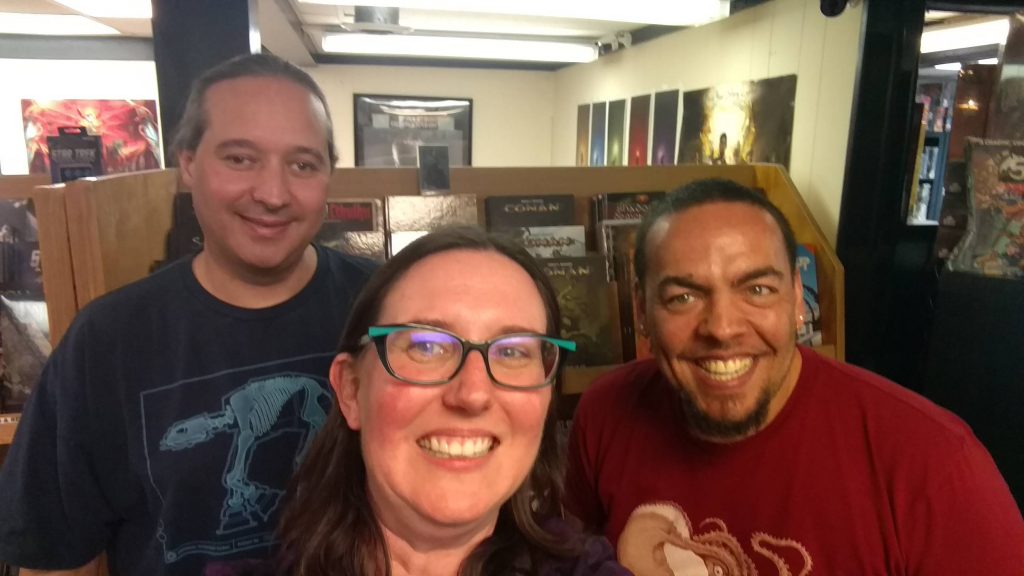 Today’s Gnome Stew article is co-authored by Camdon Wright and Wendelyn Reischl. Both are role players with experience spanning multiple decades. Wendelyn and Camdon are game masters, game creators, and well known participants in the gaming community. This article is co-written because they shared the refreshing experience at the heart of the matter. Headings below designate which author is speaking as each provides their perspective and the prior context that made their experience so powerful.

As a gamer of multiple decades I’ve been to many games stores in the United States, Canada, and Europe. I know a lot of gamers and I believe I have had unusually positive experiences at local stores compared to other gamer woman. In Colorado, many people know me by reputation, online friendship, or personal connection. I’ve worked hard to build the community and I’m well respected among gamers, so I think I’m having the best possible experience a female retail client would have. Even so, the interactions I am greeted with are tepid. Is that really it?

From my perspective, retailers (including game stores and game cafes) are the two consistent touch points for the gaming community. They are where the community exists physically on a continuing basis. I love my home games and conventions but those are bounded in time, they coalesce and disperse in a matter of hours or days. They aren’t a continuously available touch point for people trying to learn more about gaming and have their first in-person interactions. That makes game stores and cafes integral to expanding the game community and letting people know we gamers exist. The abundance of brick and mortar spaces also clearly proves that gaming is a thriving and acceptable hobby.

A game store in Wisconsin comes immediately to mind. I went there with my mother-in-law intent on picking something up after a convention and the one employee in the empty store ignored us. When I tried to engage him, I learned he was the manager, yet he continued to brush us off until male relatives were mentioned – then he perked up to offer game suggestions. That’s a form of gate-keeping that I find incredibly discouraging because people can get turned off from gaming before they ever buy their first product. I think this is done out of neglect or thoughtlessness and not malice, but the intention isn’t the point.

That tepid interaction is a complete mismatch to what I think game retailers should hammer home as the most important aspect of working in a customer facing game job. The number one goal can be to make everyone feel included, that by simply being present in the store the customer is welcomed as a gamer – one of us. Customers are self-selecting, opting-in as gamers or at minimum game curious. Retail workers can validate that. Pair inclusion with an enthusiastic knowledge of games and that’s the perfect employee, one that will build a store’s customer base and expand the game community as a whole.

The reason I’m thinking about this is because I just had the best game retailer experience of my life. I was on a 3,500 mile road trip to a convention and randomly stopped in at Game Masters game store in Pittsburgh, PA. Game Masters has been owned and operated by Phil for 22 years. He’s a gregarious man with a great smile, a huge depth of game knowledge, and a world-class indie RPG selection. He’s also blind.

So when a woman and a tattooed person of color walked into his store, he had no preconceived expectations about us or our interests. He perceived us as human beings and gamers. He perceived our connections to one another and not our differences. It was powerful. It was moving. It was validating and uplifting in a way I have not experienced at a game retailer in a long time. Not only did Phil engage us as customers, but when we started talking about the gaming industry together he excitedly asked if we were involved and never hesitated or questioned our assertions. Once more, hello validation and goodbye imposter syndrome — direct from a retailer. It was as natural as breathing when he said he’d be carrying my product (Wrath & Glory) as he assigned me a degree of ownership in it. Wow. Did I mention he and I had never met before?

With a huge smile Phil recommended going to the other game stores in the area, but we couldn’t bring ourselves to do it. We knew no matter how good they were, it wouldn’t be the same. We left Game Masters absolutely radiating happiness and manufacturing ideas that would get us back to Pittsburgh and to Phil’s store even before we left the state. Game Masters isn’t the biggest, the brightest, or the flashiest game store I’ve been to. But it was by far the friendliest, most welcoming, and BEST experience. I attribute all of that to Phil as a person.

I’ve been gaming since the 70’s but I haven’t spent much time in game stores. Part of that was a lack of options due to living in Alaska, but a bigger part was that I never felt welcomed by the community, in fact I was openly distrusted and scrutinized. Long before the tattoos and love of independent games, I was just a young nerd looking to play some D&D or Heroes Unlimited. Even now I consciously select to go to the store where people know me or the one where they just don’t care who you are (so much so that it can be hard to find someone to ring up your transaction). It is an unsettling and marginalizing experience to be both scrutinized and ignored simultaneously. You are being watched be people with an unwillingness to help you. I have been followed around stores by employees who were there to make sure that I didn’t steal anything since I was in grade school. I actually asked the first person that I notice doing it, I was in 3rd grade at the time, why they were going everywhere I went. They made an excuse and my mom explained the reality of the situation when we got home: it was because they saw the color of my skin and judged me for it.

When I was 17, I went into the local game store, with money I earned working a summer job, excited to pick up some books and check the bulletin board for anyone that might be looking for a game. It was a sobering reality when the owner pointed to me and had one of the folks working there follow me around. Loving games and comics wasn’t enough to get past my brown skin. I knew this wasn’t a place for me. How many potential storytellers, players, and writers have been chanced out of the hobby by mundane interactions like this? How sad is it that low wage workers on up to managers and store owners have destroyed their own potential with their distrust and gate keeping? How many have we lost to ugliness much worse than this? I still don’t like game stores because positive experiences are, for me, so rare.

I was about 40 before I found a store that I felt safe and welcome in. Although it’s gone now, Mythplaced Treasures will always live in my heart as a safe and welcoming space where I got to take my own son so he could learn to play the TTRPGs that I love in a community setting. He got a chance to learn to share a gaming table with strangers in a place that we both felt safe.
When Wendelyn and I stepped into Game Master’s and were so warmly welcomed I was completely caught off guard. I knew that Phil had a vision impairment from the reviews of the store I had read before we stopped by. Phil’s mom was also there and she asked after about 10 minutes of chatting, “You know he’s blind, right?”

Phil has a lot to teach the retail gaming industry about acceptance, knowledge of your products, and building the future customer base of gaming.

There are numerous ways to buy game products in the modern day, from giant online stores to crowdfunding campaigns to direct from the creators themselves. The primary competitive advantage of a game store is the sense of inclusiveness and community. That is not defined by the number of tables available for play. It is an intangible quality that is brought by the people who represent the store. If retailers ignore or distrust their customers there are plenty of ways people can purchase the same things with a dispassionate, comfortingly neutral experience. All in all, I’d rather have a human experience and buy from the Phil’s of the world. How about you?

If you are a store employee, manager, or owner and read this and wonder, has this happened in my store? It has. No one is perfect. This is your opportunity to start (or renew) a discussion with your staff to affirm that everyone who walks in your store is a gamer. Send your co-workers this article and talk about it. Everyone who walks though your doors deserves respect and inclusion. The more people feel it the more likely they are to buy from you and keep coming back. The best part, you can create new gamers just by being friendly.

Collaborate with your team to figure out how to make sure all people are welcome at your store each and every day.Â  Let your community know publicly that this is your goal and ask them to come to you if they don’t feel enthusiastically welcomed.

Note, there was never enough information in this article to pinpoint a single store. I have revised to ensure no one incorrectly believes they know which store I was referring to.

6 Responses to Inclusion and the Game Retail Experience