IN THEORY: The GM Levels Up 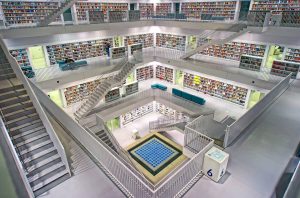 What player doesn’t like to “level up”? Their characters get improved abilities, and perhaps new ones as well. They can now face stronger adversaries and overcome greater challenges. It’s one of the true joys of the game.

Gamemasters (GM’s) level up as well, though not in a formal fashion. With experience, most GM’s will hone their skills and even develop new ones. In this article, we’ll look at six theoretical GM levels. Obviously not every GM progresses in this exact order. However, it may provide a framework for thinking about how we develop as GM’s. It might even suggest new areas to venture into. Think of it as sort of a Bloom’s Taxonomy for gamemastering.

LEVEL 1: SURVIVAL
We all started here. When we first decide to run a game, we focus on knowing the rules and the adventure well enough to make it through a session or two. Making it through by the skin of your teeth is considered a major success. Often at this level, GM’s run published adventures or sample adventures provided with the game book.

This level should not be denigrated. We all have to start somewhere. If we switch games or systems, we could do worse than run published adventures. They help us better understand the rules and the setting, and can still provide memorable sessions. In a way, we never actually leave level one, we only build on top of it.

LEVEL 2: WRITE YOUR OWN ADVENTURE
Most GM’s will want to design their own adventures at some point. LEVEL 2 is a great place to learn the system and how rules interact with one another. We may even realize that writing a good session is harder than we thought. This is a level to make mistakes and learn from them. No matter how carefully you plan things out, your players will find a way around them and push your improvisation skills forward.

LEVEL 3: STORYTELLING
Once a GM is comfortable running and writing sessions, they can focus more on the storytelling aspects. They learn to be vivid in their descriptions, and more dramatic in presenting non-player characters (NPC’s). This may be the level where GM’s start to speak in character. A skilled LEVEL 3 GM learns how to do all this without taking anything away from the players. Descriptions can be dramatic, but not too long. NPC’s shouldn’t hog the spotlight, only provide chances for player characters (PC’s) to ask questions and get answers.

If you’ve played with a strong LEVEL 3 GM, you remember their sessions well.

LEVEL 4: MORE CHOICES, NEW CHALLENGES
At this level, a GM starts to build more choices into their sessions. For example, instead of just suggesting that players talk to the barkeep, they might design four or five patrons. Then players can talk to whomever they’d like. Adventure outlines become less linear. There may be several ways to enter a dungeon or encounter area and the GM can handle that just fine. Want to climb in through the second story instead of going in the front door? No problem. (I’ll just switch the floorplans!)

At this level, GM’s will challenge themselves to try different types of stories. For example, they may try to bring a mystery TV show feel to a fantasy game. They may take PC’s to alternate worlds, or mix a little science fiction into their fantasy games (or vice versa).

LEVEL 5: CAMPAIGN WEAVING
Not every gaming situation requires a tightly woven, epic campaign. However, it is something most GM’s will want to try at some point. A strong campaign can provide life-long memories for both players and GM’s.

At this level, GM’s start planning multiple sessions, thinking ahead to an epic finale. Sessions don’t have to follow that plan rigidly, however it does provide a general road map. GM’s will begin to drop hints about quests to come. They’ll subtly introduce villains who will plague the PC’s down the road. They may even adjust published adventures to support their ongoing storyline.

LEVEL 6: MEANING
At this level, GM’s try to bring something deeper to the table. Now, don’t get scared thinking that it has to be “War and Peace.” One way to add meaning is to design adventures that support the PC’s goals or touch upon their backstories. These types of adventures provide deep connections for individual players, and also the ones who support them in reaching their goals. Rotating the spotlight between PC’s helps all players feel included. In fact, a few sessions based on each PC can provide an excellent campaign.

You might even try to include themes in your sessions to give them meaning. Perhaps PC’s work to defeat giants who are enslaving dwarves. This can touch upon the theme of the value of freedom. Literary dabbling can be tricky. We aren’t writing novels and players often make unexpected choices. However, that doesn’t mean that we shouldn’t try, gently. For myself, this is an area I’d like to develop more.

CONCLUDING THOUGHTS
As GM’s, we don’t develop in a linear, step-wise fashion. It may be more like a buffet. Sure, we all start out at one end of the table, Level 1. However, we may skip ahead or go back for seconds, and probably will do this for our entire gaming career. The idea of levels does provide a way to think about where we’d like to go as GM’s. You may rank things differently or include different elements. But you probably still have a path in your mind, a destination you’d like to reach. I’m not there yet either, and that’s the fun of it.

How about you? What levels might you wedge in between the ones suggested here? What more advanced levels would you add? Tell us below.

9 Responses to IN THEORY: The GM Levels Up