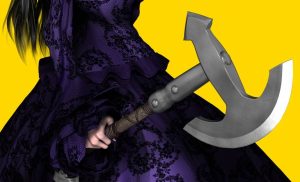 There are numerous ways to determine damage in a roleplaying game. It may depend on the weapon (or spell) used, the skill of the combatant, and/or the roll of the dice. In this article, we’ll look at four ways of calculating damage. It’s not meant to be a master’s thesis on the topic. Rather, it’s an overview of some major methods. This topic should prove useful for those gamemasters (GM’s) who wish to homebrew their own game or hack published systems. For others, it will hopefully provide food for thought and fodder for discussion.

Here are some options:

TRADITIONAL ROLLS
In many venerable systems, damage is rolled separately from “to hit” rolls. These are very familiar to most players, so they are a good option for convention games. There are no unique mechanisms to explain. They provide an added tension to each combat round. You’re never sure if you’ve landed a killing blow or not.

However, they do increase the number of overall dice rolls during combat. This may bog things down during large battles. Also, the additional roll can create the situation where you hit well, but do little damage. I’m sure most of us remember a time when we hit with a 20, but only did 1 point of damage. Some systems suggest dealing maximum damage on a “critical hit” to avoid this extreme situation.

STATIC DAMAGE
In this mechanism, weapons do a predetermined number of damage points. For example, a sword might do 8 points while a dagger only does 4. This makes combat speedy, and damage easy to determine. For a one-shot or convention game, it might be just the thing. However, it may be a bit TOO simple and doesn’t provide any variability or tension. It also doesn’t account for any degree of success. Barely hitting an opponent does the same damage as a critical hit.

DEGREE OF SUCCESS DAMAGE
In this setup, your “to hit” roll also determines your damage. If you hit well, you do a lot of damage, if you hit poorly, you do less. It could be a static scale. For example, a full hit might do 10 points of damage, while a partial hit only does 5. It could also be a bonus added to a traditional damage dice roll. This system eliminates cases in which a player rolls well to hit, but then rolls poorly for damage.

However, this is a bit more complicated, and may require a little math to determine the degree of success. I use this system for my homebrew game and find a chart helps a great deal.

STORY DAMAGE
All three methods discussed so far imply a traditional hit point mechanic. However, some systems take a different, more story-based approach. In those systems, damage affects your ability to perform other tasks. For example, if you take a hit in a dice pool system (such as RISUS), you lose one die on future rolls. When you are out of dice, you are down for that combat. A penalty to a dice roll is another version of this mechanic. For example, you might suffer a -2 on the first hit, then a -4 on the second hit, and so on. This system is more cinematic than hit point systems, with the hero getting worn down because of combat. Also, there are no hit points to keep track of, perhaps streamlining combat.

This type of system may be a hard-sell for players who prefer more traditional games. There isn’t generally an easy way to differentiate between weapons. A dagger hit works about the same as a phaser hit, and you just have to accept that as part of the game. Finally, some call this the “Death Spiral” when it becomes difficult to succeed at any action as you lose dice or modifiers.

CONCLUDING THOUGHTS
The type of damage system you select may depend on the type of game you’d like to run. What might work for a long traditional campaign might not be necessary for a light-hearted one shot. You’ll also want to consider the level of complexity that you are comfortable using during play. You don’t want to tie the albatross (or cumbersome system) around your own neck.

What method works best for your game? What other methods of calculating damage can you suggest? Let us know below.

2 Responses to IN THEORY: CALCULATING DAMAGE