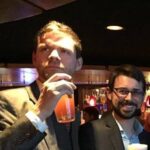 Today’s guest article is by Patrick Regan, a screenwriter living in Los Angeles, who learned how to write for TV by GMing after a college roommate made the mistake of showing him Dungeons and Dragons. He blogs at www.weareindependentfilm.com, podcasts at Cinema Excelsior, and can be generally found on Facebook and Twitter @underwoodfive. Thanks, Patrick! –Martin

The Hook breathes heavily as he walks through the dark, although it sounds like it’s coming from all around you. Molly, you’re badly hurt, four lethal damage, one agg, and are hiding in a cupboard in an abandoned ranger station, gripping the Hook’s old weapon, a butcher cleaver. The only thing that can kill it.

Rhona, you’re also hurt, but not as bad, hiding under a table. You shiver as the Hook’s boots clomp next to you, and you can see the gleam of his namesake weapon in your mind.

Jack, you’re at the top of a cliff, looking down at the ranger station. You’ve got three lethal and a bashing from a fight with the Hook before it turned, for no reason at all, and leapt down the mountain. Your gun is effectively useless. You might as well have been shouting insults at it.

Terry, your wounds are knitting up from the Goblin fruit you ate and you’re barreling through the woods at breakneck pace, but you’ve still got an Arm Wrack tilt until the fruit finishes healing. And there’s an 11 foot deep trench between you and the station.

What do you do?

That’s how I began my most recent session of Changeling: the Lost. For the record, I really have no idea how the characters got to be in the specific place they were in when we opened up, and neither do the players. We had ended the last session with them recovering the butcher cleaver, the only weakness of the Hook. I chose to fast forward straight through to the fight. In media res, in other words.

To put on my over-educated hat, in media res is latin for: “In the Midst of Things,” and is a storytelling device that basically tosses the audience right into the middle of the action without any set-up to explain what’s going on or how they got there.

You can see it the most often in television, where it’s assumed repeat viewers already know, for example, that Oliver Queen is the Green Arrow and he fights crime with a bow and arrow. Your average Arrow episode starts with Oliver and company (ha) in the midst of foiling some crime that will end up thematically relating to the main problem of the episode.

I come here today to encourage you to take that tactic and apply it to your own games.

With the exception of games that had to be left off in the middle of things (who among us hasn’t taken photos of a miniature board?), pretty much every game session I’ve been playing in has started one of two ways:

There’s nothing inherently wrong with either of these options. In fact, they help let your players know what kind of session you’re running, be it an open-ended sandbox or mission based game play. And frequently those can change — the Chronicle from the example above is fairly open-ended, but given where the last session ended (we got the knife that kills the monster!), I had a fairly good idea what the next step was going to be (kill the monster!).

In media res lets us cut through the clutter and the wheel spinning that often accompanies a starting session and cuts straight to the action. The technique is applied differently to both ways of starting, though, so let’s examine them one at a time.

Instead, use this as way of helping immersion and recognizing the fact that at any given time, almost nobody is doing nothing, which is often a weakness of the leading question. It always feels like the character just popped into existence seconds ago, and hasn’t really been doing anything until we checked in on them.

Don’t think of this as forcing an inciting incident on the party, it’s more about setting a mood and tone for the game as a whole. Superheroes might be talking to the press after foiling a bank robbery, or even at the tail end of foiling it (no need for rolls, you know they’re going to succeed). Vampire, with its themes of alienation from humanity, might start with the character having to interact with their human facades in a way that reminds them of what they were.

Don’t forget about the fun of domesticity, too. Especially if your characters all live together, someone has to clean, cook, and buy groceries. You’d be surprised what kinds of stories can come up when a vegetarian and a werewolf try to go food shopping together.

The general aim when using this technique with sandboxes is to make the breaks between sessions feel seamless. This is a dynamic world that changes with the players’ actions, and their characters are dynamic people. You want your players to believe that, as opposed to feeling like they’ve logged into the WoW accounts.

Where in media res really shines, though, is when you’re dealing with the inciting incident, because in media res lets you cut through a lot of the clutter and dreck that can accumulate before you get to the actual good parts.

Since it’s the most popular heavy mission-style based game that I know of, I’m going to use Shadowrun as an example. Most Shadowrun games follow a traditional narrative:

Obviously, there are twists and turns aplenty to be found in this narrative, and it can potentially last for several sessions (particularly if you’ve got a team of severe over-planners). In general, though, this is how Shadowrun games are designed to go. It’s baked into the title — you’re a team of mercenary Shadowrunners in a fantasy cyberpunk future.

But look at that narrative. If you’ve been playing for a while, there’s a LOT of places in there that you can probably skip entirely unless you’re actively performing some kind of twist. If the meet with the Mr. Johnson is going to go exactly the same as every other meet with the Mr. Johnson, it’s a meeting you can skip. Is this a Mr. Johnson they’re ever going to meet again? Is anything different going to happen if it’s someone they already know? If the answer is no, consider starting with your characters casing the joint and making their plans.

If you’re feeling a little sadistic (and have players that don’t mind this sort of thing), start halfway through the plan, when everything inevitably goes to hell in a hand basket. The general theory, though, is bypass the stuff that simply doesn’t matter, is boring, or is rote.

On the other hand, if the team is suddenly being brought up the Saeder-Krupp headquarters for some one-on-one time with Lofwyr himself? That might deserve some special attention, but even then, don’t start with getting the message, then driving to the building, then getting their drive-on passes, etc.

Start in the middle of it. Start in the plush elevator raising them high, high, higher over the Berlin metroplex. Start them waiting in the a plush room that’s nicer than their apartments, having been there for over an hour (because the Great Dragon sees you when it’s damn well convenient for him).

One of my favorite things to do with this method is set a mood. Like my Hook example up above, I started in the middle of the fight for two reasons. The first was avoiding repetition: the characters had researched and beaten a dream echo of the Hook to get the butcher cleaver, and I didn’t see any reason to repeat a fight they had essentially already had.

Secondly, and maybe more importantly, I wanted to make it clear from the get go what a fight with the Hook meant. The Hook comes from Grim Fears and is one of the most terrifying ready-made antagonists I’ve ever seen. He is, quite literally, pure fear and feeds off of pure fear. He’s a True Fae’s embodiment of slasher movie tropes, and whether he or those tall-tales came first is irrelevant at this point. All that matters is just how scary he is.

I didn’t want a pitched battle with Hook, a tactical ambush or a street brawl. That’s not what the Hook is. He’s there to stalk characters, make them run and hide until they have that one chance to make the blow that kills him.

All this being said:

If it’s been said once here at Gnome Stew, it’s been said a thousand times. Use your words and talk to your players. Some players feel like any in media res storytelling is taking away player agency and won’t put up with it. Others take a more relaxed attitude and generally will think “Yeah, that sounds like something my character would do” once you explain it to them.

Whether you’re starting a campaign or simply want to start introducing this technique at your table, sit down and chat with the players first. Does this sound fun to them? Are they willing to give up a little character agency for greater immersion and less having to be told by the Herald that the King wants to see them?

After all, above all else, you should be having fun.

5 Responses to In Media Res