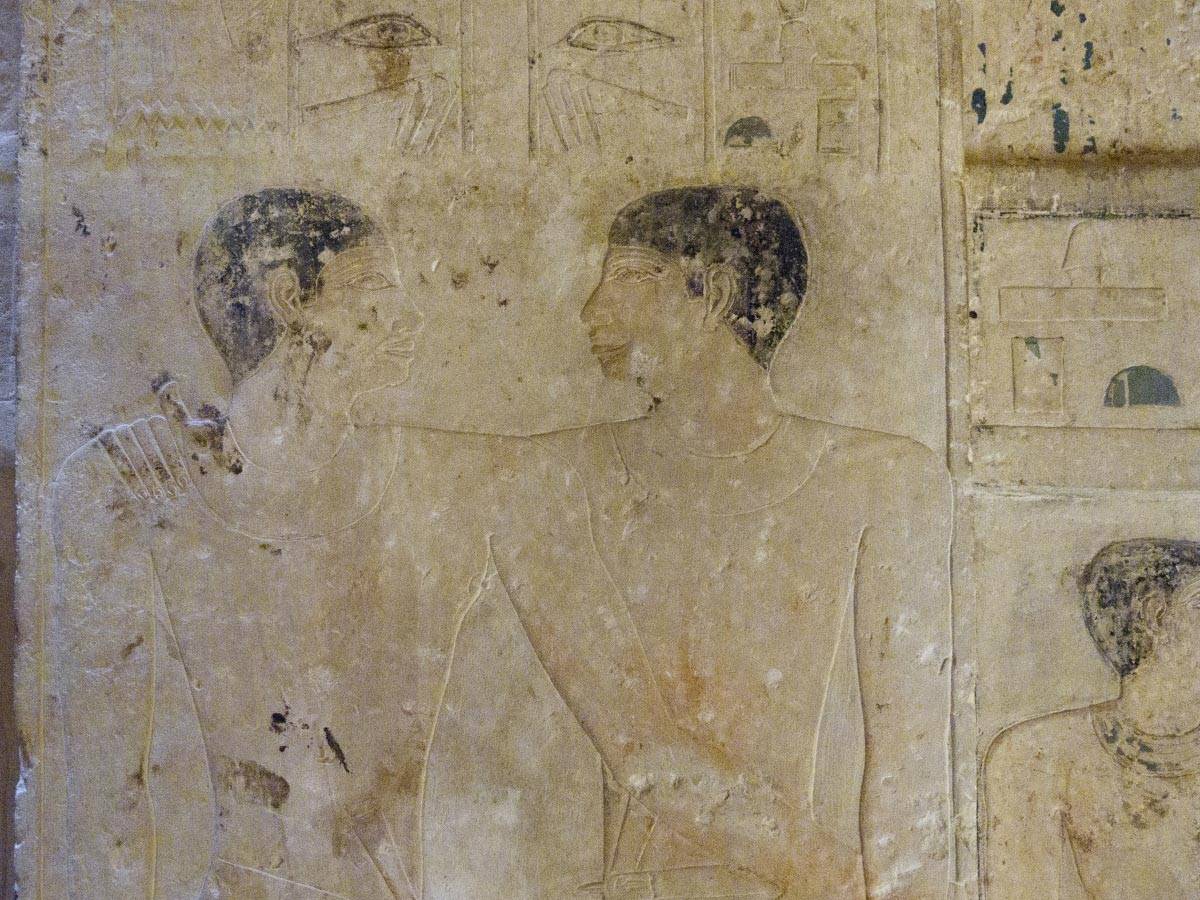 Our first history lesson comes from Ancient Egypt, and may possibly be the very first historical record of same-sex relationships. It’s important to remember that just because it’s the first record we have does not make it the first to exist. People have been loving people of the same sex for longer than history has been a thing. Someone deciding to write something down doesn’t mean it hadn’t existed before. That said, this lesson comes to us from the Fifth Dynasty of Egypt, approximately 2400 BCE. It’s really old. It’s the tomb of Niankhkhnum  and Khnumhotep.

Engraving from the tomb of Niankhnum & Khnumhotep, taken from Flickr by user Kairoinfo4u and licensed through CC BY-NC-SA 2.0

The most intimate of the images is at the entrance to their offering chamber, where they are shown nose to nose, kissing as their belt buckles touch, joining them at the waist.
Share8
Tweet10
Reddit
Email
Outside of what art survives the span of time, we don’t have much to go on for learning about these two men’s actual lives. They are listed in hieroglyphics as manicurists, hairdressers, and royal confidants. This means that they occupied a special position as one of very few people who could actually touch the Pharaoh. Tombs were extremely expensive, so the fact that these two shared one together meant that they were very powerful while alive. Both of their families were buried in the tomb with them, but the tomb was made specifically for these two. During the 4th through 6th dynasties, some experimentation was common with how tombs were displayed between husband and wife, speculation suggests that these two were able to take advantage of that experimentation to craft a lavish burial chamber for themselves.

It’s important to do some research before you hit the table, especially if you’re looking to address the subject material respectfully.
Share8
Tweet10
Reddit
Email
Cultural relativity also becomes important because if we start to project modern ideas of sexuality onto the past it becomes easy to connect stereotypes or caricatures onto history. In an interview with the Dallas Morning News, Reeder expressed some hesitations with giving a modern audience some historical information, saying “people laugh when you say manicurists.” A stereotype of many gay men, especially of men of color, is one of a grooming confidant, but that’s only a superficial modern take on what these two men were. It will be vital to respectfully address their position within the royal structure and the important role they played in court without engaging in harmful modern stereotypes. In addition, the western lens on ancient Egypt is fraught with exotification. Avoid the “jewel of the desert” stereotypes, the best way to do this is with research and context. Challenge some of the mythology we’re fed as westerners and look for papers or histories written by Egyptians about their own history.


Leave a Reply to Stralin the bold Cancel reply