Improve Your Game By Playing Boardgames 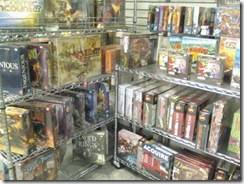 I tend to be a very story driven GM. I have a very laissez-faire attitude towards violations of rules in favor of cool things going on. It works well, but not always. I realize, in the course of running some games, that I often forget to make my enemies utilize their most deadly powers or I forget modifiers to their armor, etc. Usually it isn’t a big deal, but it is something that bugs me.Â  I’ve been trying to get better about it.

To that end, I came up with an interesting training exercise for myself. I’ve been searching out and playing boardgames and complex card games. I’m not huge into the boardgame scene. I enjoy Tsuro, I knock back a few rounds of Munchkin a month, and I’ve long enjoyed a risk obsession. I’ll play when my friends have something interesting. I’ll play at conventions when I have access to new ones. I’ll play anytime one is available. Unfortunately, most of the people in my group aren’t major boardgamers.

One week passed between the session that I got the boardgame idea from and the next session. During that week I played 3 different boardgames and 1 cardgame. The games were Carcassonne, Arkham Horror, Colossal Arena, and some goblin building machine cardgame. The next week, at game, I was thinking in a different way. I had aÂ  cleaner grasp and forgot mechanical aspects less. I still played with the usual story-driven emphasis, but when the mechanics needed to be front and center, I had a quicker implementation.

Boardgames are mechanical by nature. In few boardgames are there elements of story trumping the rules. Immersing myself solely into that mindset worked to train the areas of my brain that deal with the mechanical elements of a game. So, if you find yourself in need of some training, do 30 reps with a boardgame or a complex cardgame. It will help you reawaken that mechanical aspect of your mind.

(Picture was taken at Ahzz’z Arena . It is a nifty FLGS in my area.)

19 Responses to Improve Your Game By Playing Boardgames