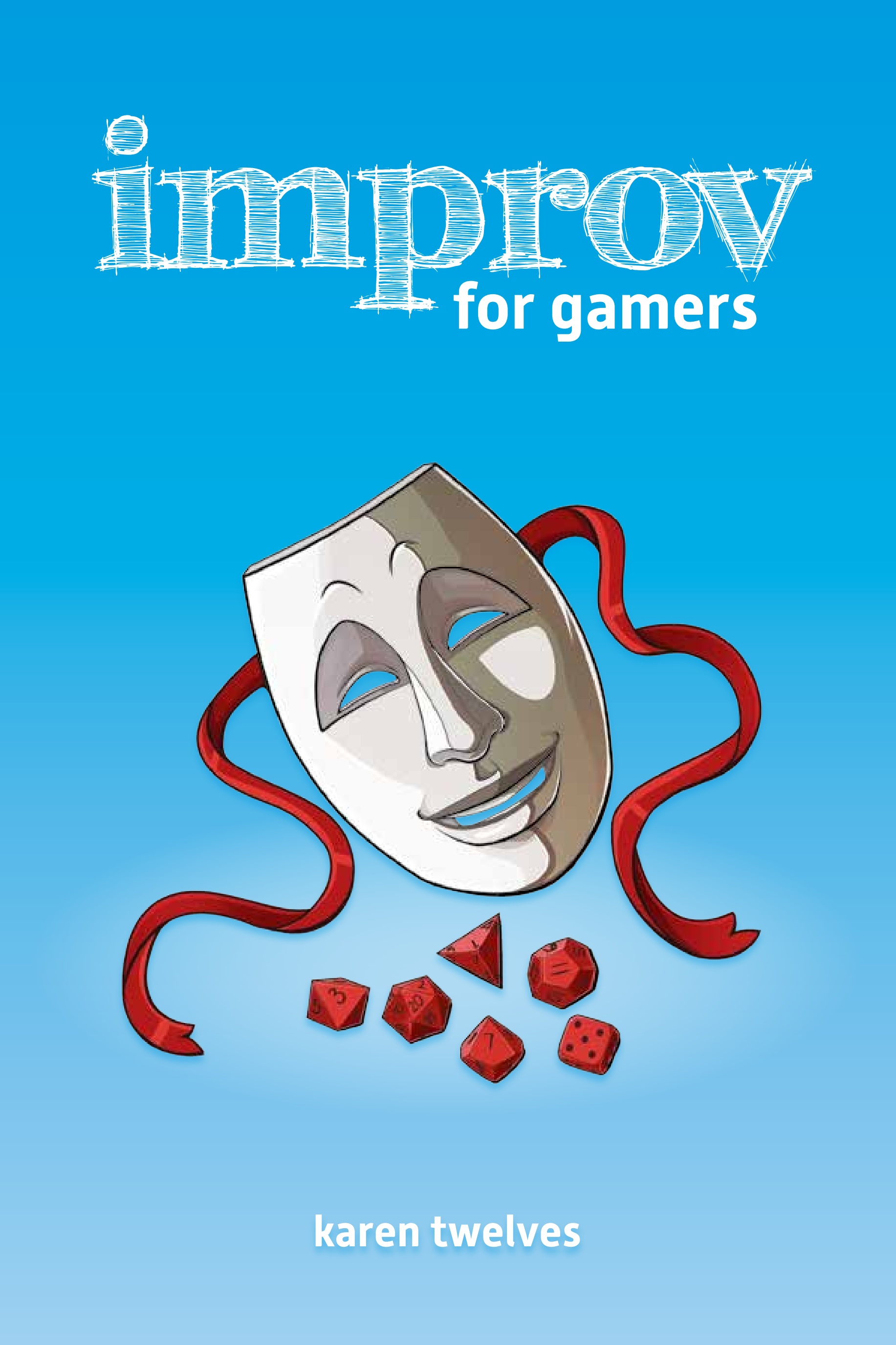 No matter how well planned out an RPG session might be, it’s hard to argue the need for improvisation. Some of the most prevalent jokes about running games deal with the degree to which the players do the unexpected.

But even considering that game moderators often have to roll with the changes offered to them by their players, players utilize improvisation even more frequently than game moderators. Many game sessions are predicated on the GM introducing situations for which the players cannot plan.

Because of this, it seems that improvisation is a skill that almost any gamer would benefit from sharpening. While modern games often contain more advice and tools for improvisation than older games, there aren’t many books aimed at creating actionable practice models to create a broad base of improvisational skills, with an eye towards tabletop gaming.

A recent release that has game-focused improvisational exercises is the book we are looking at today, Improv for Gamers, published by Evil Hat.

An Object In Space

This review is based on the PDF release of Improv for Gamers. The PDF is 112 pages, with two pages of ads at the end of the product. The PDF is black and white with line illustrations demonstrating several of the exercises introduced in the book.

The various sections include bolded headers, bullet points to explain procedures and call-out boxes to provide more information and context on the various exercises.

What This Book IsÂ

The opening section of the book is an explanation of how the product came to be, why it might be useful to gamers, and best practices in utilizing the material. Originally developed as a one day workshop for incorporating improv techniques into roleplaying games, it grew into a program presented at conventions, and eventually into a stand-alone guide for running the workshops.

The advice on how to use the book includes a description of the various types of exercises, which include the following:

The section then discusses how to pick exercises to use, the procedure to follow after exercises, best practices for making the individual exercises work, and the importance of being kind, positive, and authentic. 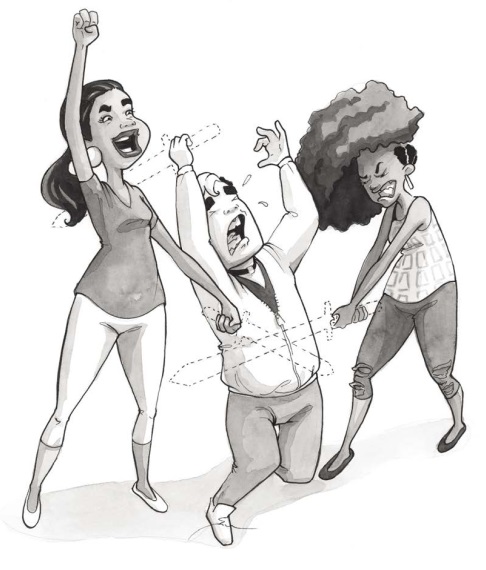 All of the chapters have a similar structure. They introduce the general goals of the type of exercise, explain the specific details of an exercise, present a bullet-pointed list explaining the process for performing the exercise and may include call-out boxes for tips, and a section for expansion where you may wish to add or change elements of the previously presented exercise.

The explanation for the goals of the exercise often include examples of how the exercises relate back to different situations in roleplaying, so you don’t feel as if you are broadly increasing skills that may come into play at the table, but you can actually evaluate what a particular exercise may help you improve.

Warmers are exercises designed to “break the ice” and get a group ready for doing more detailed exercises later on. Compared with later chapters, this one (understandably) has the least advice on specific table ready applications learned in the exercises.

The exercises in this section include:

These exercises are all centered around participants adding details to a scene, and other participants interacting with those details while adding their own. There is a nice introductory section that discusses the concepts of “yes, and” as well as “yes, but,” “no, but,” and “no, and.” There is also discussion on how to turn down offers that cross lines that you personally have, and that “Yes, and” often exists within an agreed upon setting, which helps establish boundaries.

The character chapter is about developing traits and details for a character that make them into a unique person. The focus is more on coming up with small details to build on, rather than deep backstories that don’t address what that person is like in more mundane circumstances. It develops mannerisms and answers questions about how being a certain thing informs reactions to other characters and events.

Status, in the context of this chapter, deals with characters and the state they are in. How do they deal with complications or ongoing troubles, and how can they bring to bear aspects to resolve those troubles or challenges? It also discusses status as an aspect of who has the advantage or the upper hand in a scene, and how that can shift.

The Timing chapter deals with learning the proper amount of time to spend in a scene, or with particular elements in a scene. It also deals with reaching a pivotal moment in one scene before cutting to another scene, and then back to the original scene.

The Scenework chapter deals with longer scenes, where the action in the scene lies, and what to include in the scene. It addresses broadly the concept of “what do you do?” that is the key driving component in roleplaying games.

This chapter is comprised of the following sections: 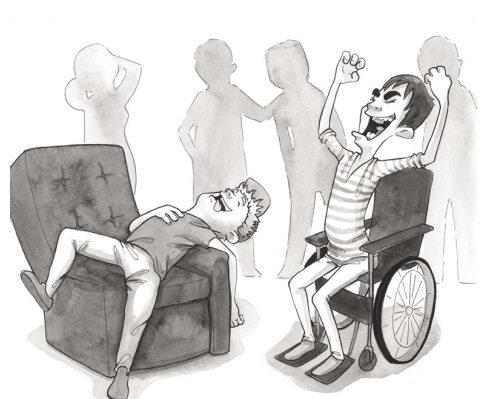 The glossary is a section that is referred to in several of the other chapters, as it describes the terms used throughout the rest of the book. While some of the terms have fairly obvious meaning, there are often specific meanings in the context of improv scenes.

Appendix A through D

Appendix A discusses physical boundaries, emotional well-being, and different hand signals and words that have specific meanings in the context of the improv exercises presented in the book. It also discusses the importance of setting expectations before an exercise and checking in with everyone after the exercise.

Appendix B has page references to some of the call-out boxes that appear throughout the text, as well as assembling lists related to some of the exercises, for things like locations and relationships, to review between exercises, so that people have ideas fresh in their minds when they need random ideas.

Appendix C includes a list of recommended reading materials, broken up into sections that deal with improv in roleplaying games, improv in theatre, and improv in life in general.

Appendix D is a series of recommended games, games that specifically utilize improv elements and may have specific suggestions about using improv in play as well. These include suggestions for tabletop games and live-action games.

Yes, and . . .
Â While many games give specific advice on how to use elements of improv in that specific game, this book has a wide range of exercises that can help build improvisational reflexes, regardless of system.Â

There are a growing number of RPGs that stress improvisational elements, and it is clear that some degree of improvisational skill enhances even the most traditional RPG at times. While many games give specific advice on how to use elements of improv in that specific game, this book has a wide range of exercises that can help build improvisational reflexes, regardless of system. Unlike general advice, the exercises are specifically actionable and have some great insight into how these improvisational skills relate back to gaming.

While I think many gamers will gain some useful insights just from reading this book, the most utility is going to be found by actually working through the exercises. Some gamers may not be comfortable with that, and others may not want to spend the time away from their actual games to develop broader skills. That’s not the fault of the book, but it does make it slightly less of a broad recommendation. There will also be a time investment for the facilitator to determine how many of these exercises to run, which ones to run, and how much time to allot for them.

It is also a minor point, but the Space Objects chapter feels less applicable to most tabletop games that aren’t going to employ props but may still be useful for games that do, as well as for LARPs that may require object interaction.

Qualified Recommendation –Â A product with lots of positive aspects, but buyers may want to understand the context of the product and what it contains before moving it ahead of other purchases.

If gamers have the time to devote to the exercises, and the willingness to participate in them, I think this book provides a lot of useful content for developing skills that will improve overall RPG enjoyment. Time, coordination, and a willingness to fully engage with the exercises are going to be the most important determining factors.

Do you have a story of a roleplaying session that was better for the improvisation that took place? Do you have any particular techniques or best practices that have helped your gaming group? We would love to hear about them below. We’re looking forward to hearing from you.