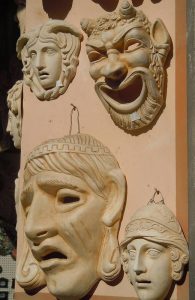 The many masks of a GM.

Recently, I got into an argument. On the internet. Shocking, I know. How could such a thing happen? No one ever argues on the internet! This particular argument stemmed from a discussion on GMing. In another internet group, a friend had come across a request for GMing advice, but all the tips given felt adversarial and old-school to him, prompting him to bring the subject up to his friends. Obviously, I have some opinions on the role of the GM, but someone else countered that the GM should be an impartial arbiter and nothing more. The discussion was on!

The conversation stayed civil, despite differing opinions, but it did get me thinking. What is the ideal role for a GM to take on? Should they just be an impartial arbiter, just observing the players and making judgment calls when necessary, or do they become as invested and involved in the story as the players by being the fan of the players? And what about the deadly foe that GMs used to become as they plotted deadly traps and difficult challenges for their table?

Thanks to John’s review of Designers & Dragons, I’ve been avidly reading up on the history of gaming. It’s been fascinating looking at how the hobby began, how it has grown and changed over the years, and how it continues to evolve today. Between being birthed as an offshoot of the war gaming hobby, and the early emphasis on tournament play, it’s not surprising that many games in the 70’s and 80’s were rules heavy and encouraged the GMs to keep their players at a distance. Over time, rules have generally been simplified or streamlined and the secrecy and distrust that was fostered between player and GM has (mostly) disappeared.

I’m a fan of the rules light, story heavy style of GMing many systems advocate for today, but I think it’s absolutely worth examining other styles. Not only can it improve your skills as you pick and choose techniques from different methods, but it can allow you to provide a more diverse game for your players that might have different tastes.

Take for example the ‘Impartial Arbiter’. As it was stated in the original discussion, it felt too clinical and disinterested. For me, the game can’t be just about playing referee. I need to be a bit more invested than that. If I can’t be a fan of the PCs and the adventures they’re having, I’m eventually going to lose interest in the game. At the same time, if the GM is too invested in the game’s story, it can be easy to start taking control back from the players and railroad them to the interesting bits you want them to experience. Remembering to remain at least a teeny bit impartial can give the players the freedom to take the game in unexpected but exciting directions.

What about the ‘Friendly Guide’? Not exactly the direct opposite of the impartial arbiter, this style focuses on bringing the game world and its inhabitants to life. This one is probably closest to my style, as I love trying to bring the wonder of the setting to life. If I can get the players to get excited about a place I’ve described or an NPC I’ve introduced them to, I feel like I’ve done my job. The downside is that you can get too caught up in the world to pay attention to what the players really want to get out of the game. Just like an author spending pages describing a scene can get boring as you wait to get to the good bits, your players need to interact with the world, not just wonder at it.

Then there’s the ‘Deadly Foe’. Many of my early GMs fell into that category and I’m actually quite glad that things have shifted away from that. As a player and a GM, I want action and adventure, not random death. That said, it’s important to remember that most players actually do want a challenge. There’s a great deal of satisfaction in defeating an adversary that could have won the encounter. This is something I have to work at, since my tendency is to make fights a little too easy. When I remember to give my players something truly challenging, their eyes light up and they dig right into doing their best to outsmart me and defeat the bad guys.

I’ve oversimplified a couple of categories when there could be dozens. Most of us are a more likely a combination of styles than any one GMing trope. On top of that, just as the games we used to play have changed over the years, so have our GMing skills and techniques. I would be surprised if anyone is running a game exactly the same way they ran it ten, fifteen, or even twenty years ago.

What about your style of GMing? I’m curious how different people have evolved over the years. Let us know your thoughts on the subject.