I’m Your Number One Fan

Recently at Con on the Cob, I ran a one shot of Monster of the Week and also stumbled into an opportunity to play Dungeon World. Both games use the system first created in Apocalypse World, and while I’m not completely sold on Dungeon World as a replacement for long-running D&Desque games (either D&D or Pathfinder, pick your poison), there are some integral concepts to the games that really speak to my narrative GM soul. One of the primary rules is simple and actually kind of profound in the grand history of roleplaying games: 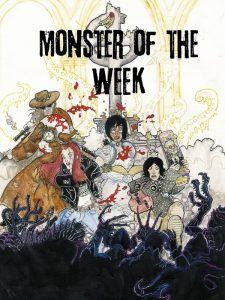 This system makes it so easy to run a Supernatural or Buffy game.

It might be a little melodramatic, but I can almost hear the collective gasps of shock across time from thousands of basements in the vast suburban landscape of the early 80’s. Maybe that’s a little unfair since the best GMs have always understood that a good game is fun for everyone at the table, but an adversarial relationship between the GM and the players was considered to be at least somewhat normal. Even today many GMs that were introduced to gaming with that style of play still take a certain glee in causing a TPK (total party kill) or in finding other ways to frustrate and impede their players’ characters. I recall one particularly creepy GM from just a few years ago that was actually cackling maniacally (without the slightest hint of irony) as we voluntarily entered the dungeon in front of our characters.

Whether you call them World Games, Ax Games (Apocalyse x), or simply Powered by the Apocalypse (PbtA), these games require a give and take between the GM and the players that absolutely requires the GM be rooting for the PCs to do interesting and amazing things. With the narrative nature of the system, the GM has to cede control to the players on occasion while the players need to trust the GM to provide them with choices that make the game’s story interesting above all else. If a GM were to take on an adversarial role, the game would quickly spiral into something that’s not much fun for anyone at the table. At their core, the World Games understand that EVERYONE is there at the table to create stories filled with adventure and awesome.

Being a fan of your players’ PCs is probably one of the most resonant GMing suggestions I’ve ever had explicitly spelled out for me. The longer the idea sunk into my brain, the more it made sense. If what I love about RPGs are the stories we bring to life, then why wouldn’t I be a fan of the central characters in those stories? The other thing that struck home was that, as integral as the concept is to World Games, it’s something that can be applied to any roleplaying game.

D&D? Sure. Pathfinder? Of Course. Savage Worlds? Yes. World of Darkness? Absolutely. Doctor Who? You MUSTÂ be a fan. Call of Cthulhu? Even there, insanity and all. Paranoia? Well, maybe not… just kidding! It doesn’t matter which system you’re running, bringing a desire to see the PCs be their best can only improve the game for everyone at the table.

This doesn’t mean you don’t want the PCs to have obstacles and challenges, though. Things being too easy for the PCs would be boring for everyone. Having hovered at the outskirts of several different fandoms, I’ve seen some folks take being a fan of a character to mean they don’t want ANYTHING bad to happen to that character and any writer or director who puts a beloved character through troubled times is evil incarnate. While sometimes creators can go too far (I’m looking at you, Martin, Moffat, and Whedon), it’s absolutely crucial to remember that what makes us fall in love with these characters is often how awesome they are in the face of adversity.

As a GM, I don’t want to go easy on my players and their characters. I want them to face down trouble with panache and style and come through the other side of adversity with a well won victory. I am absolutely rooting for them to do awesome things, and it doesn’t matter which game I’m running. I’m going to be their number one fan.

10 Responses to I’m Your Number One Fan